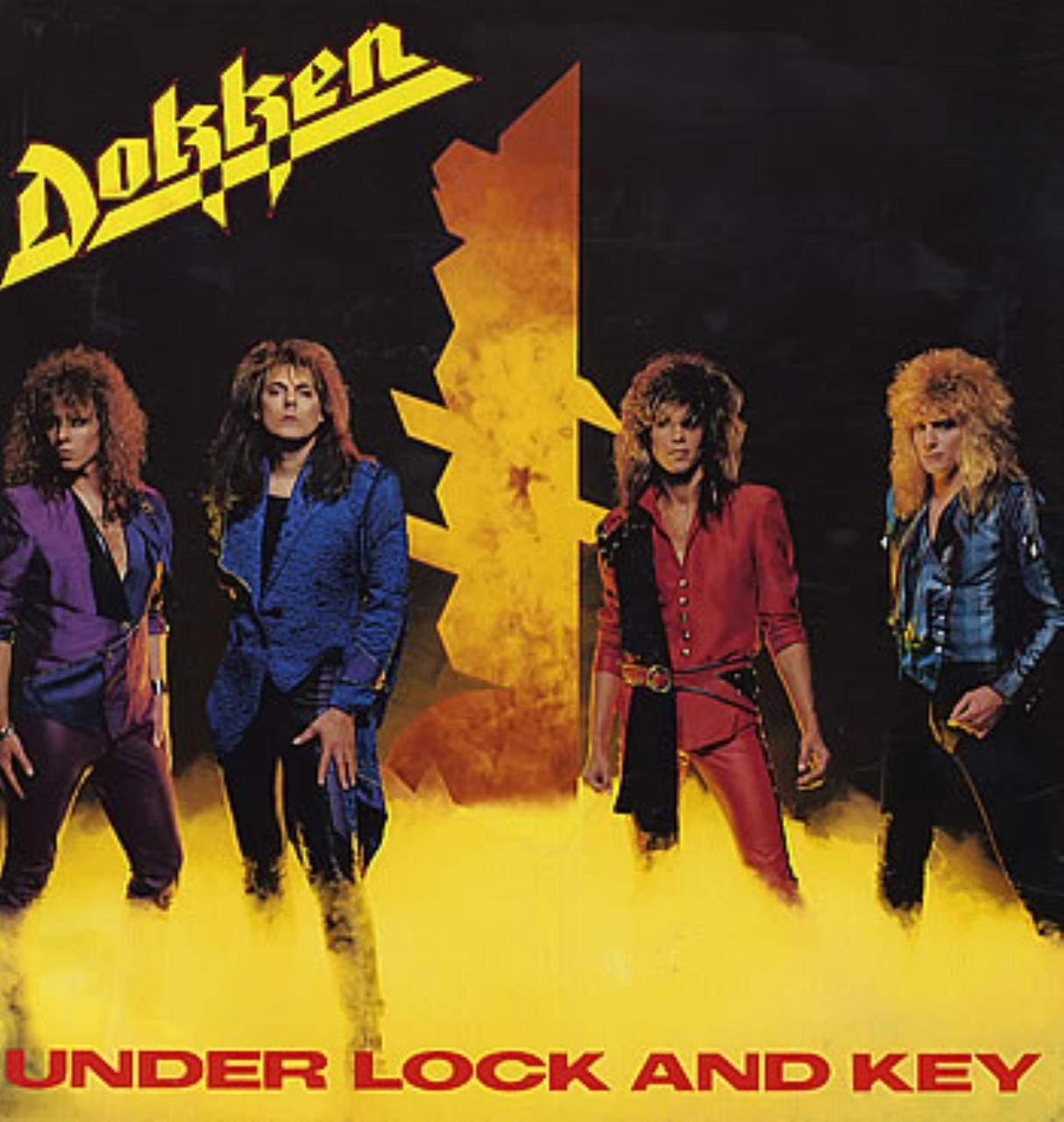 “I don´t know what´s going on now? The Jay Z´s that are billionaires with their own cologne and their own vodka and you have these stupid girls with big fat asses, the Kardashians. Why are they famous? They´re famous for being famous. What do the Kardashians do? Nothing. They sleep with basketball players and they make babies and they argue on TV. It´s really stupid and embarrassing. It´s changed. Back in the day it was real movies and you watched MTV and it was great. When MTV came along it was amazing. “

I was wondering a bit about your last name Dokken and the Norwegian heritage? There are actually a lot of people called Dokken in the US.

Don: I meet them once in a while. They come to shows and they ask to see my driver´s licence. Mostly I´ve met my relatives though. I´ve met my grandfather´s family and all the Dokkens on my father´s side. They´re like 85-86 years old now. They live in Minnesota. It´s the same climate as in Sweden. It looks the same with the rolling hills. Sweden´s beautiful and Norway too and when you go to Minnesota you go “Huh, it´s like a little Norway.” When I played with AC/DC I checked out the phone book there and there were like tons of Dokkens, but it´s not a common name in America. I didn´t meet anyone with the Dokken name for like 20 years. When we first came out, everybody called us “Doken” and I´d say “Didn´t you go to English class? When it´s O it´s Dokken and when there´s umlauts, it´s “Doken”. Swedes know that, but in America we had to come up with that sticker that said “Rockin´with Dokken”, so they would get the name right.

What got you into music in the first place? What was it that made you wanna be in the music business?

Don: I never really wanted to be in the music business. I did it because I started playing guitar. My mom bought me a guitar and I just started noodling like every little kid at 12 years old. In 8th grade I had a little band and I played “Louie Louie” and stuff like that. I was a little kid, but there wasn´t anything like “Oh, I´m gonna play guitar and get a band and be famous!” Never thought of that. Even in my 20´s I didn´t think about it. I liked playing the scene and playing the Whisky A Go Go and the Starwood, but I didn´t think it was gonna be a living. I thought we´d do it for fun, get the girls… Do you remember the first record you bought?

Don: It was a single and a song called “Incense and peppermints” (1967) by the Strawberry Alarm Clock. It was like a psychedelic sitar and I went “What the hell is that?” and Mick knew it too. Very psychedelic during when Jimi Hendrix was coming along. The first album I ever bought was the first Cream album, “Fresh Cream” (1966) and we listened to it over and over and over and I´d slow it down and try to copy (Eric) Clapton´s guitar parts and that´s when I started really playing guitar seriously. The first five years of Dokken, it was before George (Lynch), I was the lead guitar player. I played the guitar and I played the solos. George doesn´t remember it that way, but he doesn´t remember a lot of things correctly. When “Breaking the chains” came out it was called Don Dokken. There was no band, it was a solo album. I paid Mick 2500 dollars and George played on the album and they didn´t wanna join the band. They wanted to go back and make their own band and I said “Ok, goodbye!” Then they went back to LA and they were sleeping in their cars and then they said “Well, maybe we should go play with Don?”

Was there something else you wanted to be?

Don: Yeah, I wanted to be a chef or build cars. I built my first car at 13. A 56 Chevy I bought for like 25 dollars. I had the manual and figured it out. I like cars and I´ve built a lot of cars in my life, but it´s just fun and a hobby. I was a cook and I played the bars on the weekends. I cooked in the daytime and then I´d leave and go do the clubs. But it´s silly to say “Oh, I´m gonna make a living of this!” Every musician says that, but honestly, the odds are like one in a million.

Do you still cook?

Don: Yes. Me and Elisabeth cook at home. We´re foodies and we like to cook Chinese and Thai food and Indian food. We find stuff on the internet and watch YouTube and we figure it out.

About your home, I saw a video you posted about your garden?

Don: It´s big. It´s in a place nobody knows about really. It´s between Santa Monica and the Palisades on the ocean and it´s called Rustic Canyon. It´s two blocks off Sunset Boulevard. It looks like you´re in the mountains. I have a couple of other homes in Beverly Hills, but yes, it´s a big home. It´s two acres and the river runs through the properties and I´m building a pond right now. It´s a fucking lot of work! There´s a lot of trees and they´re over a 100 years old. All the water in the Santa Monica mountains comes down into LA and the river comes out in this one spot and it´s only like one quarter mile and that´s where these homes are. It´s very expensive to live there and nobody knows about it. There´s only one road in and one road out. I can walk in my river down to the beach. It´s a nice garden and I work out there every day. We have a gardener who comes twice a week, but Elisabeth and I just go out there every day. It doesn´t take care of itself. It´s big and if you have 6 million bucks, you can have a garden like that. It´s expensive and that´s why I don´t show the house. If I show you the house, you´ll think I´m bragging. It´s a big house.

Have you always been into gardening?

Don: Mick (Brown) always says “Every time you buy a house, the first thing you do is dig a hole and make a koi pond.” I don´t want a flat yard, it´s boring. I dig a hole and I make a waterfall. I´m a Buddhist and I like to meditate and I like fish. It´s just beautiful to lay in bed and hear the water running. We have seven waterfalls in the garden and I´m building two more. When I lay in bed I can hear water running everywhere. Jon (Levin) always says “It´s like walking in the jungle.” But it´s just for fun. A lot of fans ask what I´m doing when I´m not on tour and I go “Garden.” and then they go “Yeah, but you can´t garden every day?” and I just say “You haven´t seen my garden” Or our garden. It´s not my garden. It´s Elisabeth´s and mine. It´s a strange neighborhood. It´s literally five minutes to the beach. Goldie Hawn lives there and a lot of musicians there. Ray Manzera lived there and a couple of the Eagles. There are no lights in the streets and no sidewalks, so it´s like in the country, but you´re in LA. They´re not giving it away. You gotta sell some records.

Do you ever get nostalgic about the good old days, the 80´s when you still sold records?

Don: Yeah, I mean, I don´t know what´s going on now? The Jay Z´s that are billionaires with their own cologne and their own vodka and you have these stupid girls with big fat asses, the Kardashians. Why are they famous? They´re famous for being famous. What do the Kardashians do? Nothing. They sleep with basketball players and they make babies and they argue on TV. It´s really stupid and embarrassing. It´s changed. Back in the day it was real movies and you watched MTV and it was great. When MTV came along it was amazing. There was no commercials, no Kardashians, no reality TV. It was just music. That helped the band a lot. We probably got lucky that we came out when MTV came out, to launch us in. Now there´s no radio. It´s owned by Clear Channel in America and they only play what some girl in New York says. The only time you can hear Dokken, is on Sirius or satellite radio on Hair Nation. I said I wasn´t gonna make another record and then Jon said “Why not?”. It´s because we like to do it. It isn´t about the record sales, because I think that everybody who knows me personally, knows that I don´t need the money. It´s not about money. I feel bad for other bands from the 80´s. They made a lot of money, millions, and they have nothing. I can´t say who because it´s not my place to talk badly about anybody. They have nothing. There was the partying, the strippers, the wives. Alice Cooper says “They complain about how they marry a stripper and she took all the money. She´s a stripper. You should´ve known that when you married her. Thay´re not exactly doctors or lawyers, they´re strippers, so don´t complain if she takes your Ferrari.” But it´s nice to be able to play music because you want to. Two weeks ago I played in Quebec with Slipknot. Dokken and Slipknot, hhmmm? Kinda strange, but the guys in Slipknot were watching us. Everybody´s writing books these days. Have you ever thought about doing that?

Don: Yeah, I have a standing offer and two companies have offered me quite a bit of money to write my autobiography. The problem is, that if I write my autobiography, people wanna hear the dirt and I don´t wanna write about that. Why? It doesn´t serve me to say… We´re one of the oldest bands, we came from Sunset Strip, I played with Van Halen in ´77 and I know a lot about a lot of bands and I´ve seen a lot of things, but why talk badly about it. Like Bobby Blotzer (Ratt) who made up this bullshit story. It says in his book that I slept with his wife. “I never slept with your wife. I´d like to sleep with your wife. But the truth is Bobby, she wasn´t your wife anymore, so if I wanted to sleep with her, I would´ve. You don´t own her.” I don´t see the point. Mötley Crüe did very well with “The Dirt” and they talk about heroin overdoses and such, but I don´t have those stories. I never did drugs. I could write about a lot of things I´ve seen. Memories from the Bon Jovis and the Whitesnakes and the Def Leppards and all that. That´s why I haven´t done it yet. I´m gonna write a book, but it´s not gonna be full of shit. I don´t see the point in talking badly about people in a book.