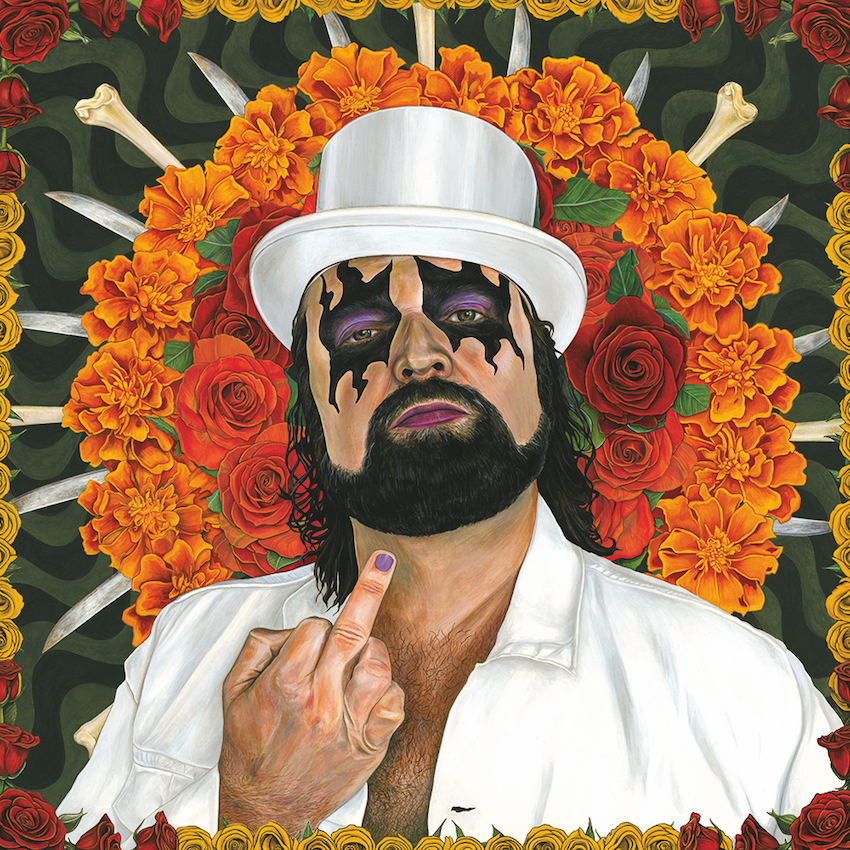 “A very good rock star must be able to be a very good actor also, but it doesn´t go the other way around. A very good actor is not necessarily a rock star. That´s very important. That´s a divine law, a universal law. Just like gravity.”

How did you put the band together?

Hank: It was actually a pick and choose headhunting process and they are hired guns. They were all chosen for a good reason and they were all surveyed pretty thoroughly.

When you wrote the record, was that a band effort or was it mostly you?

Hank: It´s mostly me and Cat Casino (guitar). Cat was necessary in the writing process because he is the lead guitar player, the wing man so to speak. My Randy Rhoads (1956-1982), my Zakk Wylde or my Mick Ronson (1946-1993). It was very important to have him in the creative process and and we were very aware of that Dead Said Fred (drums) and Jean Genus (bass) were going to be the rhythm backbone and I wanted to have Major Sam (rhythm guitar) with me from Norway since I´ve been working with him for so long, I knew what he could perform. They were recruited and hired to do the job and are all doing good jobs. When did the writing process start?

Hank: It started in February this year and during the first month and a half we were pretty much sure of how the record was going to be and we were pretty set with the songs. Then we started tracking in Gothenburg for real with all the musicians and by then all the songs were readily written so we didn´t write while we were tracking. That actually proved to be a very effective way to have thought through the songs and all the arrangements and lyrics.

This was done very hush hush. Did you still set a deadline when it needed to be done or did you just take it day by day?

Hank: No, we soon discovered how fast we could do it and what would be a good release date. We could more or less foresee what challenges we would have and have backup solutions for every situation that could arise. It´s been a pretty safe recording process. It´s not been about wasting budgets on limos and shit, you know. It´s not like in the 70´s where you got a record deal and a million dollars and two or three years to make an album. We knew what we were doing from day one, or we found out pretty early on what we were doing. It was, with all our experiences, possible to foresee the turn of events and everything happened according to plan.

You said in another interview that it´s probably the most fun you´ve had recording an album. In what way and how come it´s taken this long to have fun while recording?

Hank: Well, it´s all about privilege really. You have the perfect producer, you have the perfect apparatus, you have the perfect guitar hero. It´s like painting a picture where you have all the colors you need to put your vision on canvas, instead of crashing into obstacles, disappointments or actually just not wanting to make an album. (laughs) I actually wanted to make the album and when Sony asked me to do it and the producer said he would produce it with me, we had some time to creatively get to know each other and had long chats and I realized that with this guy and this set up I actually wanted to do it. I could use all my experiences from my whole life to actually make the ultimate perfect album. The album in the sky.

Do you look at this as your best musical effort so far? Is the latest one always the best one?

Hank: You have to think like that or you will be totally fed up. Some great albums have actually been released with a lot of inner protest from the musicians and especially the songwriters and you can actually feel that. It´s a great album and it´s out there, but it actually left the artist damaged by it. The privilege here is that this didn´t occur because I actually have had eight or nine years to think about how a comeback would actually be and why would I do it. When I said yes, I knew what I said yes to and then it was just getting the job done and start a process and suddenly it was fun and no grief. I actually can listen to the whole album again and again like any other fan and nothing disturbs me about it.

These eight or nine years, was there a certain thing that made you go ”Well, this is the time!”?

Hank: Timing is everything. If I had been asked a day before I would´ve kicked the person in the face and if I´d been asked a day after I´d probably would´ve asked the person to go to hell. It was a day where all the elements I had figured out needed to be there to actually bother with a rock and roll comeback. I said ”Well, all these elements must be in.” and I never expected those elements to be in in my lifetime, but suddenly a phone call and all the elements were there. Then it was just going through the process of starting to write songs and it´s a perfectly timed album. A very well timed comeback with all the elements in it.

Where did the title ”Egomania” come from? Do you feel like you have a big ego?

Hank: Well, it´s my job. If I wanted to be meek and humble I would´ve climbed up into the mountains, sitting… it´s actually the… what to say… it´s the truth. Hank von Hell is a very self centered artist and will spread all his love to everybody on his own terms.

As a professional musician and so on, don´t you have to be egotistical in a certain way to get where you want to go?

Hank: Yeah. To live next to this kind of artistry must be a pain in the ass. I can sit for days and nights just inventing my universe and calculating and create this weird universe and then force the world to follow it. You´ve done some acting, is that anything that has helped in any creative way when it comes to writing music?

Hank: Of course. When I was a kid I started out acting and Hank von Hell is acting. It´s a cracked actor. (laughs) That was what made rock and roll great for me, for instance when David Bowie (1947-2016) added the cabaret and theater elements into rock and roll and made it into an unrealistic (tabloe) and then suddenly rock and roll and acting went hand in hand. A very good rock star must be able to be a very good actor also, but it doesn´t go the other way around. A very good actor is not necessarily a rock star. That´s very important. That´s a divine law, a universal law. Just like gravity.

The future then? What are your plans? The tour starts in Stockholm. Is it world domination?

What´s your own favorite track on the album?

Hank: I have this weird thing where it changes from hour to hour. For me it´s all about mood swings, it´s about the day of the week. I have weekend hits, I have waking up going to work hits, going home from work hits. (laughs) It´s pretty much an album for life. You can actually use all the songs for different situations in life. ”Wild boy blues” is a very cool song to have on the album because it´s a little bit unexpected. It´s also a tribute to an era of rock and roll that hasn´t been tributed much lately. That Cali, glam rock, David Lee Roth, Aerosmith thing going on there and that is a part of rock and roll that I think has been missing for a while because it´s about a good rock and roll for a good living and kicking ass and having fun. It´s not like a rebel song, it´s about the reason people choose to be different because it´s cool. ”Fuck the squares!”, you know, but you don´t have to hate them, You just have to have fun and then you don´t have to bother with the people that annoys you or whatever. The best rebellion is always to have a great time and ”Wild boy blues” is actually about that.

Another cool song is ”Too high” I actually read recently that Rob Zombie once got so high that a doll started talking to him. Ever had any dolls talking to you?

Hank: Nah… (laughs) Not anyone worth mentioning.

Are you a fan of the Sunset Strip scene and bands like Mötley Crüe and Ratt and so on?

Hank: Yeah! I love that shit. Driving a convertible and putting ice tea in the whisky bottle so people thought you could handle shitloads of whisky, but you couldn´t. That was really cool, I think. Punk came to me a little bit earlier because we live in Scandinavia and punk was very important and needed for various reasons in Norway and Sweden, but that was a rebellion thing. The Sunset scene was more like an exotic dream. Also when Ozzy did his solo thing with ”Bark at the moon” (1983) and it was actually motivating to have a rock and roll that could fit into dreams while the punk rock thing was more like the shit you´re in. Luckily Billy Idol came and made a crossover link, so suddenly it was ok and you didn´t have to choose anymore.