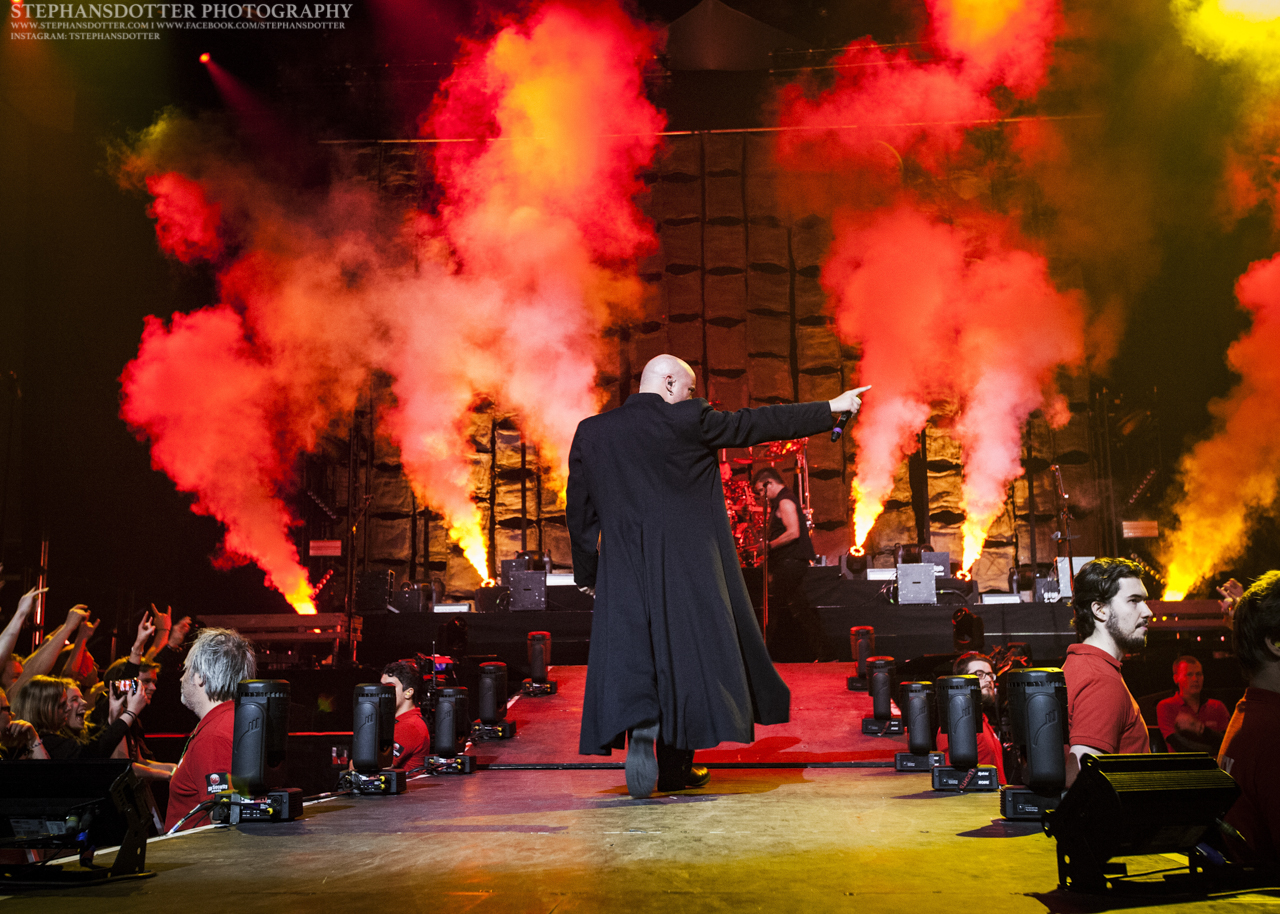 That one could´ve definitely been like ”lightning only strikes once”, but we try to use it as inspiration and motivation to head down that path even further. You mentioned being around for 25 years, it´s great to still feel fresh and still feel like we have a lot to offer, especially creatively and not just physically on stage and giving it, but creatively and we actually feel like we´re writing some of the best songs we´ve ever written right now and we have a lot more to give.

The band´s been around for 25 years now. Pretty impressive.

After all these years, do you still have goals as a band?

I don´t know that we necessarily have goals per se. I just think that we´re relishing in the fact that we´re still here and still climbing. It´s been a nice, slow, steady climb for us and it´s been great to just be able to still expand around the world and expand our fan base. The shows are incredible. We get to see all walks of life, all age groups… you know, people are bringing their kids out to the shows and it´s been pretty incredible. You had a massive hit with ”The sound of silence” (Simon and Garfunkel) Was there at any point when the song really took off, that you guys felt ”Damn, wish we had written that one!”?

Yeah… I don´t think it was conscious in the beginning when we started to toy with it in the studio and when it was finished we felt like we had something pretty special. Then to see how well it was received all around the world was definitely like an ”Oh shit!” moment. Again, we thought it was special, but we didn´t realize how many barriers it was going to break down for us. We have older people our parents age listening to the band for the first time and it puts us on the radar of people that may not have heard of us before and it´s pretty fun.

What made you pick that song? Were you just looking for a cover song?

Yeah, we do it all the time. We´re always throwing ideas at each other and we were in the studio that time and it was one of the last things we did during that record process and we had been talking about it for weeks, making suggestions and this and that and nothing was really striking us and I happened to mention ”Maybe we go to a different era, like the 60´s?” and they were like ”Ok, what you got in mind?” and I said ”What about Simon and Garfunkel?” and they said ”Ok, well, what song?” and I had mentioned ”The sound of silence” and they were like ”Ok, we might have something here, so…” David loved the lyrics, they really drew to him and Dan (Donegan) took it even the next step further and said ”Well, not only do we do the song, but let´s take it completely different… let´s go with the haunting vibe and still keep it Disturbed, but not what people know us as what Disturbed was, like the ´Land of confusion´ heavy version, but take it more orchestral.” It was a great collaborative effort and now we have this big monster of a song and it´s such a huge moment in the set as well. Working on the song, did it come together real easy for you?

It was a little bit of a challenge, just because it was a little more outside of the box for us, but we really loved the challenge and it was also really fun as an artist to create outside of our normal comfort zone. It was very enlightening and encouraging and very exciting. I think it also helped open the door for us creatively. We had been talking about doing  your typical acoustic type songs  for years and years and that I think helped kick the door open for us creatively, so when it came to the ”Evolution” (2018) record, songs like ”A reason to fight” and ”Hold on to memories”, it felt even more natural. A little more familiar and it just helped us go down that road.

Having such a massive hit with a song like that, do you feel any kind of pressure as an artist to come up with something that will top that in the future?

I´m definitely not going to lie, yes absolutely. There´s always that pressure. We try not to necessarily think about it or at least not focus on it, like it being a weight on our shoulders. We are always trying to top the last record or the last song. That one could´ve definitely been like ”lightning only strikes once”, but we try to use it as inspiration and motivation to head down that path even further. You mentioned being around for 25 years, it´s great to still feel fresh and still feel like we have a lot to offer, especially creatively and not just physically on stage and giving it, but creatively and we actually feel like we´re writing some of the best songs we´ve ever written right now and we have a lot more to give. It´s really encouraging to know that 25 years later we´re not just playing ”The sickness” (2000) every night, which is amazing, but we still have all these other great stuff too. Do you have any memory of what other songs you were thinking about when it came to making a cover like that?

No, not really. The last couple of years we´ve been listening to  a lot of the older classic eras, the 70´s era bands and especially when it came to doing the ”Evolution” record and I just think that… again, thinking outside the box, a lot of stuff that comes out today and I´m not ripping on it and I´m not saying anything negative about it, it´s all very formulaic and it all sounds very similar, there´s not a lot of identity, so we just started going back to some of the old  school legends and just listening to how they´re created and that was a big influence on where we were when it came to the writing process. I don´t think that if a lot of those artists existed today, that they would ever get a record deal based on how the industry is today. It was nice to be able to have that freedom to be able to write songs and to write a record that could go sort of all over the place and go down different paths.

What are your memories of the first music that had an impact on you?

Simon and Garfunkel was actually a big influence on me. My father was and still is a huge fan and that´s where it was sort of ingrained into my memory… we always had this routine as a family, me and my brothers and sister, we were young back then and we had our chores to do and it was always Sunday mornings… my father would put on his music and he would crank up the stereo and he would assign us our chores and we always had to go in the house and do what we were supposed to do and it was like the soundtrack of my life, Simon and Garfunkel. Fast forward all those years later when it became time to suggest a song and I was like ”Why not try it?”, so it was very cyclical.

At what age did you get into metal?

I didn´t get into metal and hard rock until probably late teens when I was in high school. I was never really introduced to it before. I didn´t have any family members that were into it and it was more like bands like REO Speedwagon and Chicago. That´s what my uncles and stuff were into, which I love. It´s stuff that I listen to today. Then when you´re young and full of energy and looking for a little bit of aggression, I was introduced to Mötley Crüe and Iron Maiden, Judas Priest and Black Sabbath and all those classics and it was like a whole new world. I feel like I grew up in a really great time of music, being able to pull from the 70´s and live through the 80´s. Have you seen Mötley Crüe´s ”The Dirt”?

I did actually. I recently  saw it. David Draiman has said that “Evolution” is your ”Black album” (Metallica). Do you feel that as well?

That statement was taken out of context. It wasn´t that we feel we´re to the level of Metallica or the level of Metallica´s ”Black album”, it was more so how that was a big jump for them and their career, that´s what that statement was meant to be. So in that regard, yeah absolutely, we do feel it was a big turning point and a jump for us in our career as far as evolution of our sound and the band.