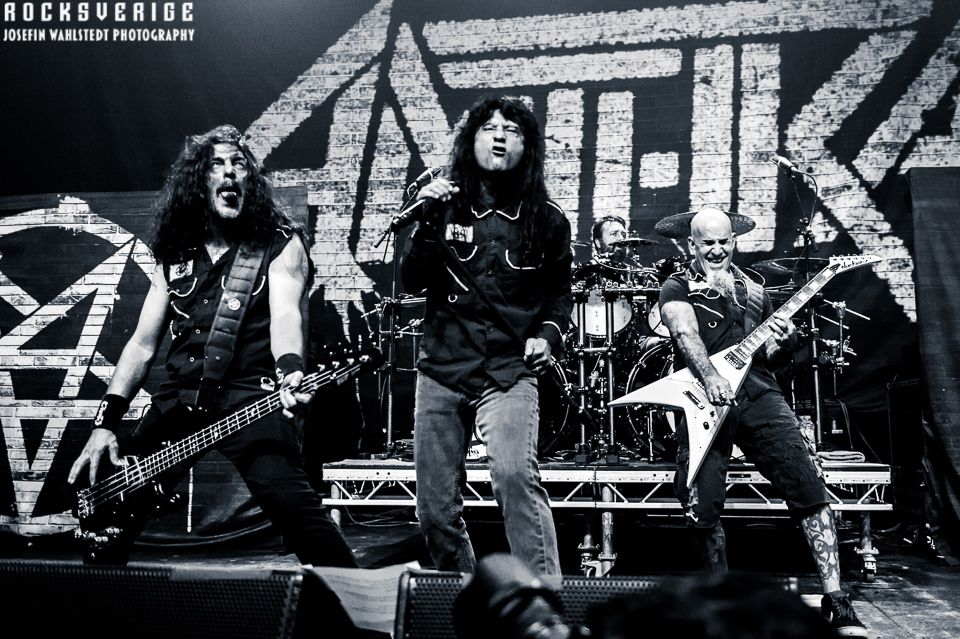 I finally brought out all my old Motörhead 45´s and I wanted Lemmy to sign them. Lemmy looked at them all with his eyes real wide and said “Pick five!”. I picked five, the most cherished ones to me, and then he looked at them and said “Good choice.” and signed them all.

Charlie: I think it´s somewhat of a continuation, which is just a natural thing that would happen. It just seems like the obvious thing to go with and continue something that we felt really strongly about.

I read that you went into the studio with about 20 songs, but there´s only 13 on the album, correct?

Charlie: A goal of mine was to have 20 songs. To write 20 really good songs and then we´d have the choice of choosing which ones we´d want to be on the record. We managed to finish something like 17, so we have a few more. Scott just ran out of ideas lyrically. I could see them coming out in the near future.

Does it get harder or easier coming up with new songs?

Charlie: This time it became enjoyable. I was in my studio and I was just coming up with riffs and songs. It was just good momentum and the ideas just kept coming. I would say the first batch of songs were very much in the thrash type of sound and then it started to go in a little different direction. It´s just a variety of songs. I really wanted to make the album really complete and really interesting for the listener, not just a one dimensional album. I wanted to have multi layers.

Does it happen while recording, that there´s always one song you end up working harder with than the others?

Charlie: Some are harder than others. Some just come together right away. A lot of the time I would send demos to the guys, like a whole piece of music, and then there were some songs where I would come in with just a couple of riffs and then we would put it together in a rehearsal room or something. I would say that half of the songs were pretty much demoed and pretty much done from start to finish. I was just on a roll. Do you have a personal favorite on the album?

Charlie: I have a few personal favorites. There´s one, “Blood eagle wings”, which is pretty close to me. The song “You gotta believe”, is one of my favorites, because I felt like there was no compromise on that song. The song is going to be as long as it is. It has a killer middle section and it´s back to the good old days of making 6-7 minute songs, you know.

What did Jon (Donais) bring to the album?

Charlie: What I felt that Jon brought to the album, is another dimension. As a matter of fact, we were digging Jon´s leads so much that we would write more sections into the songs so that he could play more. Every song has a guitar lead. He´s great and he´s a great guitar player and I think he gets it.

The last song on the album, “Zero tolerance”, was written about the horrific events that took place in Paris. As a musician and playing all over the world, is that something that will forever be in the back of your mind when you´re on stage, or will that fade away by time?

Charlie: There are two things that always go through my mind when I play a show. First thing I do, is I look up and look at the lighting truss. Make sure it looks fucking good and if I see something fall, where can I go to be safe. The second thing I do, is that I always look to my left and to my right and who´s on stage. The Dimebag thing really had a bad effect on myself and so many others. The thing about what happened in Paris, is that I don´t know how to prevent that, more than have more metal protectors at the door and more security. You´ve suffered from Carpal Tunnel Syndrome. Is that something you have forever or does it go away?

Charlie: I had surgery for it and the surgery came out great. The only problem I have is that after like three weeks of touring, my hand is hurting at that point and I need to take a rest. It´s just that pain again and that tightness and numbness. That´s my only issue. The older you get, the harder it gets.

A lot of icons are leaving us these days, like Lemmy and David Bowie. What did Bowie mean to you?

He broke through a lot of barriers in music and art and fashion and these days it just seems so much harder, because it´s all been done and it was all done by those guys. Would you agree?

Charlie: I would agree with that for the most part and then there will always be like a Lady Gaga that will come out and you go “What the fuck is that?” and just does it with a different likeability. Now days, sometimes it´s not even about the music, it´s about the style and the look and the music is secondary. A lot of it is just so marketed, that it´s shoved down people´s throats and it becomes likeable, because you can´t avoid it.

With Lemmy, you get the feeling that from the day he was born, he always said what he thought and there was no bullshitting. It takes a certain kind of man to be like that.

Charlie: I think Lemmy had that kind of attitude that was his, sex, drugs and rock and roll. Let´s face it, when Motörhead were doing what they were doing and I´m talking about the heydays, Motörhead were playing rock and roll. They were playing music like ZZ Top, but they were doing it with such an attitude and such a roar that punk rock fans, heavy metal fans, rock and roll fans, all enjoyed it. They were one of the first bands that you would see someone into punk rock wearing a Motörhead shirt, someone into heavy metal wearing a Motörhead shirt. It became so iconic that that´s what you would see at the shows. You´d see a mixed bag of people, which I thought was a the greatest thing. Do you remember the first time you met Lemmy?

Charlie: The first time was in 1986 (Spreading the disease tour) and he came to our first show in London. We played the Hammersmith Palais and Lemmy was backstage and it made my whole night. The last time I had a really god conversation with him was towards the end of the tour in October before the cruise (Motörboat) and we were doing some shows together. We were in Connecticut and I finally brought out all my old Motörhead 45´s and I wanted Lemmy to sign them. Lemmy looked at them all with his eyes real wide and said “Pick five!”. I picked five, the most cherished ones to me, and then he looked at them and said “Good choice.” and signed them all.

Do you get star struck?

Charlie: Yeah, I got star struck with Jimmy Page and with Paul McCartney and Ringo. I was like “Oh my God!”. The first time we ever went to the Grammys, James Brown was there and I never got the nerve to go over to him. I just saw him like in the distance and I was like “Oh Jesus, it´s James Brown!”

Could you pick an album you couldn´t live without?

Charlie: Probably Sex Pistols. Never saw them though. When they did that reunion tour, I was on tour too, so I never had a chance to go.

With “Worship music” you played like 300 shows. Will this tour be the same and you´ll tour every corner of the world?

Charlie: If it´s up to me, I´d say “Maybe not every corner.” We´re out doing shows now and they´re going really well. We introduced a new song last night, so I think we´re gonna try and fit that in now.

How do you pick songs to play from a new album?

Charlie: I don´t know. That´s the choice of ourselves and maybe the listener who chooses which song. There´s been time we´re we´ve felt that we wanna play this song live and when we play it, it doesn´t work. We´ll see. I´ve always been a fan of “Bring the noise” which you did with Public Enemy. Could you see Anthrax do something like that again?

Charlie: Eeehhmmm, yes. Maybe there is going to be something in the near future that may just be like that. (laughs) No details yet, because if it doesn´t happen I don´t want people to be “Oh, I read…”, you know.

Back in the day, did you start out with drums or guitar?

Charlie: I started with drums and taught myself how to play guitar, because I really couldn´t convey a piece of music on the drums to somebody. I had to learn how to play the guitar, so I just worked on it and worked on it.

Which is more fun?

Charlie: Guitar is more fun. I can sit and play guitar all day. I enjoy playing drums, but I almost feel like I have to play the drums. (laughs) Guitar to me, is just like I can sit down on a chair or couch and just play.

When doing so, do you end up with stuff that is not like Anthrax music?

Charlie: Oh, it´s different. It comes out both sides. Sometimes it´ll be something really nice and sometimes something really evil and mean and I know which one goes where. I just love when it just comes.