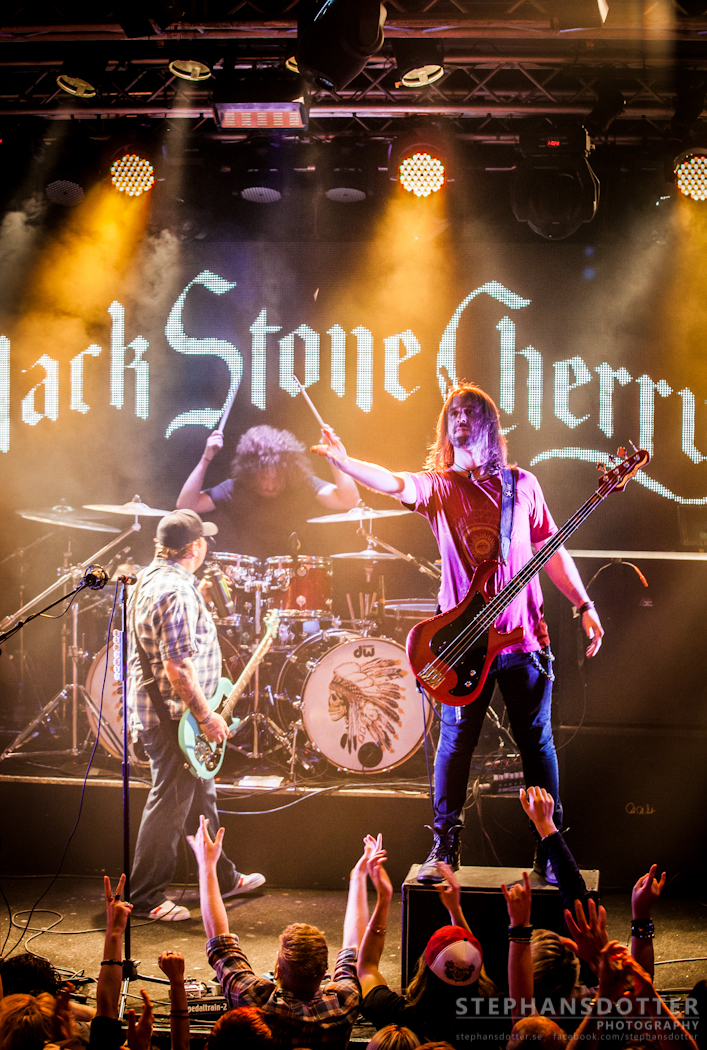 Tell me about the new album ”Family tree”?

Ben: We´re really happy with it. Of course we self produced it like we did with our last album (Kentucky, 2016). Chris (Robertson, vocals) mixed it, which is a first for us, having someone in the band mix the album. It´s more of an organic and raw approach to our songs and music than what we´ve done in the past. Getting into the hardcore influences of the band and what we grew up with when we started to play and listening to. Two songs kinda stand out for me, ”My last breath” and ”James Brown”. There´s a lot of soul in those songs.

Ben: Right. ”My last breath” is a very special song and a very personal song. It´s basically the lone ballad on the album. It came out fantastic. We knew when we wrote that song that it was gonna be very special and we´re very proud of it. It came out great with the soul singers in the background. ”James Brown” is just a fun tip of the hat to James Brown himself. A fun, cool, funky rock and roll song, but it´s still us and it´s still southern. It has the horn break down at the very end of the song and it just has a different element that we tried to bring out on this album.

Do you think you could explore more of that soulful sound in the future?

John: Possibly. We did the blues EP (Black to blues, 2017) and that kinda led us to digging a little bit deeper into the writing on this album, to have a little bit more of the blues and soul roots. Between this cycle and the next, if we do another EP, it could be blues or soul or funk, jazz or… you never know. I think that anytime that you spend the time or invest the time to learn anybody else´s music, whether you mean for it or not, it´s gonna influence you.

You´ve done several albums now and you´ve played for a long time. Has your own record collection changed? Do you listen to more different things these days?

Ben: I think our musical taste has always been rooted in older stuff. For me personally I know, but I think I can speak for all of us, your musical taste may evolve and grow if anything. That´s what happened with us with this record too. We were listening to more of the bluesier stuff and the southern and classic rock stuff and that side really organically started to come out in our songwriting for the new record. We all continue to grow our musical pallet, personally and collectively as a band. It only helps you in the long run. John: I don´t think it´s so much a southern sound that anybody has ever tried to achieve. If you look at a band like Lynyrd Skynyrd for example, those dudes had no idea that they were playing southern rock back in the early days. They were trying to be like British rock, that was a big influence for them. Ultimately, what it comes down to, is where you´re from and who you are as a person and it´s more of a lifestyle kind of environment than it is necessarily a particular sound that you try to go for. It´s a genre all to itself just based upon who the people are.

How do you feel you´ve evolved or changed as songwriters if you compare this album to your first one back in 2006?

Ben: I think we´ve been able to tour all over the world, so you see new things and you get inspired and influenced by new things and you learn. We´ve written with different people over the years and you learn things from them. And I think as long as you do it, you just kinda own your skill pin. For us, from our first album, which was our first ever album, but in the same regard we kinda took that simplistic approach with what we did with our first album to recording our new album. We didn´t go into the studio with a dozen different amplifiers and a bunch of different effects and this and that. We wanted to go more simplistic. I think it´s what our fans want and that´s why this album sounds like it does. It´s just special, because it sounds organic and loudly and fun spirited. It has that naive edge to it that our early record does. Our early record was naive because it was naive, but this one is us stripping back some of the overthinking and it´s just us going in and just plugging and playing.

That organic feeling. A lot of bands today are talking about that analog sound. Is that something that comes more and more now as a counterpart to the digital world?

John: Man, we´re never gonna change it. We ain´t gonna stop it and there´s no point in fighting it. The best thing you could possibly do is just learn how to evolve and co exist. All it comes down to is that back in the 70´s and before and so on and even after for a while, bands would go out on tour to support a record. Now we release records to support the tours that we do. It´s just as simple as that. Bands don´t earn money from selling records these days unless something crazy happens. Where bands make their money is from people coming and seeing them at shows and buying merchandise and that´s it. The whole digital age, it is what it is. You can either latch onto it and utilise it as a tool to help broaden your fanbase or you can fight against it and lose. Warren Haynes (Govt Mule) is on the album. How did that come about?

Ben: We met Warren years ago in New York when we were showcasing for a record label in 2004. We met him briefly there and then we saw Govt Mule play last summer at home and we talked to him after the show and we just briefly brought up the fact of us working together and her liked the idea, so when it came time to get into the studio or shortly after that, we knew that we wanted him to be a part of the album. We had this song ”Dancing in the rain” and we thought it probably best fit his voice and guitar work. We e-mailed him and asked if he wanted to be a part of it and lo and behold he said he loved the song and would love to. He was on tour at the time so we sent him the track and he found a studio once he was home from tour and recorded his parts one night and sent it back to us and we were just blown away. It was an honor.

What would you say is the biggest lesson learned so far in your career?

Ben: I don´t know really. It´s a good question. We continue to learn lessons every day and with each tour and album. I´m not sure what the biggest is…

John: I would more say the biggest rule. With us the biggest rule of thumb is to always keep the four of us together and as closely knit as we possibly can. When we tell people that we´re friends before we´re a band it´s not a joke. We´re constantly in communication when we´re at home. We don´t just hit the ground and scatter as rats. There´s barbeques at our houses, there´s Super Bowl parties, Halloween parties, there´s one particular restaurant that we´re all big fans of and we eat there all the time. If anybody ever goes there, there´s an immediate text messaget that goes out to all of the band and the crew. We´re a family. What would happen if one of you decides to leave the band for some reason? Would you continue or is it you four guys or nothing at all?

Ben: I think we´ve always looked at it as it´s us four or nothing. Honestly, if somebody makes the decision and say ”I don´t wanna play.”… If I came to the guys and said ”Guys, I don´t wanna play music anymore.”, it´s not fair to them to stop. I would leave that choice up to them.

John: We would stop. (laughs)

Ben: If something, unfortunately, would happen to one of us, I don´t see it going on. It would be hard, it would be impossible.

You´ve met a lot of cool people through the years. Is there anyone that you really look up to that you´ve actaullay met?

Ben: We got to meet some of the guys in Aerosmith – Tom Hamilton, Joey Kramer and Brad Whitford and that was pretty special. We got to meet Jimmy Page which was incredible. All of Skynyrd, Def Leppard, Whitesnake. We´ve gotten to tour with some pretty amazing groups. Bad Company, ZZ Top… so we´ve been very fortunate to have met and played with some epic artists. John: You turn into a 12 year old school girl.

Ben: Yeah, it´s kinda hard not to clam up with somebody that you´ve just seen pictures of in magazines.

John: He told me he dug our band and I couldn´t really say anything. I just looked at him like ”Eeehhhh…” (laughs)

Ben: It´s a pretty incredible thing and you just take it for what it is and try to sink it in.