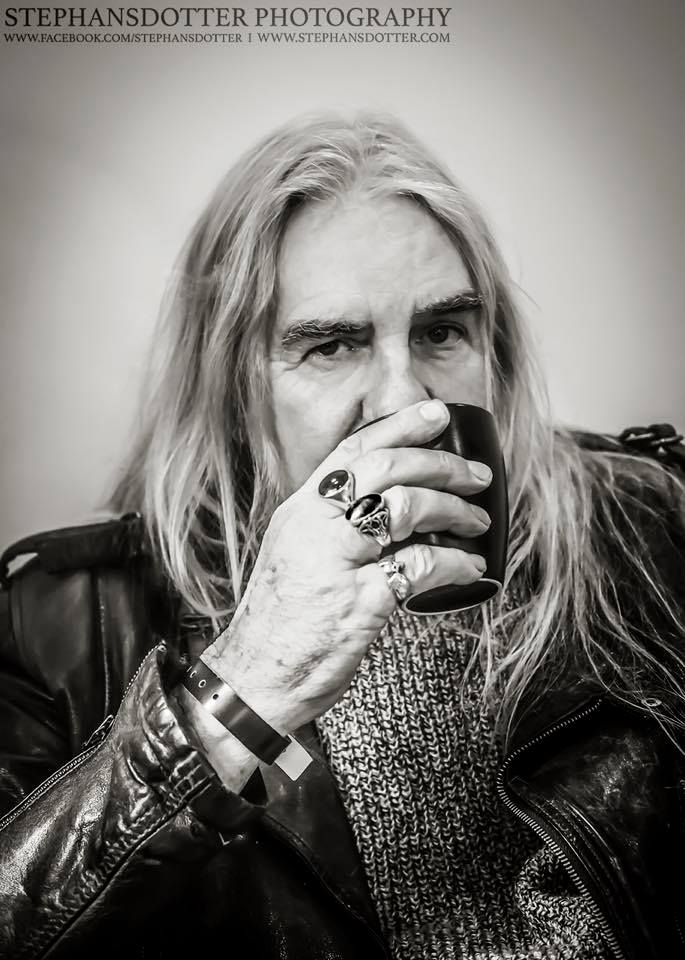 A couple of years back you mentioned to me that the first Montrose album was a bible to you back in the day, but there´s no Montrose on the “Inspirations” album?

No there isn´t. I wanted to do either “Rock candy” or “Bad motor scooter”, but for some reason we preferred the songs we recorded. We did play it and we also played “Pretty vacant” by the Sex Pistols, we played Uriah Heep, KISS “Detroit rock city” There were quite a lot of songs that we tried, but we just thought that the songs we picked were the best ones.

You also mentioned that “Closer to the edge” (1972) by Yes was an album you listened a lot to.

Yeah, I wanted to do “Roundabout” (1971), but Yes is not the easier choice because there´s a lot of keyboards in there. If we do another album, then we´ll definitely do another Yes song. We need to think about it. This album was done very quick. We thought about it in October, recorded it in November and it was finished in early December. The way I produced it is very live and it was quick. All these bands were like teenagers when they did these songs and I was trying to get that spirit. Doing at 70 is quite a challenge but it worked out pretty well. We used this big house like in the 70´s and played music, this great music, for two weeks and recorded it live really.

Was there any song that a band member brought to the table where you just said no right away?

No, not really. I can remember some things that Nigel (Glockler, drums)brought that were a little bit obscure, but I can´t remember what they were. When you´re doing an album like this, my criteria for the album was to only have songs or bands on there that influenced us or inspired us to be able to become and do what we do. I think we had to be honest and keep the idea that that´s what it is. Everybody´s got their favorite tracks of Deep Purple for instance and the record company threw their ideas in and there were some really bizarre ideas, so we more or less kept it to ourselves. Obviously I was producing so I suppose I had the last choice, but I think it is a pretty good cross section of what we all wanted. Some people wanted different songs, like I think some of the guys wanted to do “Highway star”, which for me was a little obvious. “Speed king” is more of an influence to me. I wrote songs like “Motorcycle man” and things like that, which are actually linked to “Speed king” It´s not everybody´s number one choice for a Deep Purple song, but I think it worked perfect for a Saxon song.

Were there other Rolling Stones songs that you thought about, besides “paint it black”?

No. Doug (Scarratt, guitar) wanted to do “Paint it black” which is a dark song, a dark key and it was the first song I ever learned to play on guitar. It was quite influential for us, or definitely for me and Doug. We did it more rocky that the Stones version, more hard rock I think. I did a second voice on top of my voice, so I wasn´t singing in Mick Jagger´s key the whole time because he sings quite in that sort of range whereas I tend to sing lower. It worked really well.

Have you met any of the guys in The Rolling Stones?

I don´t think so. I might´ve said hello to Ronnie Wood at some awards ceremony, but I haven´t met him for a pint or anything.

Did you ever see them back in the day?

No, I never saw the Stones. I saw Led Zeppelin and the Small Faces and things like that. The Bath Festival, the Lincoln Festival and the Isle of Wight Festival, all the big bands of the day were on there.

Did you ever think about putting a Van Halen song on the album?

The first Van Halen album was in 1978, wasn´t it? I think Eddie Van Halen definitely influenced some of the guitar playing of Doug and Paul (Quinn, guitar) as well. I thought he was another Jimi Hendrix really. We could´ve done a Van Halen song definitely, but I don´t think they were much of an influence on us.

What was it like chilling out with Mötley Crüe back then?

Well, cozy. Actually, chilling out at that time at Donnington was a bit boring. They didn´t really have any girls around, so they were all sitting there but they were pretty cool. Just chilling really and talking about old days.

The first time you saw and heard Eddie Van Halen, was it to you as it was to so many others, that it was something really special?

Yeah, I think so. I suppose they were the new Led Zeppelin, but they were great. Charismatic singer, great drummer and the bass player did his thing. We didn´t do any of theirs (for the album), but maybe if we get the chance.

Tell me about the upcoming album with your son? Any titles and so on?

The record company wants to call it “Biff and Seb” or “Seb and Biff”, but we would like to do it with a band name and we´ve got the name “Heavy Water” I quite like that name. We have a working title called “Red Brick City”. We´ll call it “Heavy Water” or… I don´t know. The working title might change. As we speak at this moment we´re doing bass guitars. I´m playing some and Seb´s playing some. When I finish talking to you I´m going back into the studio.

What is “Red Brick City”?

Me and Seb. He´ll sing a song, I´ll sing a song and we´ll sing a song together. He plays guitar and I play bass and a friend of ours is playing drums, so it´s a three-piece band at the moment. We might add some stuff but I don´t know. Again, we´re recording it pretty quick and live, just like “Inspirations” really. Very similar to my solo album, a very similar production.

Is it in the style of your solo album sound wise?

I would say that it is, yes. The songs are also, stylistically, very similar to the “Inspirations” album. There´s some laidback stuff and there´s some heavy stuff. I wouldn´t say there´s any prog rock on there, but there are definitely two or three metal tracks on there. Seb´s a great songwriter and he likes to play heavy guitar riffs, so I´m sure people will be interested.

It´s pretty cool. We´re both pretty set in our ways so it´s working really well. It´s great for me and for him, really. I´m getting off on his excitement and his first time doing things and he gets off on my that wisdom that I´ve learned over the years.

I know you´re working on a new Saxon album. How many more Saxon albums do you have in you?

Well, we have one more contracted album after this (Inspirations) , so there´s one more album definitely and we will make that one in a big house. The new album is coming out in February now, which is why we´ve got these albums around. We wanted to work together and Seb´s band isn´t doing anything either and it´s even worse for a new young band because they´ve got no outlets for playing gigs, so getting together to me and using some songs he´s written and songs we´ve done together is a good work ethic.

After that next Saxon album, do you see yourself continuing?

I don´t know really. We have to see. I mean a lot of it depends on live shows. We love to make records and then tour and play seven or eight songs live. That´s the whole circle of life thing for rock bands and all that have stopped for the last two years. I think getting back to that point again is quite important.

I quite like the video clips you post on your fb page. You´re out biking or walking the dog. You had a health scare recently. How did that change your approach to life, the stuff you went through?

I think it makes you less sort of worried about where things are going. Enjoying things while they´re happening. Just enjoy yourself while you´re here. Doing the “Inspirations” album and the album with my son… I probably wouldn´t have done these before I had the heart attack. I think the heart attack changed my … being a little more open to those types of things. Not just keep releasing Saxon albums every two years, but do something else as well. It´s important.

Do you see yourself continuing on with music the way Lemmy did? All the way to the end, so to speak?

I probably think so. (laughs) I suppose it depends on what sort of illness you have really. If you have an illness connected to your performance, like your throat, it all depends. I think you have to take it a day at a time, especially where we are now. Every day is the same and you can´t do anything, so you try to spend time with your family and try to be inspired to do something. I´m a very driven sort of guy and I like to create things, especially music. I think a lot of people have taken up crafts, like painting or drawing.

It was between “Innocence is no excuse” (1985) and “Destiny” (1988) and we had a long time after “Crusader” (1984) and then we got a contract with Emi, which wasn´t great for Saxon. Our musical style changed a bit with that album. It was a very successful album and tour, but I think we lost quite a lot of our hardcore fans. I think “Rock the nations” was an intent to appeal more to our hardcore fans again. It was more of a produced album. I remember it being very fun. We made it in Holland and I think Def Leppard were there at the time. We had a great guy called Gary Lyons produce it and he had worked with The Stones, Elton John and things like that. He was a funny guy, but he was going through a few private problems so he was drinking a lot. There was a lot of boozing going on, but it was good fun. Whether it´s one of our great albums I don´t know. A lot of people like that album, especially around Scandinavia and a lot of people were turned onto us with the “Innocence is no excuse” album.

On “Destiny” you did a cover by Christopher Cross, “Ride like the wind” Who came up with that idea?

Me. It´s the best song on the album I think. (laughs) The producer did a lot of keyboards and I think he thought he was doing Meat Loaf and not Saxon. We needed a song that was a bit more upbeat and I think the band was in a bit of a bad place then and the guitarist couldn´t write a song, so I just said “Why don´t we do this?” and me and Paul spent a couple of days transforming it into a rock song. It worked out pretty well actually. It got a lot of airplay for us and it´s still a big favorite of mine that song.

What would you say is the biggest lesson you´ve learned in the music business after all these years?