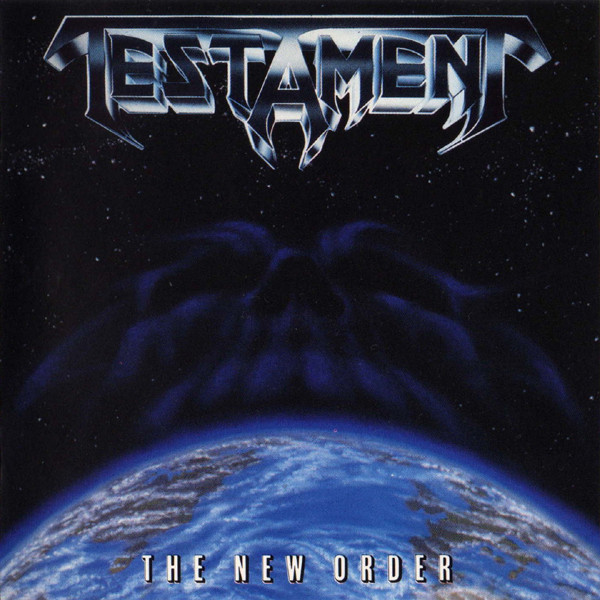 When we talked a few weeks ago, you told me a funny story about you chasing James Hetfield around a football field. (Read here: https://rocksverige.se/intervju-eric-peterson-i-testament/)

Yeah, he was saying my demo was all Slayer and I said ”Fuck you!” and then he said something else. I went to grab him and he started running and he´s laughing at me, running and eating his burrito and we both had Carlsbergs or something. It was funny. And my cousin Debbie liked him and she was kinda mad because she was up in the bleachers waiting to hang out and I´m on the football field chasing him. I don´t think he remembers that. I brought it up to him one time at Kirk Hammett´s Christmas party and he was like smoking cigars and he went ”I think I remember that…”

What are your earliest run ins with Metallica?

I was like one of their number one fans when they first came here (Bay Area) and I kind of made myself known to them. I had the weirdest running ins with them. There was this one show… I think it was Accept on the ”Metal heart” tour. I was younger and probably wasn´t able to handle my liquor very good and I was talking shit to a scalper and he popped me in the mouth and knocked my tooth out. I got into the gig and I think I was drinking 7 and 7´s, got kicked out and I was outside crying. James came walking up with all his entourage and I walk up to James and go ”Dude!” and he was like ”Hey, Eric! Fucking Eric!” and he ended up getting me back into the club. I was walking around showing everybody my tooth and the next day I was like ”Fuck, what an idiot!”. I kind of learned my lesson a little bit. I just realized that ”The new order” turns 30 on May 5th. What are your memories of that album? I read that you initially didn´t have enough music for the album according to the contract, right?

Yeah, we ended up playing everything a little bit faster. I mean, we had enough time, but we didn´t do anything to a click back then, so when we tracked it, we didn´t track it as a band, it was just me and Louie (Clemente, drums). I´m the guy in the band back then that… Alex (Skolnick, guitar) was always the guy that went ”Slow down!” and I was always the guy that would speed up, so I had my way. If Alex had been there, we probably would´ve been on time. Now I understand, but I just wanted everything to be faster and faster. Alex would probably laugh if he heard me saying that, ”I told you!”. We ended up coming with all these little segways like ”Hypnosis”. I had this little lick thing and Alex played a lead over it. We came up with that intro before ”Disciples of the watch”. I came up with that on the fly (sings) and Alex built off it. Just little things like that. Those were the things that we used to get our extra five minutes.

Yeah, and I think Chuck (Billy, vocals) wanted to do ”Whole lotta love” (Led Zeppelin, 1969). There are some really goofy… not goofy, but like ”What, that´s not us?” … I remember ”Nobody´s fault”… since we were all Aerosmith fans, that was the one dark Aerosmith song and it´s heavy. I think we just went a head and did it without telling anybody. I was kind of sneaky back then. My nickname was The Gremlin and Louie was Gremlin no 2. We actually had this song that Alex wrote and the music was like (sings) and then we had these lyrics about each member. First it was ”Eric, who´s all you can stand, he´s the guy who started the band, he gets away with things, you just don´t know why… that´s why we call him Gremlin one.” The next one was ”Lou, that´s why we call him Gremlin two.” and it goes around everybody and then there´s Chuck like ”He´s Chuck, he thinks he´s big, he thinks he´s grand, but we all know he´s got shit on his hand.”. He had this tattoo and it was gonna say ”Shithead” and he fell asleep when they were tattooing him with a Walkman motor and they didn´t finish it so it said ”Shi” so he´s got shit on his hand and people were like ”What?”. I wish we would´ve covered that. It would´ve been a really funny song to do.

So Chuck wanted to do ”Whole lotta love”?

I remember him saying that. That would´ve been a trip, because Chuck had a higher register then. I was always trying to get him to sing like Halford because he had the scream. Back then when we would jam we would be liquored up a little bit and I think he was a little bit more braver and then later he realized ”Well, I can´t drink every night.” and he didn´t wanna do these… like ”The Preacher” and me begging him and he was like ”Alright, but I´m not gonna do it live.” and of course everybody wanted him to do it live. He said ”That´s not me.” and we were like ”It is you.”. That was a good time, ”The new order”. I remember we came up with the title when we were jamming on it and we were discussing how our style of music, the genre, was like this new breed, even before they called it thrash metal, we knew it was something new and we were all talking about it and I was like ”It´s like the new order!” and everybody´s like ”Yeah, the new order!”. Then of course when we came to Europe, we were so excited because ”The Legacy” was praised and we walked into a room and there were like 50 interviewers and we were just sitting there with the record company and in ebvery interview it was like ”So, you know this is just a fad, right? Thrash is like rap, it´s not gonna last. What are you gonna do next year when nobody wants to buy your records anymore and you´re gonna be done?”- A lot of them were telling us this and we were all like ”We´re done?”. But thrash went a long way and it´s still here, especially Metallica. Metallica´s always been like a phenomenon. Now, in some places, it´s classic rock.

I think they´ve reached a level where they really don´t need to release albums anymore. They can still tour and play stadiums.

Thankfully they are and their last couple of records have been pretty good, so it´s awesome. When you were younger, what really got you into metal in the first place?

KISS. Just the scariness and the theatrics. Mostly Gene Simmons and Ace Frehley. Paul Stanley was more like the glam guy, but Gene was more like… there wasn´t death metal or anything yet, but somehow he just represented black metal, but there was no black metal yet. My first encounter with a hardrock record was the first Montrose record (1973) which was way ahead of its time. Ronnie Montrose´s guitar tone. Of course Black Sabbath, my parents had the first record and that one was just more kinda scary. But the first record that I really got into to like trip on, was KISS ”ALIVE” and the drum solo. Then ”All the world´s a stage” by Rush and we would just crank that up. Back in the 70´s everything was big and my cousin had the big Marantz stereo system and it just sounded killer. Then of course we were into Earth Wind and Fire and The Commodores and stuff like that. It was back and forth, ”Do Imlike Parliament or do I like KISS?”, we were going back and forth, you know. Rock ended up winning my heart and then as I got into grade school, I found out about Judas Priest and then it was just like all over. ”Hell bent for leather”, ”Stained class”, ”Unleashed in the East”… ”Unleashed…” was really the one that did it for me and then Iron Maiden came out and I was super into that but the singer (Paul Dianno) was a bit too punk for me. I thought he was a punkrocker, and the next record I bought was Venom´s ”In league with Satan” (1981). I lived kinda like in the country. My house was on a hill and there were no lights, no nothing. We took shrooms, me and my cousin, and that came on. I took the record and ripped it and threw it out the window. I thought that the devil was coming into my house and my cousin was laughing at me going ”It´s just music!” and I was like ”No, no no! We´re summoning him.”. Of course it ended up ruling me, so thanks Cronos.

Did you ever get to see KISS back in the day?

I ended up seeing them later. My parents wouldn´t let me go to shows back then. The first concert I went to… and this is not a joke… I was in 8th grade and I had to leave school on my own to go get my braces tightened. Day on the Green (1979) was happening and it was a couple of cities away. I was looking at the BART, the train system in the Bay Area, and I was like ”Do I go that way home or do I go get on BART?”. I got on BART and I ended up going and I saw Mahogany Rush, AC/DC with Bon Scott, Aerosmith, Ted Nugent… so that was my first concert and I remember going up to the very front and I looked up and there was Bon Scott and I was just like ”Fuck!”. It was awesome. It was all over after that. I was hooked. I got a lashing when I got home too. I was in trouble.