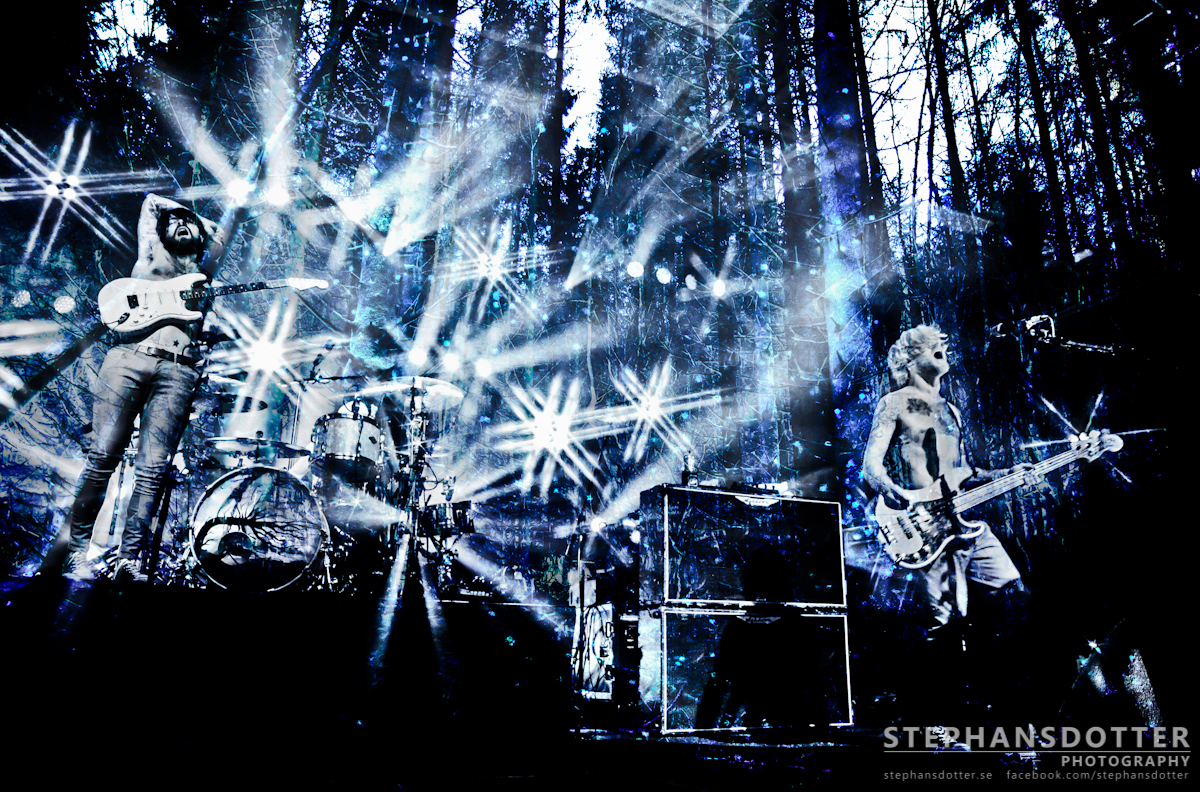 It´s been 20 years since your debut album “Blackened sky” came out. What do you remember from those days?

I remember being quite naïve really, says bass player James Johnston. There was no way we could´ve predicted we´d make a second album or a third album. It was really an exciting period. We went into a proper studio for the first time to work with a producer (Chris Sheldon) whose name we´d heard of and dreamt of working with before. It was really incredible and it was like “Ok, we´re with the big boys now and we have to behave.” Now, looking back, I feel what an opportunity it was. It´s a strange thing and I´m so grateful for what we have, but I appreciate that we´ve worked for it. We feel lucky but you can also make your own luck and I think you have to work for your luck and we´ve always worked hard as a band. I remember having fun. I remember it being fun, that´s what I remember. Maybe what you don´t know is quite important. You don´t know what you don´t know and I suppose the naivety of youth… we were just like eyes wide open and we couldn´t believe we were getting a chance to make a record and let other people hear our art. That was the thing. We really cared so much about music and then getting a chance to share that. It´s not often we look back and we´re not really a band doing that, but it´s always quite emotional when you do. It´s a strange mix of luck and also hard work and I feel really proud. A lot of people think pride is a sin, but I think that if you´re not proud of what you´ve achieved, you probably haven´t achieved enough.

During these 20 years, what´s the biggest lesson you´ve learned?

To concentrate on the things that are important I would say and that´s music first and foremost. You´ve got to make music that you enjoy playing every night and that means something to you and still says something after 20 years. There´s none of these songs off the first record that we wouldn´t love to play every night. We still love playing those songs. It gets a little bit more tricky when you have more albums out. I think a lot of bands make music early in their career and then they almost disown it at some point. We´ve never done that. We always really cared about what we´re doing and we put a lot of thought into it, so that´s proven to be a great thing all these years down the line. We can listen back to our records and still feel we did a good job and it still feels exciting to us. I think also straddling a line between compromise and also playing the game if you like. Sometimes you have to do some things that aren´t exactly as you´d want. I can think back to the start and supporting some bands that we didn´t particularly like, but we wanted to just steal their audience. It was like “We don´t like their music, but maybe their audience will like ours?” Also, we had to work hard like any marriage, but we´re the same three guys for all of these years and I think that´s really a key to our continuation as a band. I think a lot of bands might have given up when they´ve reached a difficult hurdles on the road. We´ve had our moments and fights, but we´ve always come back together stronger than ever. I think the love we have for each other and that shared connection, sharing that passion and that dream has been something that has kept us together.

Looking back, can you pinpoint a time when you guys felt you were on the right path and really taking off?

Yeah, we made the first three records with Beggars Banquet and they all came out quite quickly, 2002, 2003 and 2004 and we built up a really good cult following playing the UK and starting to venture into Europe and things were building. Then after that we had a little bit of a break since we moved from Beggars to Warner Bros and we were writing the album “Puzzle” (2007). It was a very transformative time in all of our lives personally and professionally. I remember being in New York mixing that record with Andy Wallace, who made all of our favorite records when we were kids and we were like kids in a candy store, like “Fuck, it´s Andy Wallace!” At one point we couldn´t be in the same city when they were recording the strings so we were on the phone listening. We were sitting in a studio in New York at it was at that point when I was just like “Holy shit! This is quite a long way from our dingy little studio in Glasgow.” I suppose from that moment on the way people started to receive the music and the way it felt at shows and maybe getting more airplay on radio, that´s when it really felt like we were starting to reach, and I say this kindly, we started to reach not just the spotty kids who liked shoegazer music, but we started to appeal to a wider audience. It wasn´t through any great effort to change our music. If you listen to that record it´s still quite out there. The way the record starts, you´re not going to say “Pop!” I personally changed from wanting cool people to come to our shows to when I got a little bit older realizing I wasn´t in charge of who would come to our shows or who listened to our songs. That was quite a nice feeling. It was like “These people are coming? Holy shit!” It was a nice feeling.

Your first album was produced by Chris Sheldon and he´s also worked with the Foo Fighters. You´ve played and toured with those guys over the years. Yesterday was the second tribute show for Taylor Hawkins. How do you remember him?

I don´t want to say we were great friends. We toured with them a few times and they were always very kind, but I didn´t have their phone numbers. I´ve got a great memory of joining a tour with them in America and I think Taylor was playing ping pong with somebody and within two minutes he was showing us all the cuts on his hands and the tape and blisters falling off from playing the drums every night and the guys still played fucking table tennis! I was like “You wanna give your hands a break!”, but he was just “I´ll be fine.” He was wearing the board shorts and this sleeveless top and he really just seemed like one of the guys. He seemed so down to earth and so humble and then we got to see him smash those bloody drums every night and knowing he was doing it with his hands falling to bits. That was very inspiring, like “This guy is the real deal.” We saw the concert from Wembley and it was hard to watch, but you couldn´t look away. It was really emotional thinking about what it must be like for the family and I feel for Dave especially, having gone through that with a band member you love so much. It must be so difficult for Dave. Nothing but heartfelt love for those guys. They really looked after us and they taught us a lot. Like everybody else I´m going to miss Taylor.

You played at Milton Keynes with them in 2011, didn´t you? Isn´t that one of those big places you really want to play?

That was the first and only time we´ve played there and yes, I think so. You have Donnington which is famous for Monsters of Rock and Milton Keynes is on a level. It´s got like this natural amphitheater feel and it´s just such a nice place for a gig. You´ve given me and idea now. Maybe we should go back and do a gig of our own or something?

When you started out playing, who were the bands you all had in common? That you all liked?

Absolutely. At that point our musical vocabulary was a little more limited. All the bands we liked, we all liked, whether it was RATM or Nirvana. Maybe at that time Simon (Neil) didn´t like The Beatles as much. We were a little bit more close minded. If somebody didn´t have a guitar on we were a little bit confused, like “Where´s the guitar, man? This is shit!” That´s what brought us together, our love of the same music and consciously or subconsciously trying to emulate our heroes, trying to sound like them, trying to dress like them, wearing our guitars like they wore them. That sort of thing. It´s funny you start off like that and then after a year or so, you don´t want to sound like anybody and you want to sound completely like your own. It´s just funny how you go through that very quick journey of dying to sound like your heroes and then trying to do everything you can to sound anything but them. It´s quite a strange thing. (laughs) But I suppose that speaks of a confidence in a way and a confidence of that you want to do your own thing and take the things you´ve learned form here and there and try to kind of push forward on your own.

I saw you guys at Lollapalooza in Stockholm this past summer and I got exhausted just watching you guys play. What can people expect this Friday?

It´s going to be more of the same, but twice as long. (laughs) I don´t know where the energy comes from. I don´t know if parts of it´s nerves. I think some people like Lady Ga Ga they´re like “Where´s the fucking camera? Where´s the audience? Gimme a microphone, these people need to hear me!” I don´t want to say… reluctant performer, but we´re maybe a bit more introverted than that. I think I would describe us as introverted extroverts. I don´t think that makes any sense, but it´s the best I can come up with. There´s a part of your character that comes out when you´re on stage and a part of our characters are wild and angry and got lots of energy and passion for these songs. The passion for the music is probably what drives that energy and emotion and it always comes back to the songs. I want people to have a good time. There´s a band on stage every week and you can go watch them, but I want you to come watch us and I want to repay with giving you every single energy I´ve got and every little bit of soul. We´re not a party band and you´re not coming to have a party, but you´re coming to have a good fucking time and I want you to go home sore. I want you to wake up and go “Fucking hell! I really know I was at a rock concert last night.” I want your ears to be ringing, I want your neck to be sore. It´s not just a night out. (laughs)