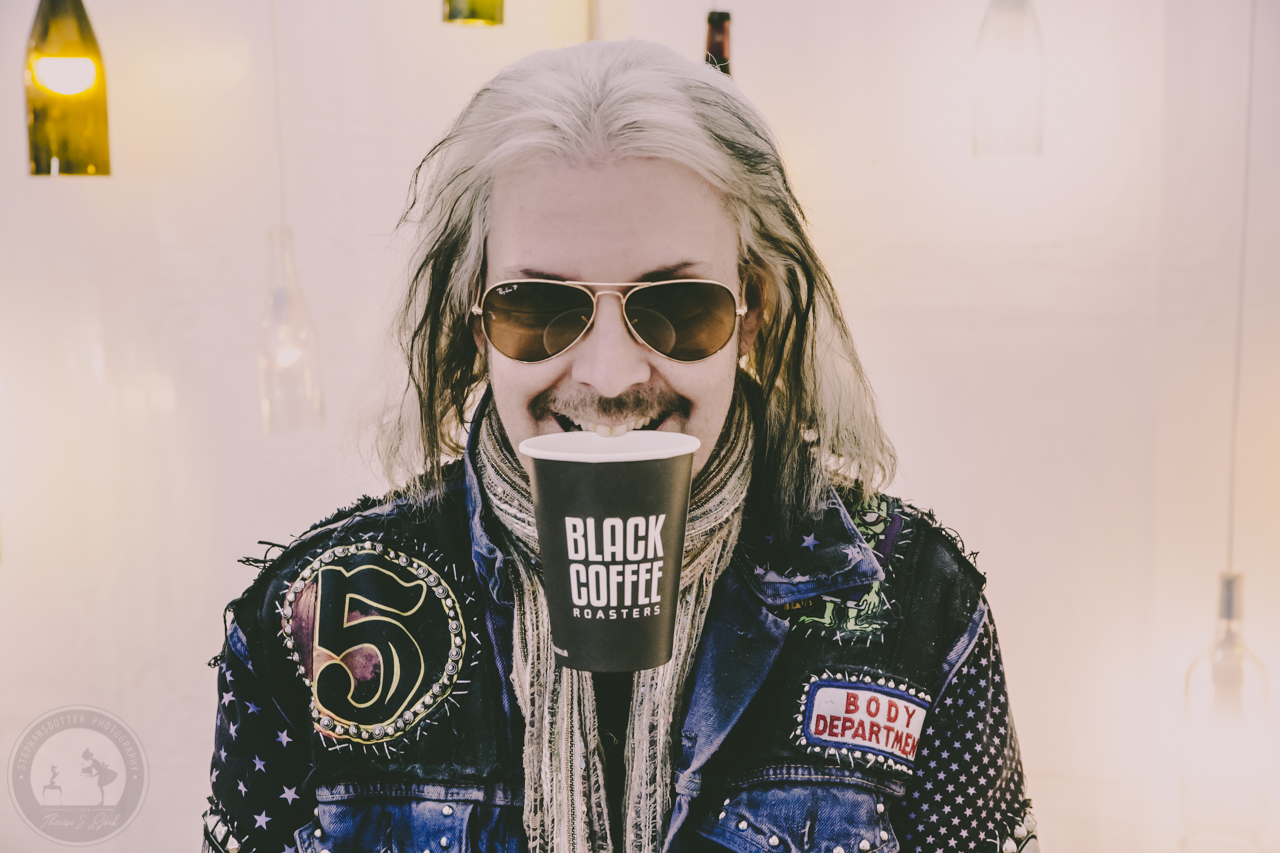 I was waiting all day in downtown Detroit which was very dangerous. I was very young and too young to be in downtown Detroit. I was in the hotel lobby and he walked by and I was like ”I´ve been waiting here all day so I´m not going to let this pass by.”, so I jumped in the elevator with him and his security. He kept his arms crossed and I said ”Mr Simmons, would you please sign this?” and he wouldn´t answer and he just kept his arms crossed. I turned around and I was so pumped and we were just riding up in the elevator in that uncomfortable silence. Then he got out and he said ”Do you want me to sign that for you?” and I can´t believe I said this, but I said ”No, it´s ok.” and I just rode down the elevator alone. You hang out a lot with Nikki Sixx, right? When are you guys going to put a band together?

Well, we did do that ”The Dirt” soundtrack, that song and a couple of other songs for the movie. We work really well together. Actually, we did that Meat Loaf song on ”Bat out of hell III: The monster is loose” (2006) and we also did a Sixx AM track together, which was like number one. It´s weird, everything we´ve done has been a success. I don´t know. We´re always together. If we´re not like riding bikes in the neighborhood, we´ll be at the movies or at the mall. We´re just like two 15 year old kids hanging around doing stupid stuff. Do you know each other from way back?

Yeah! We´ve always been close, but now we´re super close and we get in trouble with our wives.

You´ve recorded this album with David Lee Roth which hasn´t been released yet. Who else is playing on it?

We had Gregg Bissonette (drums), which is cool and we had Brett Tuggle (keyboards) and I did bass on it. It´s really cool stuff. A quick story. When we were recording the record, we went into the studio and he said ”Let´s record all these songs!” and I said ”Great!” So I´m recording the songs, but there´s no click. I´m just recording songs and doing overdubs, which is tough when there´s no click. We did the ”DLR” record like that and that´s how he wants to do it and I was like ”Ok, he´s the boss!” so at the end it was like ”John, great job! THis is wonderful! I´m going to get Gregg in here…”, because I was leaving for the road the next morning and this was early evening. He said ”When you´re gone I´m going to get Gregg and put some drums on this!” and the engineer said ”Well, I think that´s going to be tough Dave, because there´s no click track.” and Dave was like ”What do you mean?” and the engineer said ”Well, there´s no click track so it´s going to be impossible to put drums to it.” Dave said ”John, I´ve never asked you for anything, but I need you to replay everything you just did to a click before you leave!” This is my hero, so I said ”Ok!” and I did the whole record in 8 hours or something. Yeah, he is and he´s super smart and he knows what he wants and he´s got amazing memory. He´s funny. And he sang incredible. Hopefully one day it will see the light of day. I´m really excited because I´m such a big Van Halen fan too. I want him to, but he´s doing the Van Halen thing too. I love them and they´ve been such a huge part of my life and I´m very close to Mike (Anthony) too and he just played with me at the Whisky and we did ”Take your whisky home”

I interviewed Corey Taylor (Slipknot) recently and we talked about that and it was one of his starstruck moments, because he had never played with him before.

I´ve played with him before… (laughs) A little inside story was when we were backstage with Mike and Corey was warming up, after we did ”Take your whisky home” we started playing ”You really got me” and he was like ”Oh my god! Let´s do that one too!” and then we did ”Runnin´with the devil” and he was like ”Let´s do that too!” and we just started doing all these songs. You can see a clip on YouTube where Corey or Mike or somebody steps in and goes ”Should we do this!” and it was like ”Yeah, I guess.” It was such magic and Mike texted me and he goes ”This was something special!” and it really was. I have such a respect for Van Halen and so does Corey and Fred Coury (ex Cinderella) and it was really magical.

You should hook up with Mike and do something with him?

But then I´ve got Nikki too… (laughs) The new Rob Zombie album then? Is there a date?

I´m not sure of a date, but the record kicks ass. Great songs on the record. If you love Rob Zombie or if you love White Zombie it´s the perfect record for you. You know what´s strange? Rob´s voice has not changed at all and it´s the weirdest thing. He sings every night and he sings hard, but his voice does not change and we still do ”Thunder kiss ´65” so when you here the new record… if someone mashed up a bunch of Rob Zombie, and White Zombie too, you would never know what is what because his voice is the same and that´s what I love. I´m really proud of it.

Is it mainly you and Rob writing songs?

What we usually do is that we get together and we work on music, but this time he was really far away from me and I went to his house and he had the vocals, the melodies already done and he had very basic music, so I was coming up with music around the vocals, the melody and the lyrics and it was amazing. It was the best, because with everything he was like ”I like it! I like that!” because nothing was getting in the way of his vocals. It was such a cool thing, so this record is heavy, dude! It´s heavy, heavy, heavy. I can´t wait.

You´re a major KISS fan. What is it about KISS and what got you into them when you were a kid? Was it just the makeup?

It´s nostalgia. I was walking in Sears and I saw when ”Love gun” (1977) first came out, I saw the display and it was just shocking. I got the record and I´ve been a complete fan ever since. I have an Instagram called ”Knights In Satan´s Service”, so every day I put up a piece of merchandise and it´s been going every day for almost two years. Think about that! It´s a lot of stuff and people love it. I´m not doing it just to say ”Look at my stuff!”, I´m educating people, like ”Here´s a Japanese songbook and it came out in 1977!” or ”Here´s a ruler from the Aucoin offices!” Things like that.

What is your most precious KISS item?

I have Ace´s cape from the ”Dynasty/Unmasked” period and then I have Ace´s belt from when they first started and they were playing The Daisy and The Coventry, that his mom made. Things like that. Are you getting the ”Magic – KISS Kronicles 1973-1983” (Ros Radley) book and the new one about KISS merchandise?

Yes and I have a lot of my stuff in the book ”The hottest brand in the land” and my friend Nicholas (Buckland) who runs Everythingkiss.com got it to be an official KISS book and I´m so happy for him. It´s just great and I´m really proud of him.

Was ”Love gun” the first record that really had an impact on you?

Yes. That was the first record and that was it for me. Collecting and doing all this stuff is such a great hobby and it´s nostalgia and it´s a great feeling. I don´t see anything wrong with having a hobby like that.

And your wife is ok with all this?

She´s not. (laughs) When the guys come over, like Ace and Peter, I go ”Don´t go into that room! The cats are in there.” I seriously say that because I don´t want them to be like ”What the hell is wrong with you?” True story. When was the first time you got starstruck, meeting someone that was an idol for you?

I did meet Gene Simmons when I was very, very young. I was waiting all day in downtown Detroit which was very dangerous. I was very young and too young to be in downtown Detroit. I was in the hotel lobby and he walked by and I was like ”I´ve been waiting here all day so I´m not going to let this pass by.”, so I jumped in the elevator with him and his security. He kept his arms crossed and I said ”Mr Simmons, would you please sign this?” and he wouldn´t answer and he just kept his arms crossed. I turned around and I was so pumped and we were just riding up in the elevator in that uncomfortable silence. Then he got out and he said ”Do you want me to sign that for you?” and I can´t believe I said this, but I said ”No, it´s ok.” and I just rode down the elevator alone. True story. Are there any young, up and coming guitar players you´re keeping track of? Do you have any other projects going on?

I have my instrumental record coming out July 31 and I´ve been making videos for it, animation videos and there´s this video called ”Zoinks” and the guy from ”Frozen” is the guy that animates it and I´ve been making videos for my record, because I think that´s such a great way to get things out there. It´s like your own TV channel. So the record is coming out July 31 and I´m touring to support it and we´re thinking about coming here in November and these shows are fun to play.