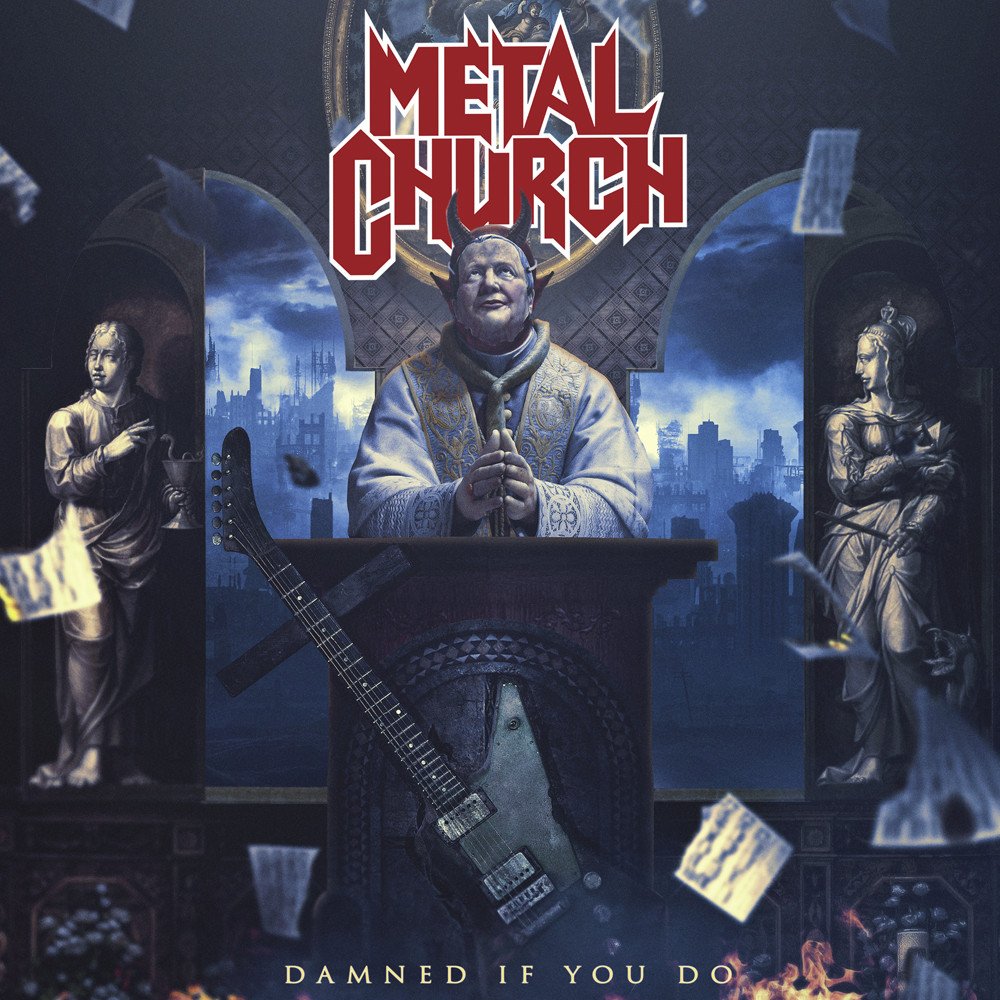 Let´s go through a couple of tracks on the album and you tell me about them. First off is the title track ”Damned if you do”

That song and the album title comes from the whole notion of the environment we´re living in these days currently, politically and socially, with all the fake news and the lying and deception going on. You have to be extremely careful about who you listen to and what you believe. The cover has to do with that same concept put into a spiritual aspect. Just because you´re sitting in a church does not necesarilly mean you´re hearing the truth and that the devil´s biggest lie is that he doesn´t exist. From that aspect that´s what the cover is kind of about. The song itself is about the whole concept of being very careful, because if you´re not careful about what you listen to or believe, unfortunately you have to spend the time to research what you hear… You´re damned if you do and damned if you don´t, that´s kind of loosely what the song is about. These are interesting times. Just watching the news must give you material for a whole album?

Tell me about ”Revolution underway”! Sometimes you get the feeling that there might be a revolution on its way.

Absolutely. Look at France right now and Germany and England. Especially over in Europe right now and it´s happening here too. That´s what that is about. It´s about people waking up. The sooner the better.

You know, to be really perfectly honest, I´m not really sure that that song has a whole lot of meaning. (laughs) I think it´s one of those songs that just is what it is. I think that´s just a heavy metal song. That´s what that song means. It means hevay metal. (laughs)

Looking at your career and you´re getting older, when it comes to writing songs, is it still kind of the same as when you started out or has it changed a lot?

Well, one thing I have done intentionally is expanded creatively and I can´t just do one thing. The way I approach heavy metal is pretty much the same, but as far as trying other things, I´m defintely trying other things and trying to create things. That´s why I have the band Presto Ballet, which is my 70´s prog rock outlet. I love that stuff, but I wouldn´t want to interject all my stuff I like to try and experiment with into Metal Church, because I don´t really want to redefine anything. I´ve never been one to do that. I´ve never been one to expand the definition of heavy metal. That seems to me, a lot of times, to waste you fans money. If I want to try different stuff I´ll create a different project. As far as approaching the writing and everything for Metal Church, maybe the only thing that´s changed is the technical aspects of it, the hardware of it. One thing I love about the digital age is the process of the editing and cut and paste and it´s amazing for making demos. For making the actual record and all that, I´m not a fan and that´s why this new album sounds the way it does. I wanted it to not sound like modern records because, other than maybe the singer, most heavy metal albums sound exactly the same. Same guitar sound, same drum sound, same mix, same everything and I just hate that. In that aspect that has not changed.

The way technology evolves is interesting. With pop music these days, everything is autotuned and every single voice sounds the same, which is just really weird.

Yeah! It´s not right and it´s not rock and roll. Rock and roll, in whatever form, whether it´s metal or country rock or whatever, it´s a human expression and it´s not supposed to be perfect. When it´s perfect it loses the soul. When I listen to records now, everythings right on the point and drums don´t have any groove and the songs don´t have any feel. The drummer is pretty much useless and they´re making a drummer be a freaking drum machine. That´s not right. What´s the point if you´re going to take a drum track and have them play and then beat detect to make sure everything´s perfect? Why don´t you just freaking program it then? There´s no point. The whole point of having a drummer and having your own drummer, is that drummers, good ones, have a feel and a push and a pull. Can you imagine Led Zeppelin putting out a record now? John Bonham, one of the greatest drummers ever, he has a feel. You put ”Kashmir” on and beat detect that and program that… that would suck! (laughs) And just missing the whole point. So many young kids are growing up with this and they´re not learning to play correctly. That´s why there´s not any really good new bands. There´s a few, but not as many as when we were kids. There were tons of good bands when we were kids! Now there´s three.  (laughs) What do you think of a band like Greta Van Fleet?

I think it´s wonderful. Of course they sound so much like Led Zeppelin and people get kind of, you know… the plagiarism is a factor, but then at the same time I´m like ”Well, at least they´re playing and at least they have the right influences and they´re being a rock band, they look like a rock band and they´re doing something. They´re young and obviously they´ve gotten into their parents record collection and listened to it and figured it out.” If you give the kids a chance they will figure it out, because there´s a generation of kids that are out there going ”Where´s our swaggering rock star guys? We don´t want to listen to Eminem complain about Trump. Where´s our cool rock stars?” They don´t have them so they have to beat them and figure it out for themselves, and they are. There´s a new band, they´re not kids, but Blackberry Smoke, who play southern rock. They´re fucking killer! People say the music business is so competitive and it´s like, ”Well no, it´s not really competitive, it´s just crowded.”

(laughs) Exactly! ”Hey, they´re influenced by real bands! Hey kids, go! Go! Do it, do it!” The fact that they´re getting as popular as they are, is a good sign that if people actually do it… If you build it, they will come. It´s obvious, it´s organic. Even in this day and age and even when it sounds old and they think ”This isn´t hip and this isn´t cool and…” Rock and roll is rock and roll and people like rock and roll because of what it means and what it´s supposed to be.

Another cool song on the album is ”Monkey finger”

(laughs) Oh, good! I´m glad you like it. It´s a hard rock song and it´s nothing more, nothing less. We wanted to put something on the album that kind of was a little bit of a break, a little more simple, a little more catchy and more like Accept and old Judas Priest and all that kind of stuff and it was very intentional. We had some resistance from the record company about that. We didn´t want a one dimensional record, a record that is just thrash all the way through. We´re not that band. If you want that, go listen to somebody else. That´s not who we are. It´s extremely important that that song made in onto the record and we stood up for that.

The final song I want to mention is ”War electric”

That´s kind of about the technology factor and again, getting into the whole digital aspect and fighting and trying to fight balance in the world. Not only with audio stuff but the factor that everything is getting so fake and everything is so controlled. It´s about trying to find balance in all of this stuff right now. It can be a little overwhelming at times.

What do you feel Stet (Howland, drummer) brought to the album?

Where do you see the band 10 years from now? Do you see Metal Church still being out there?

You know, absolutely! In one capacity or another. A lot of people still show up and if people still want to se eus, if all the old guys that are fans want to come see us old guys playing, then I´m there. I hope to be doing other things as well musically, but I´m not going to stop. I don´t want to retire. People have asked me before ”What are you going to do when you retire?” I think about it and think about it and then suddenly it dawned on me – who the fuck wants to retire? People retire from their jobs to do what I do, so I´m really, really lucky that I get to do this and I´ll always be doing it in one capacity or another. We still get to do it and that´s one good thing about the advent of the internet, is that it´s allowed us to downsize. The streaming services have to start paying for the product that they´re selling which is a complete rip off, but it looks like there´s legislation that´s going to start make that happen. The up side outweighs the bad side. The up side is that that whole major label filter is gone and it´s pretty much direct artist to fans now, so in other words, if we still can be in our 70´s and if our fans are still in their 70´s and still want to hear what we´re doing, we can sell records. There´s no expiration date anymore. What advice would you give your younger self if you got the chance?

The advice I would give myself would definitely be to pay much closer attention to business. Pay much closer attention to contracts and pay much more attention to who you hire as manager. Pay attention to that, because back in the day the record companies would take advantage of the kids. ”We´re going to sign them up for everything and we´re going to advance them money.” Understand the idea of recoup. They would throw a couple of hundred thousand dollars at a band, give them everything they wanted. ”Give them cash, get them on the road, get them beer and chicks and get them on the road and keep playing.” and then ”Ok, we´re done with them!” and you´ve got nothing left. For example, when ”The Dark” (1986) came out, we toured the world with Metallica and kicked ass and then we got home, had a couple of bucks and ended up having to get a day job. I´m not alone in that. That´s just the way the business worked. Unless you were Metallica at the time, you had nothing.