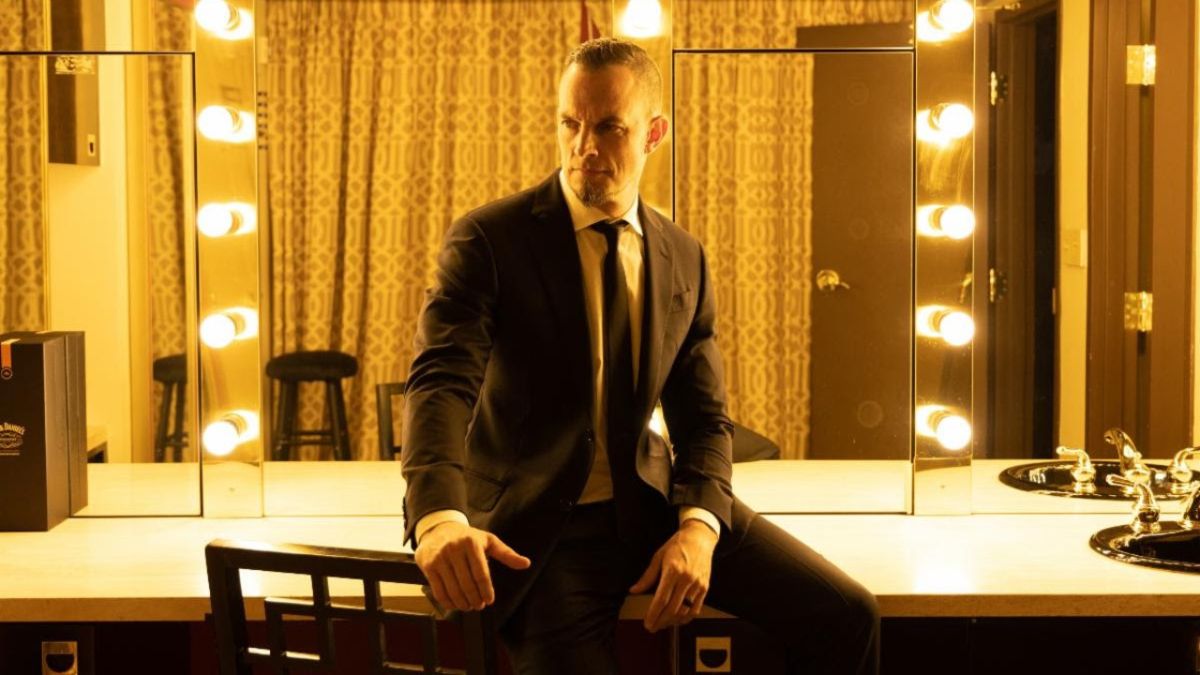 – She makes me smile more than anything in the world.

With your daughter Stella having Down´s Syndrome, has that in any way changed your look at life, so to speak?

One hundred percent. It´s made me, my wife, my kids and all my friends stronger and it has given us all purpose. She´s really brought everybody together. It makes other things in life seem trivial. Now that she´s here, I´ve got a new purpose and new goals. She´s always right here next to me. (shows a big picture of Stella) You can see pictures over there too. (points to another big picture in the background) I just have her all over the place. She inspires me.

When you found out that she had Down´s Syndrome, what were your initial thoughts that went through your mind?

I was scared. I was worried about many things. I got really quiet for about three or four days. My wife would say “Are you ok?” She grew up with a cousin with Down´s Syndrome, so she was the rock through this whole thing and she said “This is going to be ok. She´s going to be great.” I was worried for three or four days and then I just snapped out of it and did everything I could to prepare for her. I spent a month in her nursery painting a big mural. No we just obsess about our daughter and she´s just everything to us. She makes me smile more than anything in the world. I wish the present me could go back to that scared me and be like “You´re going to be happy as can be when she´s born, so don´t worry about a thing.”

It´s fascinating how things that happen can change you for the better and your approach to things in life, as you mentioned.

Absolutely! Doing this project (Mark Tremonti sings Frank Sinatra) has really brought such huge amount of support from everybody around me. She´s our little celebrity now. Everybody knows Stella and she´s got her own Instagram account and I don´t know how many thousands of followers she´s got now. Everybody just loves her and she puts a smile on everybody´s face. She´s got a big purpose.

Why Frank Sinatra, which is quite different from the stuff you´ve done with Creed, Alter Bridge and your solo band Tremonti? When did the idea for this come?

It was about three years ago. I´ve always been a fan of Sinatra and I loved singing along to his Christmas songs and his songs in general. It just fit my vocal range. About three years ago I went down the rabbit hole online and I found a couple of tracks that really blew my mind, some older stuff. I saw a clip from 1943 when he did a performance of “The songs is you” and he seems like this shy kid and then as soon as he opens his mouth to sing it´s like “Wow, that´s Frank Sinatra! That´s the guy who was the world´s first mega pop star.” I said “I wanna sing just like that. I wanna replicate what he´s doing.”, just like I did on the guitar when I was learning the guitar. I obsessed about it and I bought all these books about him and I watched all his movies. I bough the book “Tips on popular singing” (1941) that he wrote with his vocal teacher (John Quinlan). I did the deep dive and I started getting the hang of it and I didn´t know what I was gonna do with it other than just have fun, until my daughter was diagnosed with Down´s Syndrome when she was in the womb. I said “You know what? There´s a reason for my obsession. I´m gonna do this record, I´m gonna do it for charity and I´m gonna raise mone for Down´s Syndrome. It´s my new purpose and I´m gonna launch it with this Sinatra record.”

I grew up listening to Frank Sinatra since my parents like him. Was Sinatra someone you grew up with as well?

I think, whether you like it or not, here in the States you´re around Sinatra all the time. He was everywhere. He was on TV… you can´t get away from him. At Christmas time he´s all over the place. Like it or not, you´re familiar with Sinatra since you´re a baby. It´s my happy place. When I hear Sinatra´s music and when I hear him singing, it just puts me in a good mood. He´s also got some sad, moody stuff as well, but I just love his voice and I´m so happy to be able to do this project. It blew my mind that it worked out the way it did and get to record with his band and getting his producer (Hank Cattaneo) from the “Duets” (1993) to hear this stuff and to enjoy it and getting the approvals from the Sinatra family. It was all a big mindblowing process for me.

When I first heard you sing the first couple of words in “I´ve got you under my skin”, my first thought was that you really do sound like him.

Thank you very much! I practiced singing these songs more than anything I´ve ever done musically. During Covid my son had soccer practice four or five days a week and sometimes three hours a day and you weren´t allowed to get out of your car, so I was sitting in my car… 45 minutes while driving to soccer practice I would be singing along to Frank Sinatra, three hours I would be studying a particular song over and over and then for a 45 minute drive home my poor son had to hear me singing it constantly. That was a year and a half of me doing it that was during soccer practice, so I had plenty of time to really dive in. Every day started the same. I´d sing a couple of songs and be like “Nah, it´s not as good today.” But then by the end of the day I´d be like “I´ve got it!” I would go through this process and see the effect of all the time put in.

Were any of the songs a bigger challenge than the others?

Oh yeah, there were a lot of challenges! The first big challenge was ”Nancy (with the laughing face)” If you hear that song there´s a lot of tempo shifts and there´s a lot of space. That´s one thing that Sinatra was an expert on. If you listen to “Send in the clowns”, I love that song, but I didn´t even dare do it on this record because there´s so much space. It´s almost like the band around him were experts on watching breathe and watching him sing and come in whenever he wanted to. The song “Nancy” has a ton of space and you have to really know your phrasing on that song to get it down. It was very tough. A song like “My way”, because it´s so popular, I didn´t wanna do it the same way that Sinatra did it. I wanted to put my own spin on it, so we just kinda improvised in the studio. I think it turned out special because it´s so different. The toughest song to sing has got to be “Wave” I remember reading a book on how Frank Sinatra loved using his lower register. He loved to sing deep. A lot of singers hit these high notes, but back in the day a lot of the singers sang lower like Bing Crosby, Al Jolson, Frank Sinatra… all these guys were singing with big, deep, baritone voices. They said that the lowest he sang was on the song “Wave”, so I did the deep dive and I actually love that song. I picture Sean Connery on the beach drinking a martini while that song is playing. It´s such a cool tune so I had to tackle it.

Will you be performing these songs live in any way?

Yes, May 14 here in Orlando we´ve booked a show. It sold out and now I´ve got friends calling me “Hey, can you get me in?” and I go “I can´t get you in.” I had a personal guestlist of 30 and then it got up to 60 my manager´s like “No more people can come in.” We just have this one show booked, but we´re planning to put somethings together after this Tremonti tour some time in the summer. We´ve even discussed after our Alter Bridge European tour this winter, maybe getting over there and doing some Sinatra shows.

Will there be more stuff like this in the future?

Yes. The charity is called “Take a chance on charity” and that is me challenging everybody else with a platform to sing a song, paint a painting, do magic show… whatever you wanna do to raise money for charity. So far I´ve got a lot of friends who´ve stepped up to the plate and start doing this project. It won´t come out until after this Sinatra record, but we´re working on it. The guys from Black Stone Cherry wanna do project, my great friend Larry the Cable guy wants to do a project, Chris Daughtry who I just toured with wants to do a project, I´ve got the country band Lone Star, I´ve got Steve Stevens… I wanna raise $100 million by the time I´m a little old man. Not with this Sinatra record but with the whole “Take a chance for charity” project.

You´ve got the old Sinatra musicians on the record. How did you go about getting them involved?

My manager Tim, his childhood guitar teacher was Dan McIntyre who toured with Frank. When I told Tim I wanted to do this project, he was like “You know he was my teacher, right?” He had a lunch with Mike Smith who was Sinatra´s band leader and Dan. They went and they talked about it and they said “Can your boy sing?” (laughs) and my manager, who believes in me, had never heard me sing Sinatra but went “Of course he can!” I got on the phone and sent him a voice memo of me doing “They call you lady Luck…” just to ease his mind and after we did our first session, all these guys would come up and be like “Hey, I didn´t know how this was gonna go, but this is great!” To getting approvals from all these guys was huge for me.

The way you sing on this album, do you think it´ll be something you´ll carry with you to Alter Bridge and Tremonti? Did you learn something about your voice doing this?

Yeah, it really helps me be comfortable with my lower register. As a rock and roll singer, I think a lot of us like to push our voice and sound different than we actually sound. On this last Tremonti record “Marching in time” (2021) if you listen to the bridge in that song, I sing low in that Sinatra style range and that´s just one little glimpse of me using that range. A lot of the stuff I write is always screaming and it would be nice to be able to write a ballad or something that has a lower range.

What´s the status on Alter Bridge?

Drums are done and bass is starting today (April 19). I go in next week. We all went in to do preproduction. Myles and I write demos and then one by one we´ll go through the demos until we´re satisfied with the record. We arranged 14 songs and then the producer´s like “Hey, here´s the moment of truth. We have to cut two of them.” That´s the worst thing, so me and Myles were like “We´ll both cut one of the songs that we brought.”

And the European tour?

It´s starting in October. The album should come out in September.