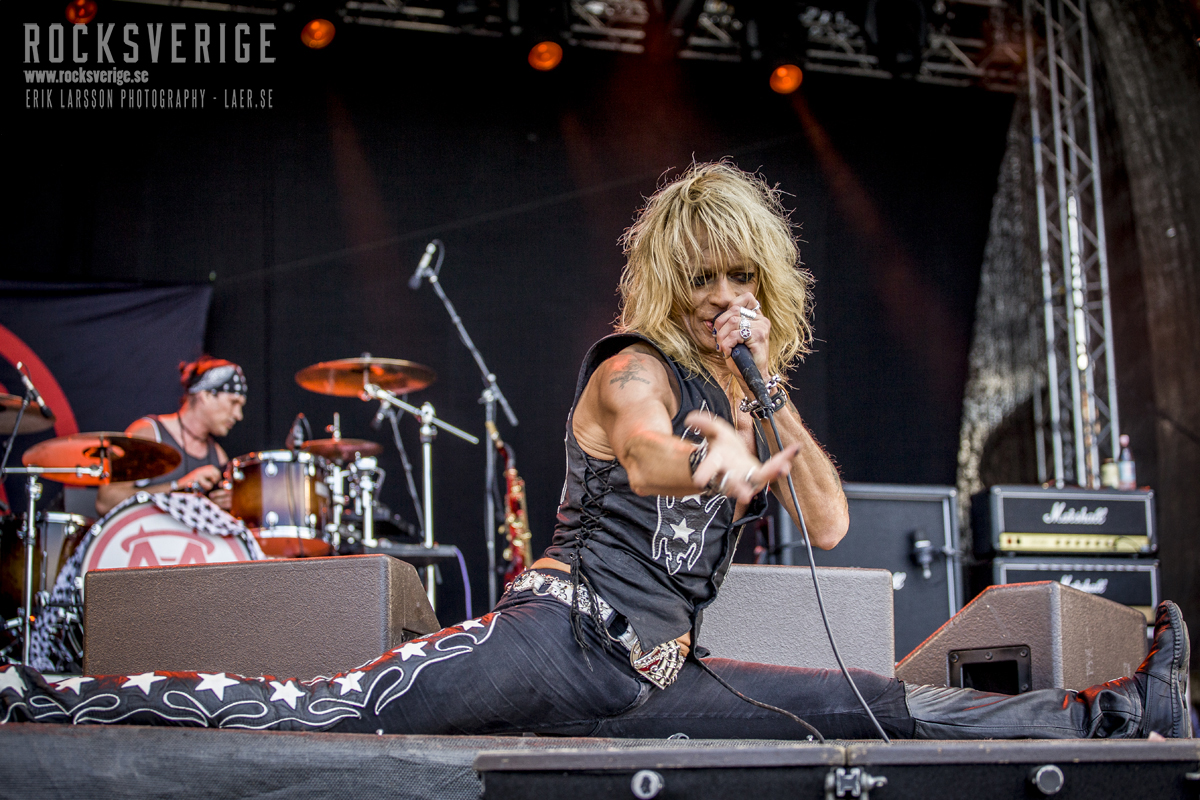 I like to think so. I try to improve all the time and I think I do improve. After every show I think “I could´ve done this better, I could´ve done that better.” and I´ll try to improve. You´re never good enough and you always have room for improvement which keeps things interesting. I´m always hungry and I always want to do better. Most people say that the last four albums, including the new one, are the best records I´ve done in my career and I tend to agree. It´s a nice position to be in, to be able to create and the new stuff you create is the best work you´ve done in your career as opposed to some bands that have one big hit in the 80´s and they make records only as an excuse to go on tour and they maybe play one song off of the album, if even that. I´d rather not be that kind of artist. I´d rather be me being in this position.

You´re in incredible shape. In way better shape than I am. Do you work out a lot?

Not that much. I do exercise when I´m at home. I go to gyms or I run and do stuff like that. Swimming is my favorite exercise, but I don´t have a pool. If I had a pool I would swim every day. The best exercise id actually performing on stage. You´ve got to show everybody and you become like a Superman. I stay in shape in order to do what I do and it forces me to stay in shape. The older you get the more you have to work at it. My lower back hurts and I had to start doing these inner stomach muscle exercises to support the back. I saw a couple of physio therapists and they advised me on that. I did certain exercises for two or three months and I started feeling ok. I´ve still got  a few years left.

About the new album then? The Mexican trumpets in “Heaven is a free state”, where did they come from?

It was my idea. I wrote that song myself entirely and I had the saxophone doing those parts on the demo, but in the studio I had the idea and said “Let´s go all the way with the mariachi!” and I had this Finnish trumpet player, well respected in jazz circles and he came into the studio and played the trumpet and I just felt “This is great!” Sami Yaffa always loved that and Steve Conte said “What is this? Hava nagila?” That song is great for an earbreak from the hard rocking stuff. The album has a lot of variety and dynamics, so hearing something like that is a different world of music as opposed to a slow, sloppy ballad or something like that. It´s a great way to keep the album interesting. (Mike holds up both feet and the socks say “Nobody´s perfect, but I´m pretty close.”)

Yeah! No, it´s not. It was a coincidence. It was only afterwards that I went “Wait a minute! The song´s called Wasted years.” It wasn´t planned. It just happened to be the song he played on. That´s the Hanoi connection. And usually things happen like that. I never plan anything in my life. Tell me the story about about Prince back in 1983! Hanoi Rocks wanted him to produce what would become “Back to Mystery city” What lead you to Prince?

Well, the “1999” (1982) album. I heard that and thought “Wow, this is something else! This is something new and a new sound and this guy could be great to produce us.” He obviously was like a one man band. We wanted to go for anything that was different and new and that would have been an interesting collaboration for sure, but he answered “I don´t produce no white boys!” But girls were ok, I guess.

How did you get in touch with him?

Our manager Zeppo got in touch with his management and that was his reply. That´s the way it was.

And then you ended up with the Mott the Hoople guys instead?

Yeah, we actually wanted Ian Hunter, but he turned us down so the next best thing was Dale “Buffin” Griffin and Pete “Overend” Watts. We had a great time with them and the album was good, but Ian Hunter told me later “Those two couldn´t get arrested as producers.” (laughs) Instead, Ian came to write some lyrics on the “Two steps from the move” album on “I can´t get it”, “Underwater world” and “Boulevard of broken dreams” A guy like Prince, has he in any way influenced you?

Of course. I´m sure he´s influenced everybody one way or another, but he influenced me for sure. The “1999” album was great and I loved it and I went to see the “Purple rain” movie. Some say it´s corny, but I thought it was a great movie and I loved it. I was in tears towards the end of it, but Prince also copied Little Richard. Little Richard did an interview where he said “Prince, baby I love you, but I had a purple Cadillac before you was born!” And there´s a photo of Prince looking into a mirror and he´s a cross between Little Richard and Jimi Hendrix. Prince took it to a new level, but that´s all I know about Prince really. I got a session payment for playing the saxophone and harmonica on “Bad obsession” The song “Ain´t it fun” came about when Axl had told me that he had not heard The Dead Boys. I made him a tape of The Dead Boys´ first two albums and then I gave him a tape when we were in Hollywood. We were listening to the tape in his car and when the song “Ain´t it fun” came on, he went “Wow! Wait a minute, I recognize this song! We´ve got do this as a duet. We´re doing a compilation album of cover songs next.” He called Slash and said “Put the band together! We´re doing this song.” We did it as a duet and I said “Could it say on the record, In memory of Stiv Bators (1949-1990)? and he said “Of course!” That was the first single of the album and it was a magical take and Stiv was definitely there in spirit. But my point was that I never wanted any money. It was a scumbag manager I had anyway, so I didn´t want to touch it. I didn´t want them guys to change their minds about the song, so all I asked for what to have on the record, “In memory of Stiv Bators.”, and to spell my name right. That was all I wanted. I had heard through the grapevine that some of the old band members had gotten greedy and claimed that they wrote some of the songs that they hadn´t really written.

Is touring as much fun now as it was when you were younger?

Yes and no. The time on stage makes up for it. The travelling is more difficult no with the security and check ins and stuff. I mean, better safe than sorry… When I have time off I usually like to stay home with my wife and my two cats and not do anything, because of my work I have to travel so much anyway, so I prefer not to travel as much in my spare time. Playing shows? Better than ever! This band, these guys… if I could choose any people, live or dead, I would choose these guys to be in my band. Seriously. That´s the truth. We have such a great time and such a great vibe.

That has to be a big part of it, the chemistry?

Yeah, it has to be right. I refuse to have anybody in the band… it takes one guy to ruin the whole vibe and it´s unacceptable. At this point I´ve decided that I´ll never work with an asshole again. I don´t care how good or how great… it´s not worth it. What would you say is your favorite record of all time?

The Rolling Stones “It´s only rock and roll” (1974) That´s the first time I´ve ever said that. Or Little Feat´s “Sailin´ shoes” (1972). That´s the one! The second song, “Cold cold cold”, I use it as a reference for drum sound. That piece is bigger than Bonham. They tuned the drums really low, big and heavy, just the way it´s supposed to be. Then you have Roger Taylor from Queen and his toms and the way he loosens up his hi hat. His son Rufus is in The Darkness. He said that “My dad tells me to loosen the hi hat too.” and I said “Yeah, you should do that.” (laughs)