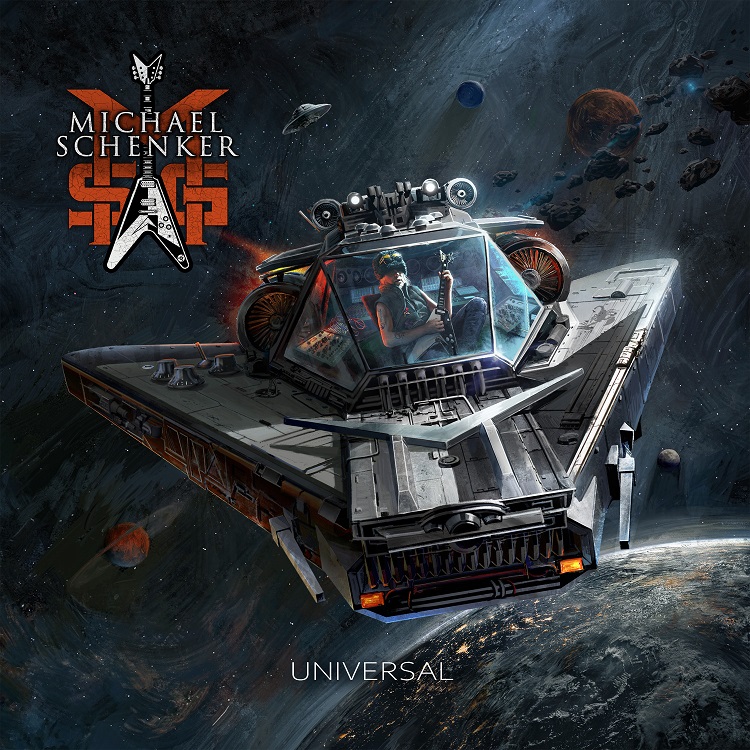 – I took pictures of myself as the bass player, the drummer and the guitar player. Even my brother (Rudolf) thought it was three different people. He said “Wow, the drummer is good looking!” and the drummer was me dressed like a woman.

How often do you go back to Sarstedt, the place where you grew up?

Last time I went there, which was the only time for many, many years, was to get a birth certificate about seven years ago. Wait, when my mother was still alive I would go there often actually. I visited her many times, but she died in ´95 and I haven´t been back.

You´ve done so much throughout your career. Not counting the new album, which album means more to you than others?

Not really, because for me it´s really like a book, like a life story, the whole development from beginning to end. A story that shows the changes that I needed to express, which was the reason why I didn´t join Ozzy Osbourne or went with UFO. All of these things I needed to do and which I did, were important to do and that´s why every chapter or year of my life in my life are all equally important.

Do you feel that you learn new things when it comes to playing?

Well, if you do what I do, which is playing and discovering and having fun, if you approach it that way then yes. I discover and play within myself so I don´t go by something that is laid out in front of me. I just kind of invent something or put things together that boil inside of me and I pick notes and put them together the way I feel like. Self-expression is my passion and I play and discover like new chemical reactions based on the notes I put together. I make discoveries and my fretboard is getting bigger. Obviously over the years it´s become much bigger than it used to be in the beginning.

Do you play guitar every day?

I discovered that it´s good to kind of make it a routine to play a bit every day. I have watched other people falling apart, like maybe not playing for two weeks and then pick it up after two weeks, but the problem is that if you take a break, you snooze you lose. If you don´t use it, you lose it. It´s that kind of a thing. When you get older it´s also more important to keep it… it´s like stretching… If you play football, you wanna stay in shape. People who exercise excellence have to do something for it. It doesn´t come from nowhere. If you´re a student and you want to get the grades or if you´re a painter… I´m an artist and I know what I need to do and I know that if I let my ligament go to sleep, they might never wake up again.

Have you ever experienced pain in your hands or things like that?

For some reason my hands have been left alone, but I experience it in joints in other parts of my body. I guess that if I keep moving them on a regular basis it helps. I´m not crazy about it, I just think that an hour a day is as important as saying some prayers in the morning or meditation or some people stretch and do exercises. Whatever people think is important for them, they spend some time on it. If we don´t wanna lose it, we have to involve it in our daily activities.

Do you think you´ll be playing until your last breath or do you look at it like there might come a day when you see yourself retiring from the music business?

I don´t pretend to be a fortune teller, so I just leave it up to the creator of all creations. Today is now and that´s the day I´m living. The past is gone and I can´t tell you if I´ll play until my last breath, but I´m having fun playing so I wanna play until I can´t anymore and I have no clue when that will be. If it´s down to joints and how my muscles and ligaments work, I have no control over that.

Is it as much fun today as it was when you started out and became Michael Schenker the guitar player?

If you asked that question to a commercial entertainer, they would probably not tell you the truth, but I cannot see that once you have made all the money and you play the bigger places and that was the whole reason for being there, that it would be as exciting today. I doubt it. For me as an artist, it gets better all the time, because the discoveries that are coming form within myself are not available externally. They are only within me. When I play and discover something, it´s exciting. Can you imagine every time you find a piece of gold? It´s exciting!

I read that with the “Thank you” album that you released in 1993, you travelled around the US by yourself promoting the album and from that you got three houses and a piece of land in Hawaii. Is that true?

(laughs) Yeah and it all started with a limo driver telling me “Michael, do you know you´re getting ripped off left and right?” and I said “No. I´m aware of some things, but I´m happy I have a roof over my head etc.” When I left the limo driver, which was just after I had split with Robin McCauley and I said to myself “If I get ripped off left and right, maybe I can just make an album all by myself and sell at least three albums a day for a few sandwiches and a roof over my head and something to wear?” It was a humble request, and a light went on. I went like “Wow, I would be totally independent and no more rip offs!” I made that instrumental album called “Thank you”, saying “thank you” to all my fans for supporting me over the years. I went on a Greyhound bus with a guitar case and a food case and went 10000 miles through all of the US knocking on radio stations´ doors without appointments and 80% opened up. When I came home my whole garage was full of envelopes full of money. All the money that went into other people´s pockets before… I never got paid for live concerts until 1991. I played for all these years putting money in other people´s pockets. The humble request of a few sandwiches… like you said, I had land in Hawaii, I had my recording studio in Arizona and a house in Mexico etc and that was the proof from that little experiment. It showed me what really happens.

I would think that anyone else would just lawyer up and sue people left and right. What made you travel by yourself across the US?

Do you still own that piece of land in Hawaii?

No, no, no! On top of that comes the opposite. Then I married a woman in America and then I lost it all. (laughs)

The new album then. Where did the title “Universal” come from?

I already had the album cover, which I designed a few years ago and it wasn´t the right time. I designed it at the time when William Shatner from Star Trek was talking on my album. I had a sketch of a spaceship going through the universe and when I was doing this album I remembered that and I showed it to Nuclear Blast and they looked at it and converted it into what it is now. If you see the album cover, of course the universe speaks to you automatically and Nuclear Blast said to call it “Universal” For me it means no borders and I can go from planet to planet, everybody understands the music. There´s a UFO behind me on the cover and I can go on a planet tour and go from planet to planet instead of city to city. I was probably picked up by a UFO while I was travelling around in the beginning when I was a universal child and I ended up on planet Earth with UFO.

Do you believe in UFOs and such things?

Look, there´s so much more than meets the eye. Anything is possible. I believe there´s nothing impossible.

Have you ever seen something you couldn´t explain?

A few visions, but that´s more on a spiritual level.

Are you a spiritual person? Do you have beliefs?

We´re all spiritual because we have body, mind and soul. I believe that there is something bigger than me for sure. There is definitely a great creator of all creations. There has to be something.

When you´re writing an album like this one, do the songs just appear one after the other or how does it usually work?

I stretches throughout the year, throughout the time when I´m not recording anything. I play and discover bits and pieces. These are my pieces of gold and I put them away and when it´s time to make a record, I pick one of them and I get inspired by it and connect other ideas with it. It´s really simple. I don´t get writer´s block. It´s like a kaleidoscope, it´s never ending. There´s always another combination I can put together. Another combination of tones or ways of doing things.

Do you play any other instruments besides the guitar?

I have a big interest in drums, but I haven´t played drums forever. I discovered John Bonham by myself and he was the best drummer ever. I have a sense of rhythm and I have a sense of drumming. I love drumming instead of dancing. I hate dancing. It´s something I really enjoy. I did it for years. I would just always drum somewhere, on a table or on my legs. I made a record where I was drumming. I did everything by myself and it´s called “The odd trio” I engineered everything, I recorded everything, I played everything and I actually gave myself four different names including the producer. It was all me and then I took pictures of myself as the bass player, the drummer and the guitar player. Even my brother (Rudolf) thought it was three different people. He said “Wow, the drummer is good looking!” and the drummer was me dressed like a woman.

You´re doing some shows with WASP in the US. Do you remember what you thought about them when they came out?

No, because I haven´t been listening to music for over 50 years, but if it would have been something worth it, I would´ve heard about it, like I did with Eddie Van Halen. He was an exception and Yngwie Malmsteen was an exception. Like Metallica, it happened when I was in a boutique getting dressed and I heard “The unforgiven” so I bump into music by accident. The good stuff made it to my ears. I doubt I would´ve liked it (WASP), because I was never a fan of theatrics on stage. I don´t think I would´ve liked to see Jeff Beck in that kind of surroundings because I would´ve liked to see how he plays his guitar rather than seeing all the gimmicks.