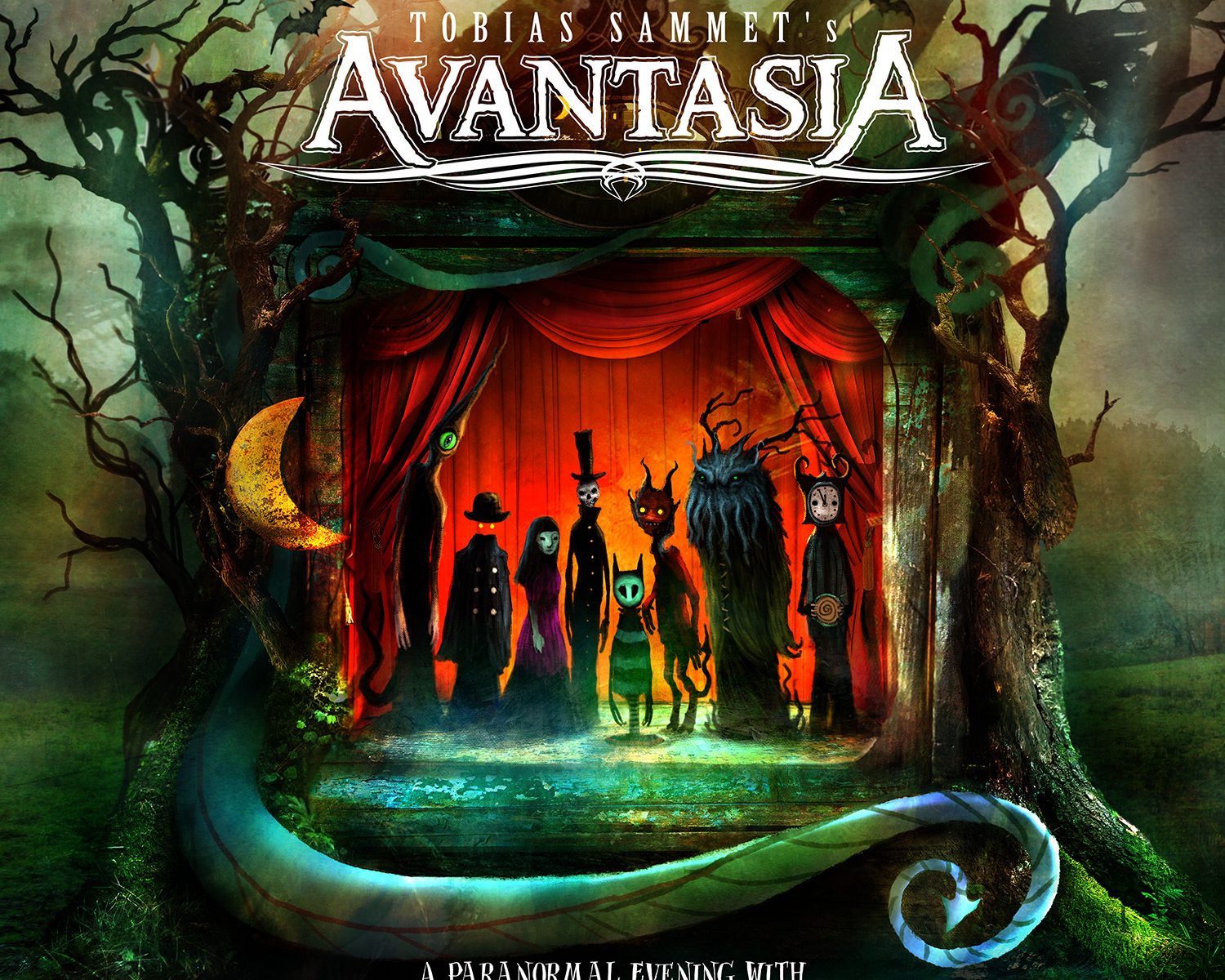 The title of the new album is “A paranormal evening with the Moonflower society” Are you into paranormal stuff? Do you believe in ghosts?

Well, I don´t believe in the normal… I don´t rule out anything, says Tobias. I´m not one of those people with heat cameras or what you have, who go to old, haunted houses and trace ghosts. I don´t do those kinds of things, but there are a lot of things I can´t fathom. It would be stupid to believe that what I see is what exists and what I don´t see doesn´t exist. I don´t see x-rays, but I believe they exist. I think in brief, my mind is not made to understand everything that exists. I don´t believe I´m surrounded by ghosts right now. I speak in metaphors, and I believe in inspiration and I believe in receiving ideas and I believe in sparks of inspiration. With a title I try to describe the feeling… when I close the door behind me to work on something creative, when those invisible entities take over… my ideas, my muses, my quirky inspirations invite me into a… I don´t want to say a different world that makes me escape reality, but I´d like to say an immaterial leg or reality. That´s the Moonflower society really, those quirky, invisible, paranormal creatures.

Ronnie Atkins is on the album and he´s in a strange situation with everything he’s going through with his sickness. Hanging out with someone like Ronnie, does that give you thoughts about your own mortality and such?

I think of my own mortality a lot because we have to be aware of the fact that nothing is forever. I think about that a lot in general and I had this key moment in 2019 when all of a sudden I was on stage with my dear friend André Matos In Brazil, who was a important part of Avantasia since the beginning. We were on stage and I thought “We should work together on the next album. What a great guys he is!” and six days later I get a text message from the tour manager saying André had passed away. Of course you think “This can´t be true!” I believe everybody know these situations when you´re facing your own mortality and you´re reflecting on your own mortality. With Ronnie it´s been like… of course it was very difficult for him. I consider Ronnie one of my best friends in the music business and he´s very loveable chap and a very funny and great musician. He´s like a big brother I would say. Of course we´ve been in close contact in the past three years, but it´s not much of a topic between us, because Ronnie wants to do his stuff and live and frankly, nobody knows when our time has come. I think he doesn´t speak or think about it that much. He lives and works and he´s in great shape and that´s what matters.

A favorite track of mine on the album is “Misplaced among the angels” featuring Floor Jansen. Tell me about the song!

It was written during the “Moonglow” (2019) album already in 2017 or something like that. At some point I had the feeling that it could be sung by Floor. I contacted her and she said she wanted to be a part of it. I sent her song and she said “It´s not exactly my range I believe. Don´t you have anything else?” I thought that was great. She was very honest, but after two or three weeks when she had recorded the song I had written with her in mind, she had also recorded “Misplaced among the angels” and I think she did a great job. She did the song, not just justice, but she helped it to bring it to a higher level, a way higher level. I´m so proud of the song because it´s not contemporary at all. I just focus on the quality and I think what is so convincing about the song, is the quality. It´s not a rock ballad or a power ballad you could hear on radio these days. It wouldn´t be flavor of the week, but maybe in 1988 or something like that. I believe the quality of the song is so good that it is still a very valid single and it´s probably my favorite ballad I´ve ever written. It´s so 80´s and not contemporary and who the fuck cares if it´s contemporary? I´ve never been flavor of the week. I also think Sascha Paeth has played one of his best solos. You can hear that he´s been influenced by Eddie Van Halen and the funny thing is that he did that solo on the spot and afterwards he said “I´ve gotta do another solo.” And I said “What the fuck! It´s the most proper solo I could imagine you play and you want to replace it?” No, no. I really love that song. Every aspect of it.

Of all the singers in the world, alive or dead, who would you consider being your absolute favorite?

That´s a very difficult question. It depends on the phases I go through, but it´s probably Ronnie James Dio. But if you ask me again in an hour I would probably say Lou Gramm and tomorrow morning I would say Steve Perry. It´s one of those three probably, but Ronnie James Dio is out of this world.

What was it about Ronnie? What did he have?

Magic! Fire! (laughs) The way he spat out those lyrics. The whole thing, the whole approach. He had such a gritty voice with a midrange. He was singing extremely high, but it never felt like it hurt and never really sounded harsh. He had a huge range and he felt those words he was singing. Everybody can become a trained singer and you can see it when you see those talent shows. You see all these singers who sound like Mariah Carey in her prime and it´s always amazing and they have great technique, but filling a song with character and life, that´s a different thing. That´s where the true quality comes out. You tell that story to the listener. Everybody can sound perfect these days. Especially in the studio with the technology. But doing something like Lou Gramm or Steve Perry or David Coverdale or Geoff Tate… I think everybody in Avantasia have that quality. They don´t just sing perfectly, they put soul into it. They make it three dimensional and they make those words come alive. That´s the greatest skill of a singer, to move you, to touch you and I think that is way more important than sounding like Mariah Carey with perfect pitch.

There are probably so many of the great ones that would never make it to the finals in shows like Idol or America´s Got Talent.

Absolutely and I agree 100%. I don´t consider myself the best singer in the world, but I would never get passed second round because people would say I sound weird and I have strange frequencies. Many of those singers we love, they are not those million dollar singers. They have a story to tell and their whole life is a story. I was just arguing with somebody about the situation of Paul Stanley´s voice. I say that Paul Stanley´s been in the trenches for 50 years and he´s Paul Stanley because there´s no other Paul Stanley. He´s the best Paul Stanley there is and he´s the only Paul Stanley there is. I will always prefer to hear Paul Stanley struggling with a note than having a pitch perfect replacement without a story, without the character, without the patina of Paul Stanley. That goes for all my favorite singers. I´d rather hear Rob Halford struggle a bit and suffer a bit when singing “Painkiller” Halford will always be Halford. There is only one and it´s the whole appearance. The story, the magic and the same with Ronnie James Dio. I saw him during the Heaven and Hell tour and you could tell that Ronnie´s voice had dropped and everything was a couple of notes lower than the studio versions, but still it was Ronnie James Dio. Fucking Ronnie James Dio! There´s a profound magic listening to the originals and that´s what I want from music. I want authenticity, I want the soul and the life and the scars and the damage and the road wear. The whole package that make those legends who they are and that makes them come up with their interesting stories that enchant me.

Could you ever work with a singer whose music you don´t really like, but the singer is great?

I think it could be interesting to work with a singer whose music you´re not familiar with or not the biggest fan of, if the singer has a voice that is enchanting and have something to contribute to what you have in mind. That´s perfectly fine. What makes Avantasia Avantasia is in many aspects the fact that I´m a fan of what I´m doing. Not just a fan of myself and my songwriting, but I´m also a huge fan of the people I work with and their work and records and that lights the spark in me. That´s the key of it, but if I will ever run into a singer with a great voice but I feel the band sucks, I´m not sure he or she would agree working with me.

Edguy´s been around for 30 years now. Will the band come back or is it just going to be more and more of Avantasia?

Right now I have no idea. I don´t know what I´m going to do next year, so I don´t know what´s going to happen in three or five years. I think it´s perfectly possible for Edguy to return and play shows together. That being said, right now it´s a pretty difficult time to predict which band is going to play which shows and which country. That doesn´t only go for bands on hiatus, but also bands that are active. With Edguy I want to be open and frank about it. The thing is that when you come together as a very young band, you´re 14 years old and you´re school friends, and in the beginning you´re all working toward the same goal and everybody contributes whatever they can… it´s like you´re on autopilot, but wen you´re together for so long, it´s very natural that everybody develops differently and everybody develops individually and you develop different work ethics and approaches and demands. We had come to a point where it was five different views on literally everything. It doesn´t mean that we don´t like each other. I speak to Dirk (Sauer) every four weeks on the phone. It´s perfectly fne, but it was better for us to work individually ad it was a great relieve also. I had come to a point where I wasn´t allowed to question what I wanted to do or question what I wanted to do no matter if it was Edguy or Avantasia. I was in a treadmill. I was burning out I have to say I had to cut it a little short and do less and that´s why I think this new album sounds so fresh.

I have a couple of ideas that pop up. I guess it would be either… Do I have to pick only one?

Go with two or three then!

Yeah, that´s one helluva funny cover! I´m not really a big punk fan, even though I started out as a punk musician, but that was just because we couldn´t play our instruments. We thought we were a glam rock band and that was Edguy when we were 14. First rehearsal and I had written an amazing rock anthem and it sounded like real bad punk, because we couldn´t play.