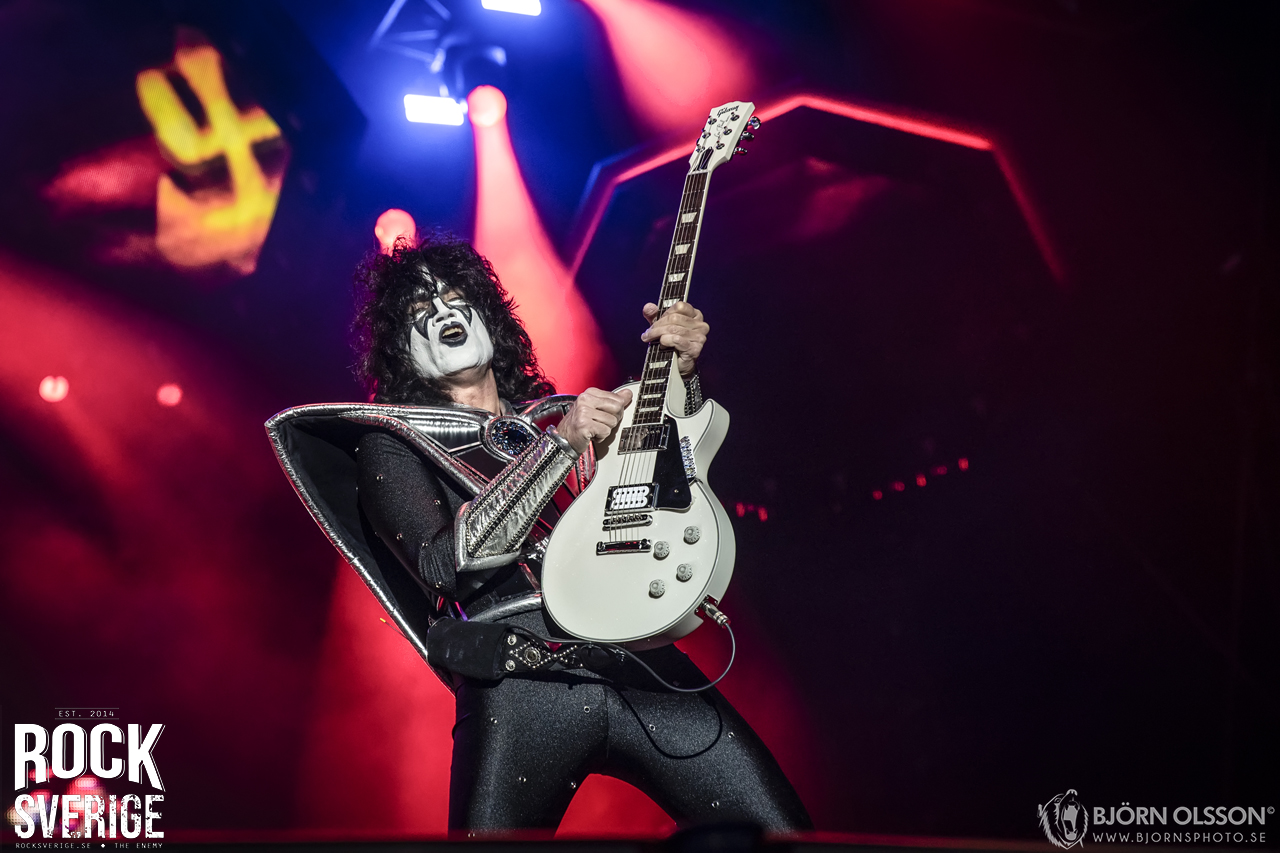 The KISS documentary, what´s the status on that?

That´s a good question. I think we´re at least halfway into it. The director is John Dorsey (We assume it´s the guy who made “Urban cowboy: The rise and fall of Gilley´s”, 2015) and he´s done great things before. We´ve done interviews on camera and he´s putting together a lot of historic footage and talking to a lot of different sources, including us and our archives. It´s coming along. I´ve seen a little bit and I think it will be really exciting and really well done.

Are you still looking at a fall release?

And fans have contributed to it?

I know that for a fact. I know some guys that are big collectors and there´s this guy called Mark Cicchini, he´s one of the “Three sides of the coin” podcast guys and he´s not only contributed material, but he also pointed John Dorsey in a lot of good directions as far as making contact with a lot of fans. We have a lot of great stuff in our archives for certain, but there´s still a lot of other unique and rare stuff out there that we don´t have. It´s a matter of sourcing that stuff.

About the biopic then? Is there a script yet or anything like that?

I think they´ve been working on it. I know less about that to be honest with you. I know that it´s in the works, but I don´t think they´ve started filming anything yet, but there´s definitely a lot of planning and that´s about as much as I know. 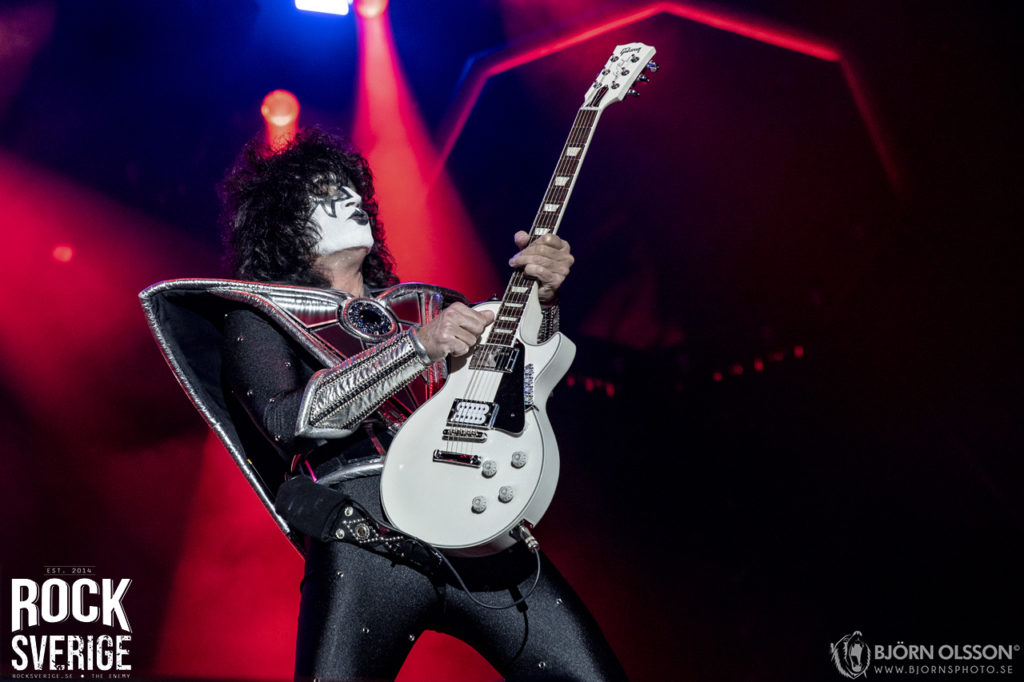 Deluxe versions of KISS albums then? I know you´ve mentioned “Creatures of the night” (1982) before and that you couldn´t really find any material. Metallica have done some amazing box sets. Do you know if there are any thoughts about doing anything like that in any way?

Well, all that kind of stuff is always on the table. We did the “Love gun” (1977) Deluxe edition and we were talking about “Creatures of the night” Sometimes it´s hard to find all the bits of information you hope to have, but there´s always going to be more things like that because there´s a demand for it obviously, like with yourself and the true fans want to see all that stuff, so we keep working on it. As well as “KISSOLOGY 4” which has been in the works too and there´s a lot put together and hopefully when the time is right we´ll put that out too. It´s just that there´s so much other stuff going on all the time, so it´s difficult to do everything at once. 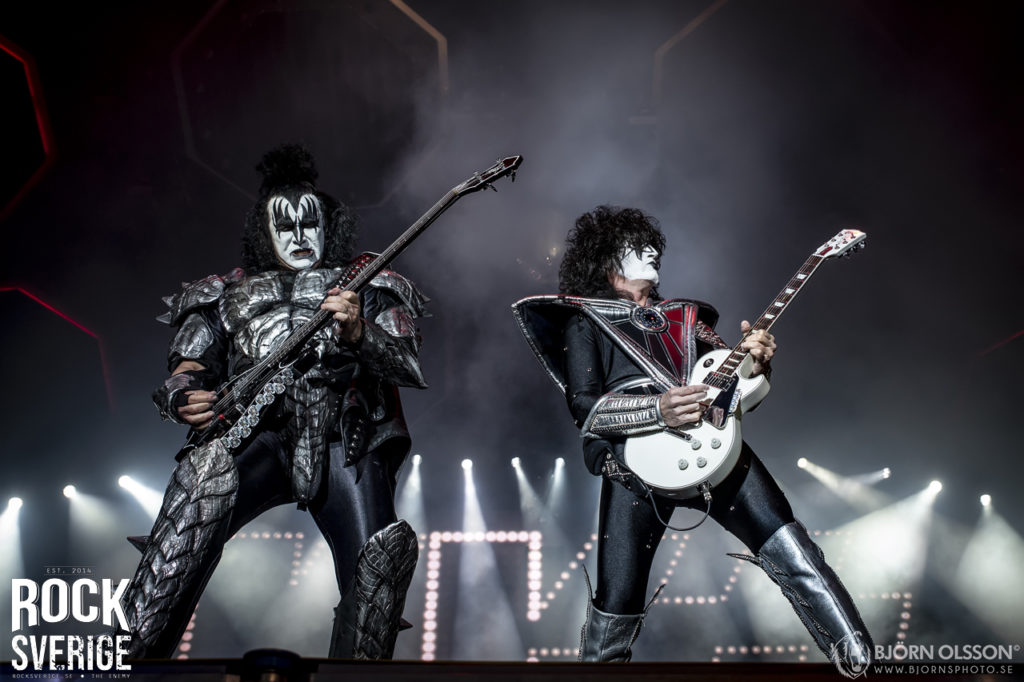 When this final tour is all over, do you have any concrete plans of your own, musically speaking?

No and I´ve been asked that a lot. I don´t have a definite plan after July 2021. It´ll be here before we know it, but I´m not really focusing on that. I don´t think anybody really knows what´s going to happen. We´re just focused on what we´re doing right now. But I do say that KISS will live on. The brand´s not going away and the music and the imagery will always continue because it´s so strong and I think there´s a lot of things that could actually come out of that. As far as my involvement? It´s possible, on some level. I don´t know exactly what that would be right now, but KISS is not going to go away. There´s too much of a legacy and history with the band, that it has to continue on as a living thing.

Will we see a KISS hologram thing?

(laughs) How about if KISS can continue as a band, but maybe with different people? It´s a controversial subject, but if you think about in a way, it has already happened 50% the last 18 years. A lot of people said it could never happen and some people still have some problems with it, but the vast majority of people are loving KISS as it is now and you can tell when you go to shows, they´re big and people are as excited as ever. The band could continue to transform in years ahead, you just never know. 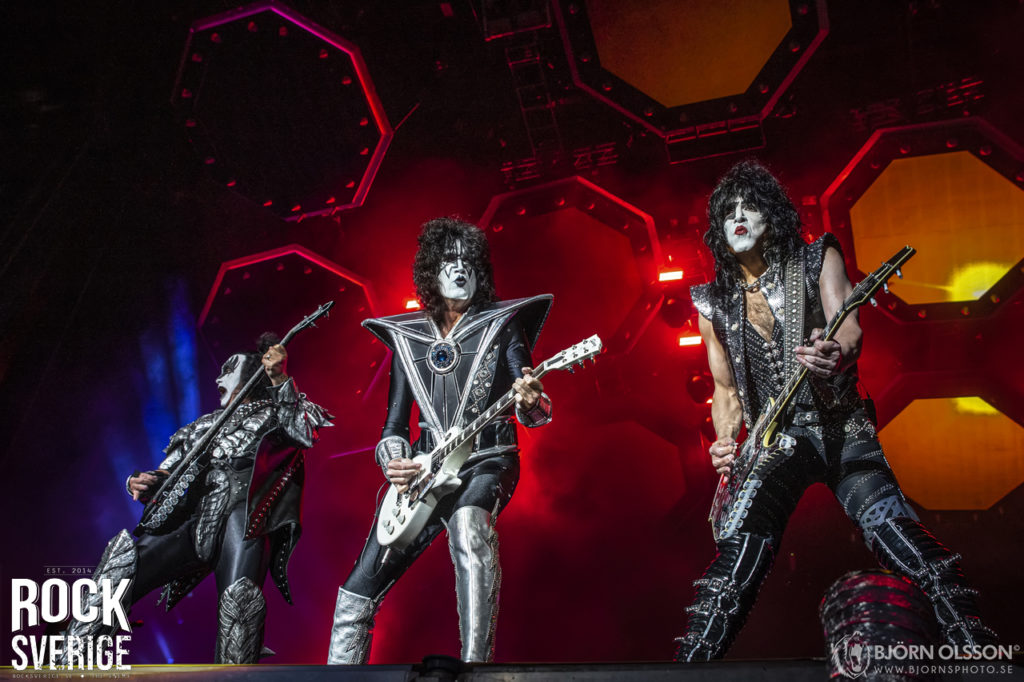 You´ve been in the band for a long time now. Not counting this final tour, what would you say has been the most fun during all these years?

Touring in a band like KISS is always fun. It´s not all fun because it´s a lot of work too. What we do take a lot of effort and focus certainly, but it´s been great fun and to be part of something like this and to be in the band for 18 years is a dream come true in so many ways. Myself, like a lot of others, growing up I dreamed about being in a band like KISS and the fact that I got to live that dream myself,,, sometimes I can´t believe it and I´m kind of pinching myself like “Wow, I can´t believe this is all happening!” It´s exciting. 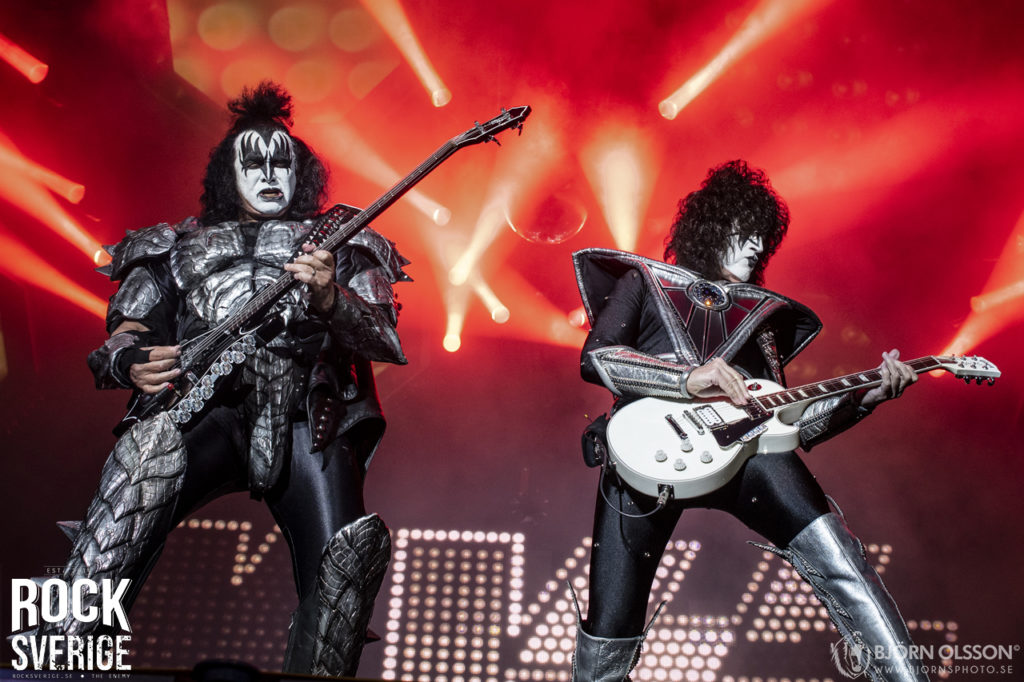 On a tour like this, do you tend to spend most of the time with Eric (Singer, drums) or du you all spend a lot of time together?

We´re all together a lot because of travelling and day to day living together really, because we´re travelling and you´re in the same vehicles, the same airplanes, you´re in the dressing room together. We´re around each other a lot, so when we´re on the road.. down time you´re resting a lot and so we get a little bit more of our own individual time at that point. But I do hang out with different guys in the band. Paul and I might go to dinner or Eric and I will go out and have coffee. We still really enjoy to be around each other, unlike a lot of other groups. We get along together and I think that kind of is the key to the band being as strong as it has been for 18 years now. It works well, the chemistry between people and that´s important, because it´s not always like that.

You yourself, do you have any preshow rituals before you hit the stage?

I find myself going through the same routine and I think there´s comfort in that and I understand why I do that. I think professional athletes do the same thing, like when golfers are getting ready for a professional tournament, you kind of have a lead up that you do. We arrive at the venue and then we eat dinner and then you start your makeup process which we do for 2 hours, so there´s a whole routine to that. I can´t imagine not doing it. It´s kind of the transition to the lead up of going on stage. It kind of gets you in this groove and once I put my makeup on, we do our M&G photos and that maybe takes half an hour and then I pick up the guitar and play for about 5-10 minutes. I kind of go through the same things each time as a warm up, but it gets you in a comfortable groove and leads you into going on stage, which is really the moment. I find comfort in that routine.

Have you had a chance to have a chat with mr Diamond Dave?

(laughs) He´s an interesting guy, that´s for sure. He travels a lot on his bus and we´re kind of in and out since we´re flying. When these guys get into the bus thing, he´s literally on his bus until he goes on stage. It´s not like he´s hanging out backstage the whole time. I´ve seen him a couple of times, but I haven´t had the opportunity to talk to him. He´s an interesting personality with a lot of energy. He kind of blows in and goes the show and then he blows out. We did some photos together the other night, but he´s quite the personality, there´s no doubt about it. He´s always yammering and yammering about something. 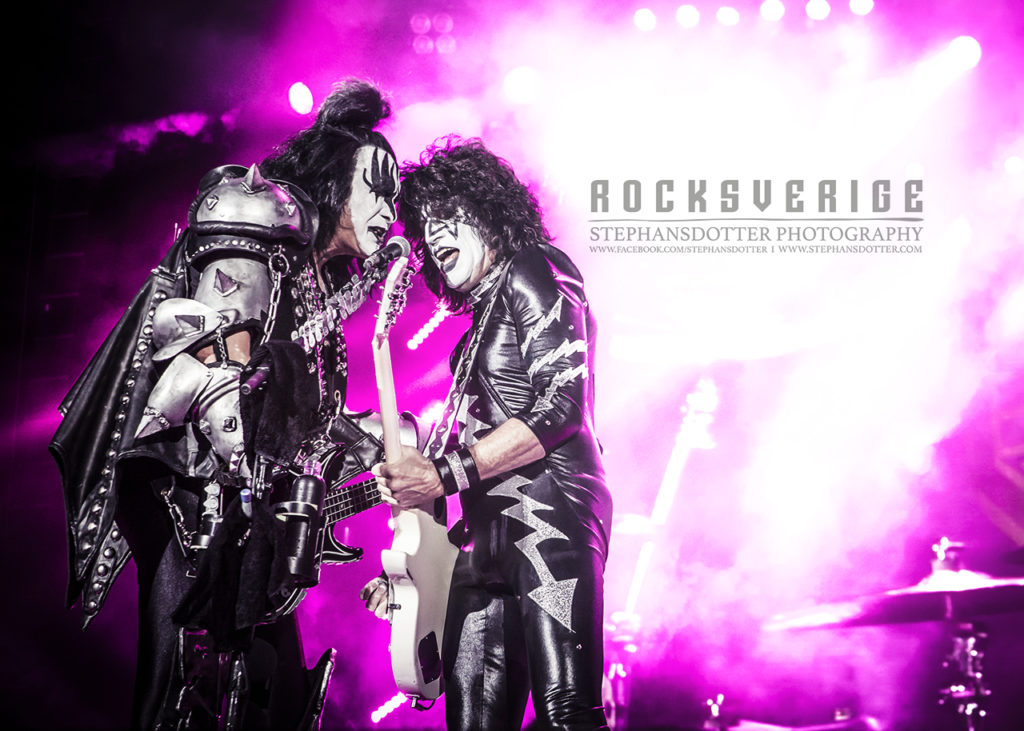 With this tour being so successful and all the other tours you´ve done with KISS also being successful, a guy like you, are you financially set for life now?

(laughs) I´ve been doing pretty good and I´ve been very fortunate to be in this band and because the band is so successful and also the kind of uniqueness of what it is… we do well. I´m pretty comfortable and at my young age, I´m still 50 something so I´ve hopefully have a few years ahead… I can´t rest too easy on my laurels although I´ve seen a lot of good rewards of success so far.

A final thing. Back on the “Psycho circus” tour when KISS came to Stockholm and you worked with them, a friend of mine met you and Gene at the hotel and he had a Black ´N Blue album (In heat, 1988) that he wanted you to sign, but you wouldn´t. Gene signed it though.

I don´t know. Was that something you did back then, that you didn´t want to involve Black ´N Blue stuff?

It might´ve been, because back when I was doing the tour managing and the road managing, I think I didn´t want to present myself, especially around the guys in the band. I didn´t want to present myself like “Oh, I´m such and such and this and that and I want attention.” or anything like that. I think maybe I purposely kind of shied away from that. I wasn´t in the band then and I was doing more behind the scenes work, so maybe I took more of that role. I hope I wasn´t rude when I didn´t sign it, but I think it was probably more about my sensitivity to those guys in the band. I worked behind the scenes and I didn´t need that spotlight or attention on me. It was more of a respect thing. 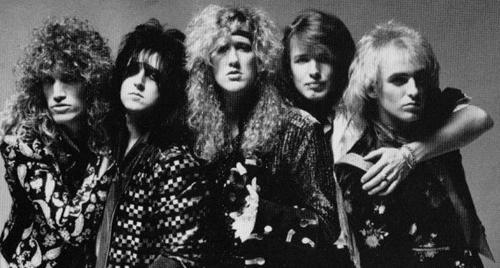 Would you be up for making some music with Black N´Blue when you´re done with KISS?

I´m always open to everything really, if it makes sense to do something. Not that I´m going to be getting back into the Black ´N Blue world. Those guys are still my friends and I can see me doing something with them just for fun. I wouldn´t count that out. I just got them on the KISS Kruise this year. They´re going to be officially added to the lineup. I´m still close with those guys and we´re like long time pals. I don´t count anything out like that.