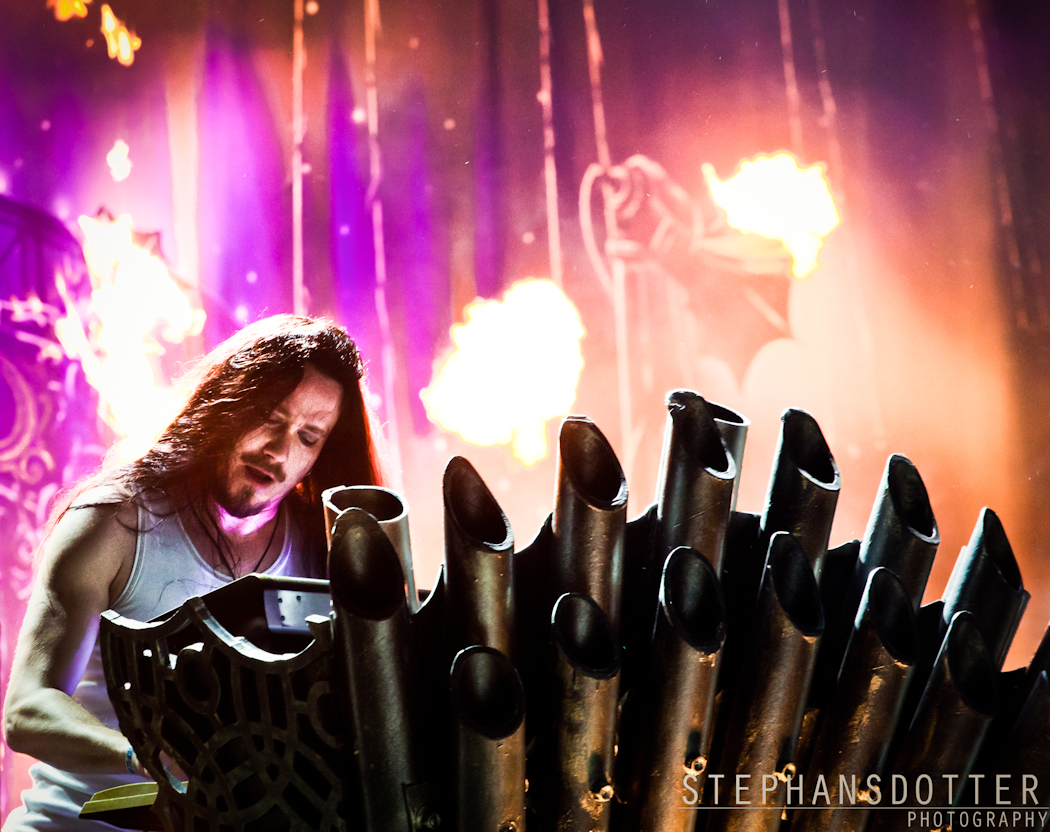 – We finished the demos about two months ago. We´re hitting the studio next summer, so in about a year from now. Like I said, might as well use the time for something.

”Appetite for destruction” turns 35 this year. Is that an album that has had any kind of impact on you?

My big brother was a massive fan, but Guns N´ Roses has never been big for me. I appreciate it and I think they´re the real thing and they have some really good songs. “Paradise city” has one of the best guitar riffs ever, but it´s just a bit too rock and roll for me. I´m more of a metal guy.

Which album has had the biggest impact on you then?

It´s a tie between two albums, the “Black album” by Metallica and “Wild frontier” by Gary Moore, back when he was still doing hard rock and before the terrible blues era. Every single song is a gem. “Over the hills and far away” is fantastic. But if I had to choose only one it would be Metallica´s “Black album” It changed everything for me. Seeing them live September 22nd 1992 at their peak, after that show I bought all their albums and that kind of led me to Megadeth, Pantera, Ozzy… I´ve been a metal head since.

Don´t you kind of miss old Hetfield who used to say fuck in every sentence during the live shows? It was more aggressive and they didn´t give a shit.

Well, people get old. We all get old, so you have to give them the benefit of doubt. We actually play just before them on the same stage in a week at Pinkpop, so we´ll get to see them then. I think Hetfield is one of the most underappreciated metal singers of all time. I really think so.

Have you stayed in touch with mr Dawkins?

Not since he had the stroke. That´s when I sent him a text. It was maybe a year and a half ago, but nothing after that. He fully recovered.

Are you working on the next album?

I´ve got all the songs done during the pandemic. I might as well use that time. We listened to the demos for the first time with the whole band about three weeks ago when we were in America. Things are rolling.

I talked to Wolf Hoffman yesterday and he did nothing during the pandemic. How did you feel during all this? Did you ever get the feeling that you might never play live again?

No, not even close. The initial shock was terrible. The album (Human. :II: Nature) had just come out and everything was cancelled. I was really distraught for maybe a week or two. After that I started feeling guilty pleasure, because it was so much fun staying at home doing nothing. I felt rejuvenated and it felt really good for a few months and then I started to get really bored. Then came the recording of the Auri album (II – Those we don´t speak of) and we have this black metal band (Darkwoods My Betrothed) get warmed up again and after finishing that I started writing for the next Nightwish album for about a year and then we finished the demos about two months ago. We´re hitting the studio next summer, so in about a year from now. Like I said, might as well use the time for something.

Did you get any kind of inspiration from the pandemic?

Yeah, lyrically there´s a couple of things that reflects the pandemic, but not in the way you would expect.

What was it like to get back on stage again after all this? How many shows have you played so far?

Last year we did two virtual shows and three festivals and this year we did the North American tour, which was 13 shows and Sweden Rock Festival is the second festival show. We´re catching up. It was exhilarating, really exhilarating and you can really sense it from the crowd as well. They´re super hyped. We´re finally getting back together as human kind and having a party.

When you get older, do you think you´ll ever sit down and write a book?

Never say never, but I really don´t think so. There´s already two books written about us and I have a personal feeling that people already know much more than I would like to. I mean, my all time biggest musical hero, Vangelis, died a few weeks ago (May 17) and I know absolutely nothing about him. Nobody knows about his personal life and I just love that feeling and that aura of mystery. I wish we had the same, but that´s impossible to bring back.

I miss the time before the internet when you bought a new album and you knew nothing about it.

You might have seen one song on MTV, but that´s it. It was like that for me with Pantera´s “Far beyond driven” (1994). I was so excited about that album. I knew nothing and I just saw some posters and they looked so cool and “Far beyond driven” sounded so aggressive. Then being there on the day it was released and biking back home and listening to it on repeat. That never happens anymore and I miss that too.

These days it doesn´t matter which band it is. Before the release you know all about the songs, you know who produced it, there´s in the studio videos and stuff. There was a surprise element to it.

Absolutely and especially with the concerts. You didn´t know what to expect. Now you get to see everything filmed with an iPhone and crappy sound. Internet has ruined things like that. It´s a surprise the first time you do something and then everybody knows it.

But then you have stuff like the last David Bowie album that no one knew about and I think Beyonce did a surprise release of an album. Would that be possible for Nightwish, to do a thing like that? Secretly record something and just release it out of the blue?

I can definitely see that happen. Not the next one since I just told you. (laughs)

Would the label be ok with a thing like that or would that be a problem?

It depends on the label. We don´t have a label at the moment, so let´s see where we are then.