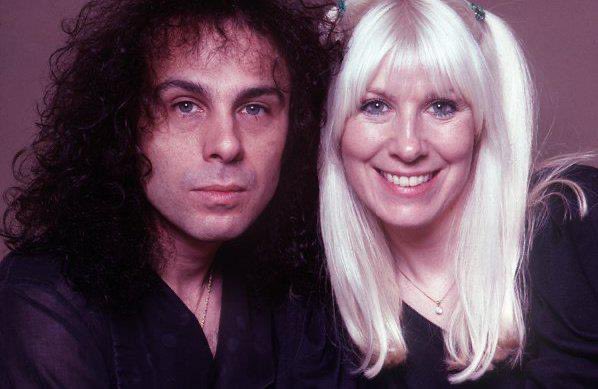 – Sweden was one of Ronnie´s favorite places to play in the whole world. He absolutely loved the Swedish audience. You´ve got the crazy people and you just go crazy. A lot of times in London and stuff the audience is a bit too reserved, but he said in Sweden he always had such a fabulous time because the audience was just with him all the time.

Way back when you met Ronnie, what was it that made you fall in love with him?

I think his brains. (laughs) He followed me around and I thought he was a bit short for me. Ritchie Blackmore introduced us and I thought he was a bit short, but he kept following me around and he was talking and he was just an amazing person. We started dating and he asked me to go on tour with him and I said “I can come for a couple of weeks, but I can´t quit my job.” and I ended up quitting my job and the rest is history. That was around 1976.

Your last name before you took the Dio name, was Gaxiola? Where does that come from?

Yes, my last name before I met Ronnie was Glaxiola. I was married to a ski instructor.

Ronnie was known for being very kind and he always had time for his fans. Where do you think that came from?

Well, he was brought up very well. His parents were very kind and his mother was the same I think. She was a beautiful person and never had a bad word to say about anyone. I think he was just brought up very well and he loved his fans so much because he always said “I wouldn´t be anywhere if it wasn´t for the people that believed in me.” and the people that believed in him were his fans. In the beginning it wasn´t the record companies, it wasn´t anyone. It was his fans. People loved him and he was just a very special person and I think they broke the mold when he passed away. He really loved people. He loved people, he loved talking to people. He was so well educated and so well read that he knew everything about anything and he could talk to anyone from age 8 to 80.

Could you pick your favorite record of all the ones he recorded? Is there one that stands out for you?

Well, it has to be “Rainbow eyes” because he wrote that song for me, so I have to pick that one as a song. As an album, probably “Holy diver”, because we fought so hard for so long to get it out.

Tell us about the upcoming live albums then?

BMG has done an absolutely amazing job. “Holy diver: Live” was recorded at the Astoria in London in 2005 and it´s got the most beautiful photos in it. There´s new artwork by Mark Sasso who did a lot of albums for Ronnie beforehand so I´m sure Ronnie would´ve really approved of what he´s done here. He´s changed things around. Beautiful pictures inside and this is the lineup with Doug Aldrich, Rudy Sarzo, Simon Wright and Scott Warren. And this is when he performed the entire album which he normally didn´t do. There are three cds, but when you get into the vinyl, it´s so amazing! I can´t believe the job BMG did on it. It is a lenticular cover and they changed around the artwork a litte bit. You´ve got Murray dangling the priest and little devils flying around, but it´s so beautifully done. There´s also a poster in there. It´s just a beautiful job and I´m so excited. Then you have “Evil or divine”, which is also a lenticular cover with three vinyl albums inside. This one is from New York City at Roseland in 2002. This lineup had Jimmy Bain and it´s beautifully done again, with beautiful photos inside and beautiful artwork. This one also has a poster. Each vinyl has beautiful artwork on the sleeve. I´m so impressed by what they´ve done. It´s a collector´s piece for anybody, whether they have the albums before or not.

Vinyl is really the way to experience an album, the way you can look at the artwork and all that.

Absolutely! Ronnie always loved it. He was so disappointed when cassettes and CDs came out. He said the album cover was the artwork and Ronnie wrote songs and had images of things that he loved to have on vinyl. The cover was something he always loved to look at. It´s back and we´re very happy it´s back.

What other things are in the pipeline?

We have a lot of stuff going on and a lot of stuff coming out. I have the book, Ronnie´s autobiography, finally finished with Mick Wall and I think it´s coming out on Ronnie´s birthday July 10th. Ronnie had written half of it and Mick Wall and I got together and found lots of interviews so I wanted it to still be in Ronnie´s voice. I´m very pleased with that. Then there´s the documentary with BMG and it´s probably coming out next year. We´ve been working on that and then it had to stop for a little bit because of them having to go to Europe to interview more people and because of the travel bans they haven´t been able to do that. Hopefully it will come out in 2022.

And the documentary will cover his entire life with stuff from Elf and so on?

Everything. Right from his childhood. We´ve been working on this for a couple of years. I´m not supposed to talk about it because they said they don´t want me to blow everything now and then there won´t be anything to talk about when it comes out. (laughs) Sweden was one of Ronnie´s favorite places to play in the whole world. He absolutely loved the Swedish audience. You´ve got the crazy people and you just go crazy. A lot of times in London and stuff the audience is a bit too reserved, but he said in Sweden he always had such a fabulous time because the audience was just with him all the time.

A final thing. This year marks the 35th anniversary of Hear N´Aid. Any memories of that?

Oh gosh yes, that was such and amazing time! We are going to do a rerelease of that sometime down the line. It´s a lot of work and I´ve got a lot of things going on. Obviously that will be for my charity as well. That was an amazing time. Everybody came and there were no egos and Ronnie had such a good time producing and working with those guys. Everybody asks me about it still and they always want to know if we´re gonna do it again and I say “Yes, we will.” We´ll do some new stuff with some new bands. Everybody always asks me about rereleasing it, but we have to have time. Ronnie didn´t just throw something out. It was something special and I don´t wanna let him down. I wanna expand on it and make it special and there are some young bands coming on as well and there is a lot of footage there was never seen before that we would wanna put out. It´s in the works.