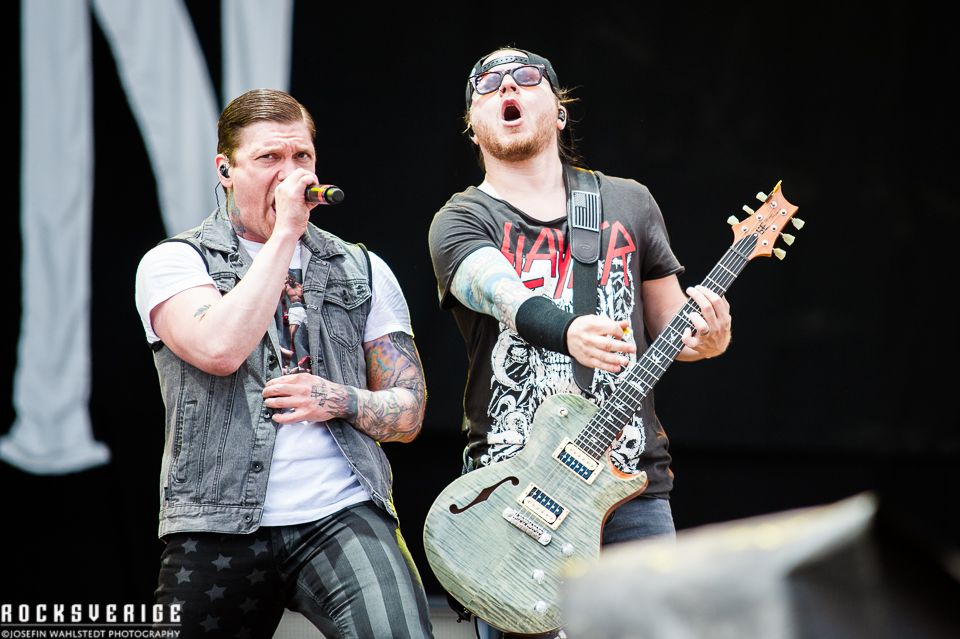 “What we didn´t account for was that we made the mini Stonehenge out of foam and the rope weighed more than the foam, so it wasn´t heavy enough to come down. Our stage manager is shaking this rope and it´s so Spinal Tap. He´s shaking the rope and it´s not coming down.”

Is playing festivals harder, since a lot of people are not here just for you? Do you feel you have to work the crowd harder to win them over?

It´s harder and it´s easier. It´s easier because there´s a built in crowd no matter what, so you´re playing to someone. It´s harder, because this is maybe one of the most diverse line-ups I´ve ever seen and probably the best one we´ve ever been on, simply because of Slayer, Queen… the coolest line-up ever. I think, for me, going on stage, I think this line-up is a little bit universal though, it´s not just heavy bands and us. I think it´s gonna be easy, but I think there are festivals over here that are very heavy. We´re on one at the very end of this run where it´s super heavy and there´s Shinedown. I think sometimes it´s hard because we´re not as big over here as we are in America, so I think, trying to win those people over may be a little difficult, but I think it´s gonna be a lot of fun. That´s a fun challenge. There´s harder challenges in life, I´m sure. Are you gonna check out any other bands? Queen?

We´re leaving before Queen, which I´m pretty bummed about. I wanted to stay and see Queen. I´ve watched videos with Adam Lambert and Queen and I think it´s amazing. I don´t know if there´s really anybody else who could´ve taken that and filled in that spot. There´s no taking that spot, but filling in that spot… I think maybe I´ll watch a little bit of Slayer, but I´m gonna go see Sixx:A.M. in a minute. Good friends of mine. It´s fun. I love festivals in Europe just because there is diversity between bands. Most of the time in America, if it´s a rockfest, it´s a rockfest and that´s just what it is.

You mentioned that you´re bigger in the US, with a bigger tour production and so on. I saw an amazing photo by Robb Fenn, where there´s flames and stuff and stairs and different levels and it kinda reminded me of KISS in 1977-1978.

That´s a compliment. We worked really hard on the show. We´ve been working on the summer show for a while now tirelessly and the production over there is just a lot of fun to do and I hope one day… maybe this tour we´re doing in the fall with Five Finger Death Punch and Sixx:A.M., maybe could come over here? At least come to the UK and maybe bring the big production. We´ve done pyro here one time in London, at Brixton, but it would be cool to come and do like an arena co-headline tour and do all the bells and whistles. We still love big productions, we still love pyro, we still love all that stuff, so for me, getting to do that stuff and be on the stage when all that stuff´s going off… this band never too far removes itself from ourselves as kids and we never too far remove ourselves from being fans, so when we get to have that stuff, it´s still really cool to us. We kinda get giggly like little school girls. It´s always fun to have that stuff. My dream is to come over here and be able to have that stuff.

Has there ever been an incident? Not like the James Hefield one, but when you´ve got stuff like that going on on stage, there´s gotta be times when you´ve felt the flames zing your hair?

Oh yeah! We´ve never had anything dangerous, but we tried something kinda crazy on this last tour. We had flame units up top shooting down at the stage, very Rammsteinesque. One night, it was in Lubbock, Texas, one of the flame heads got stuck and it stayed on for like two songs, so when the song´s over there´s still this giant fireball shooting down. That was kinda funny, but nothing like in the way of dangerous really. We stay pretty safe with that stuff. That´s very Spinal Tap. We´ve never had a Spinal Tap moment with pyro. We´ve had a Spinal Tap moment pranking another band, trying to do a Spinal Tap joke. Which is the best like redundancy you could ever have. There was a band called Sick Puppies and it was their last night. What we had done was that we had created a mini Stonehenge and we had hung it from the rafters and we were gonna descend it down to the stage. There were obviously no real dwarf druids, so we got these two little kids in the crowd and we got them druid outfits and they had them on. Right before their last song we cut the PA off and we started playing “In the beginning…”, all that stuff. The spotlight hits the mini Stonehenge, but what we didn´t account for was that we made the mini Stonehenge out of foam and the rope weighed more than the foam, so it wasn´t heavy enough to come down. Our stage manager is shaking this rope and it´s so Spinal Tap. He´s shaking the rope and it´s not coming down. Eventually it falls and hits like a drum and crashes down. He runs up and sets it up and then the kids started dancing around it. That was probably one of the funniest moments to me, just because you try to do a Spinal Tap. We´re pretty proud of that.

Where do you see Shinedown in 10 years from now, with the music industry being what it is?

I feel like we´ve gone through a couple of the music changes. I feel like we´ve already kinda surfed through those waves. It´s weird. That question is something I think a lot more about now that I have a child. You have these visions when you´re in a band and when you´re a father. One of those was always that I want to still be doing this when my kids are old enough to think it´s cool. I hope in 10 years we´re, if not exactly where we are, we´re even further. I don´t wanna be anything less. I think, even with waves in music, if you like good songs, your fans are gonna stay with you and you´ll gain more because maybe they´ll teach their kids to like your band or whatever. It´s definitely something I think about having a child now. I want my son to be able to come out on tour with me when he´s seven or eight. He´ll be out with me this summer, but he´s only four months old. I definitely want to be still doing what we´re doing, because I love what we do. The world has lost Lemmy, Bowie, Weiland, Bain, Prince. Was anyone of those guys a musical hero or someone that inspired you?

Almost all of them. It was weird that it kinda came in this wave of people. Bowie, that really hurt, as an entertainer. I kinda based a lot of, I think I do, as an entertainer, a lot of what Bowie did. Very much an innovator. Glen Frey hit me more than Bowie. I´m a big Eagles fan, so that hit me. The Scott Weiland thing was a little bit too close to me. Frey and Bowie are up here. You can´t touch those guys. Weiland was a peer. It was someone we played shows with many times. Someone I´ve met many times, so that´s weird. The Prince thing crushed me. That was the biggest blow to everyone in our band. Our intro tonight is Prince. That was like the hardest one. That was kind of a Michael Jackson thing. He was such an innovator and things like that. He had such and influence on a whole generation. Bowie did too in a different way, but Prince was like… youth… that was everything we do. That one still hurts, man. The Prince thing still hurts today. That´s a brutal one, but I think it´s just a realization of that we´re getting older. When we were kids we never thought any of these people were ever gonna be gone and now they´re gone. It sucks. There are not a lot of people like that anymore and that´s the biggest bummer to me. There´s not another fucking Prince, man! No one´s gonna come out in fucking assless chaps, you know what I mean? And be that badass. You´re so badass that you can wear the fucking craziest outfit in the world. There´s not a guy that´s gonna say “Fuck these record labels, I´m gonna be on my own!” Those pioneers of, no pun intended, raging against the machine kinda thing. I´m wondering where the world is heading musically?