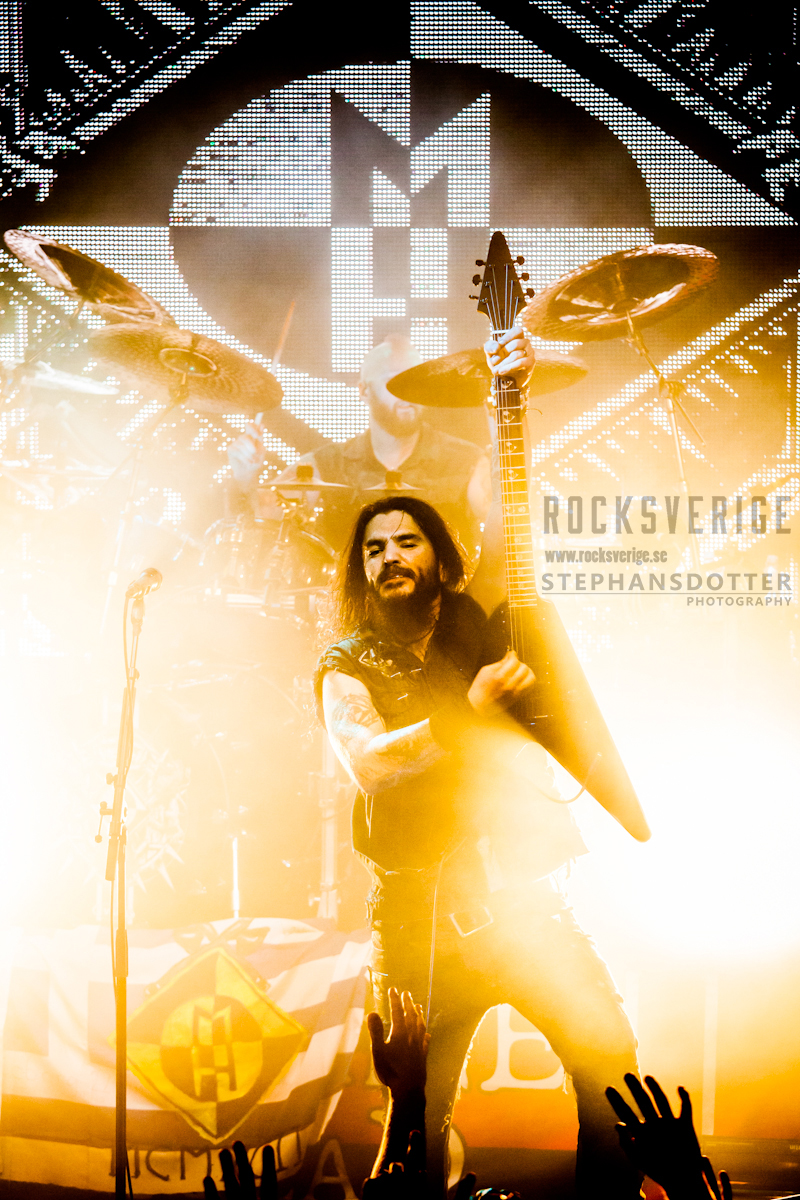 I think the biggest challenge when you get to this point, is having not just continued to repeat yourself. There´s this great Bob Dylan quote, “You´ve got to find new ways, to say the same thing!” and that is so true.

I read your ”journals” and you mentioned that you were putting down layers and layers of vocals and guitars on the album and comparing it a bit to Queen. Has it always been like that or is that kind of a new approach to it?

Robb: I think I started it more around “Unto the locust” (2011). The opening track had 20 tracks of vocals and all this sort of crazy shit. I think when I´m building it, I just hear harmonies and I hear stuff and I think in the past, I was more afraid to do that stuff. Like, “Harmonies… people will think we´re pussies.” And now it´s just like, “Fuck it! I don´t care if people think we´re pussies. I think it sounds cool.” We just went and did it and on some songs, like that song in particular, there´s like ten tracks of vocals on the chorus and I just think the way it sounds, is cool. At the end of the day, it´s still a heavy vocal.

With all the technology today, does it ever come to a point where you just have to say, “Stop!”?

Robb: Oh yeah! Totally! There are a couple of songs on there where I put a bunch of three part, four part harmonies on there and then I listened back after a while and went, “This is just overkill! It sounds fucking stupid!”, so I just scraped it down to two simple harmonies. There´s definitely still something to be said for simplicity. I think that, when you play metal, there´s a tendency to that you wanna busy up something that is there. Especially in the thrash scene I grew up in. Sometimes it´s just the simple ideas that are the coolest and if you can just resist the tendency to fill it with millions of this and that, it makes it that much heavier. That was one of the things we focused on with this record, stripping down some of the drum beats and locking every guitar hit, onto the kick and onto the snare, and it´s fucking hard! Simplifying it and in some ways you can´t simplify it and it´s just locking it in to every measure. I haven´t really done that before, so that was a cool challenge.

I also read somewhere that you had a song with the working title “Blazing saddles” and that it was too fast and you had to rearrange it. Did that one become another song on the album?

Robb: Yeah, it did. It became “In comes the flood” and now it´s just a simple song.

I´m not a musician myself, but how do you end up writing a song that´s too fast?

Robb: (laughs) It´s never too fast! The 20 year old me would´ve said “It´s never too fast!” It was a combination of a few things. It was super fast and brutal and unbelievably hard to play. It came at a time during the writing process when we had just taken a big break. I had kinda hit a writer´s block and it came about and kinda broke the writer´s block and in that sense it gave me this huge inspiration and whether that inspiration lasted or not, didn´t really matter because after that, so many riffs and so much music came out of that. It was kinda like the straw that broke the camel´s back and it was awesome. The dam burst with that and then when we went back and reflected on it after writing for a while, it was like “This song is not that good, but it´s got some good parts and it´s got some good think to it, but they way it is now, it´s too hard to play.” I was like warming up for two hours before we went to practice. It was like “I´m too old for this shit!” I´d like to go gracefully and I still like challenges for myself and there´s some brutal stuff on this record, but I´m not trying to outfast everybody at my age. At this point, with album number 8, I don´t need to outfast everybody. If I´m gonna outdo anybody or anything, I wanna outgood everybody! Whether that´s a slow song or a fast song. Now that song is just a really cool song. It´s a better song than it was back then.

Having a new guy enter the band, I guess that changes the chemistry a bit? Is that a process that takes a long time or does it just work right away?

Robb: He brought a killer vibe and he was really what we wanted in a band member. He got signed, put out records, done tours and never made it and he had actually filled in for us before. He´s just cool dude, man! He came in and just brought like a really cool vibe and wants to be here. So much of being in a band, is that you´re around each other for so much time and someone who just wants to be there, can make a huge difference moral wise, opposed to someone who hates being there. He´s got killer vocals and he´s a killer bass player. It´s cool.

You´ve said that this album is a milestone for Machine Head. In what way?

Robb: I feel that we really challenged ourselves with this. I think we gave ourselves enough time to write, but had the possibility of giving ourselves some distance away from each other from time to time and just get some perspective. We´re never gonna come out with that brand new record and that brand new sound, like when “Burn my eyes” (1994) came out and it was a new sound and we´re never gonna be that again and I think the biggest challenge when you get to this point, is having not just continued to repeat yourself. There´s this great Bob Dylan quote, “You´ve got to find new ways, to say the same thing!” and that is so true. You´ve got your core sound and you´re always gonna have your core sound. Machine Head is part of my DNA, of our DNA and it´s always gonna sound that particular way. To bring in new elements, to try new things, to mix it up and just let the music take you where it takes you, I think that´s the most important thing. You can´t try to make it a certain way, because then you´re putting limitations around the way it could be. You gotta kinda just let it stear you and that´s scary. I´m friends with Tony La Russa, the baseball manager, and he was like, “What´s it like writing a song?” and I said “Writing a song is like walking through a completely pitch black room, looking for the door knob. You have no idea where you´re going and then when you find that door knob, you open it up and you realize it´s another completely pitch black room. Eventually you find those door knobs and you get out and at a certain point it all makes sense and you know where you´re at and where you´re going.”

Didn´t you meet Robin Williams through La Russa? What was that like?

Robb: Yeah! I got to talk with him a little bit. I could´ve sat there and talked with him all night, but I kinda backed off. He had just gotten off stage. He was super cool and the guy was so sharp. His wit! He had the ability to kinda like free associate ideas and he could take something someone said in the audience and it was just crazy. He did stand up that night and I watched the show. The coolest thing about the show that night, was that it was an art benefit and there were a lot of well to do, older people and it was very expensive to get in, a lot of people in their 60´s and 70´s and he just went out there like, “Fuckin´motherfucker!” and I was like “Holy shit, dude!” and everybody was like “Oh my God!” and after a while everybody just loosened up and it was just fucking hilarious. I talked with him for a little while about some of the stuff he´d done. It was cool. We took a picture and that was basically it. I can´t remember any outpouring like that for any celebrity in recent memory. It was pretty fucking shocking! Maybe it was because it was a suicide or maybe because he was so funny and he won Academy Awards and he was so successful? Who knows? You could always sense that there was darkness there, even in his stand up.

What do you know now, that you wish you knew when you started out?

Robb: I don´t wish for anything. I think everything happens for a reason and the things you do are the lessons you learn from. I try my best to learn from my mistakes and in some ways, it´s what makes you wiser.

A final thing. Not counting the new album, do you have a favorite Machine Head album where you feel that everything clicked? One you always go back to?

Robb: I never go back to older records. I mean, every once in a while I listen to a song or two. I was watching Johnny Depp on David Letterman not too long ago and he said that he never watches the movies that he does and I get it. I totally get it. You work on it for so long, you record it and then you go out and you tour it. Certain songs are a bit more emotionally attached to me in some way, but it is what it is and it´s cool. I listen back to it and I remember where I was 10 years ago, but I just wanna keep on going forward.