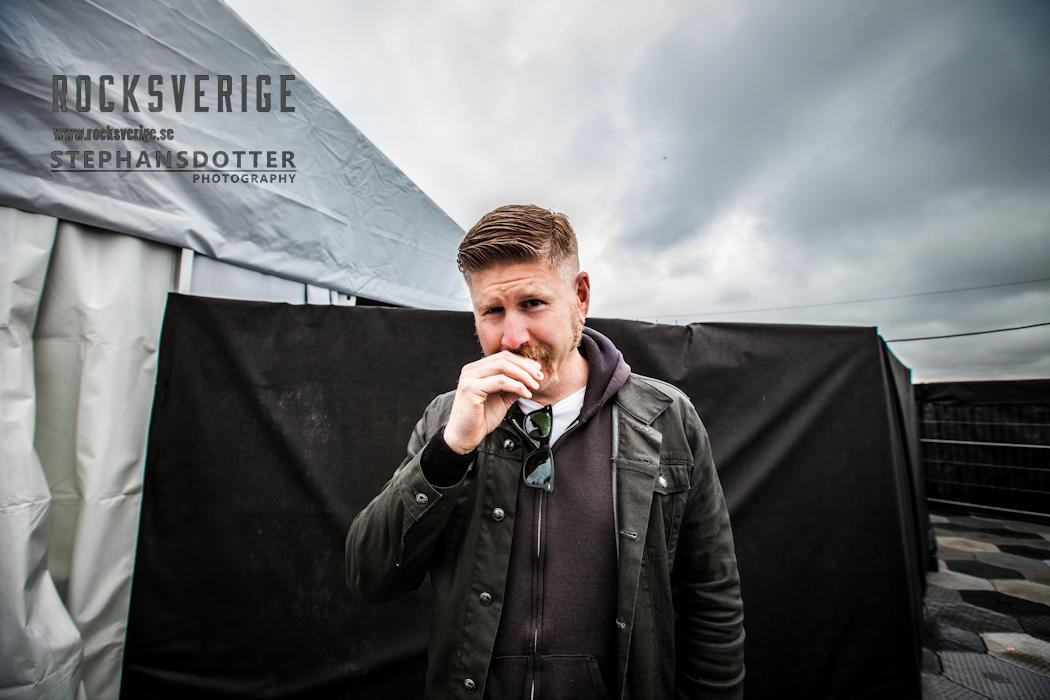 “Recently I just had to admit to myself, because I can´t just have one or two, I have to have all the beers and all the booze. That´s part of life and this is what it has come to. It´s ok. I´ve already drank enough to party for a million people, so I can take the time off.”

How do you feel about the album ”Once more ´round the sun” now that it´s been out a while?

Bill: I think it´s great! Ever since we were writing all those songs, I always knew it was gonna be a great record. I just feel it. It´s a different direction and I had a big hand in it and I was writing like mad. I just felt that if I´m putting all this effort into it, it´s gonna be good.

Have you always felt like that about an album?

Bill: No. Usually the songs sound good, but I´m always blown away when we get into the studio and they actually come to life. When the vocals hit them, that´s like; “Wow!” With this record, my recording skills have gotten better and I have a little studio and I was able to get a sneak peak of how it was gonna sound, because we were recording all the time and I was recording everyone doing their vocal part, so I was staying up all night pro tooling it and switching vocals and stuff around so I could hear it in different ways. I could kinda hear how it was gonna sound. Are you already now putting pieces together for the next one?

Bill: We´re always writing and I always have my laptop with me and I always plug my guitar into it. That happens almost every day and I try to write some stuff. Little pieces every day, so yeah! I wouldn´t say full on writing mode yet, but definitely thinking about the future.

When you play live in the US, is there any city that kinda stands out as being more fun or crazy?

Bill: I don´t know really. It´s fun to play in Atlanta when we´re on stage because we´re home. We have a really big following back home which is great, it´s just dealing with the dressing room afterwards. Everybody´s family is there and all the friends and hangers on and people drinking our beer. It´s a madhouse! We had like 350 people backstage last time we played there and I was like; “Get me outta here! I don´t wanna be here.” When we play LA and New York it´s like that. We just have friends all over the country and all over the world too.

Are there days, when you really don´t feel like getting up on stage and if so, how do you overcome that feeling?

Bill: I just feel that playing in a band is something that isn´t a given, I just have to do it. There is no “I don´t feel like it tonight.” It just doesn´t happen. There´s no choice, you have to play. You can´t just wake up one day and decide, unless it´s an emergency, that you don´t wanna play. I´ve been really sick on stage and I´ve seen Brann really sick on stage and if he can do it, I have no right to say no if I don´t feel good. We had one or two shows where Brent had thrush on his throat and he was like; “I can´t do it. I need a rest.”, but no, I don´t ever feel it. I mean there are days where you feel like you wanna go home, but I also wanna play the show. Sometimes I have a nap in the day and I´m not drinking, so I never feel hung over and even when I was drinking and every day you´d be hung over, but once you get up there, things change. It´s only an hour and 20 minutes. Is it hard to stop drinking?

Bill: Yeah, definitely! Recently I just had to admit to myself, because I can´t just have one or two, I have to have all the beers and all the booze. That´s part of life and this is what it has come to. It´s ok. I´ve already drank enough to party for a million people, so I can take the time off.

Is it a lasting thing?

Bill: I don´t know? I´ll probably never drink again, because the more I go without it, the better I feel and I feel I don´t need it. I can hang out with people who are drinking and I´m not, but it´s hard because I´m like; “You´re really annoying! I gotta go.” Then I realize that´s how I am. Stinking of booze and saying the same shit over and over again. And I´m getting older too.

Who came up with the “twerking” video for “The motherload”?

Bill: It was the band. We live in Atlanta where there´s a big black community, more so than white people, so there´s a lot of hip hop artists there and a lot of black clubs, strip clubs and thee´s a lot of twerking going on. We kinda see it in all the advertisements and commercials and stuff and we thought; “Wouldn´t it be funny or wouldn´t it be kinda humorous or different to have twerkers in our video? No one would expect that.” We just thought it would be a cool way to fuck with people, I guess. Did you realize that it was gonna stir up some emotions?

Bill: Not really. We don´t think about other people, we just think what would be cool and weird? A lot of fans have really small minds, I think. Not our fans, but just people in general. They´re like; “You can´t mix those two things!” and we´re like; “C´mon, get over it!” We´re not that serious, we´re just human beings.

One of the girls in the video wrote about it and defended it, but she still got a lot of flak for it.

Bill: If we were all black dudes and they were dancing, it would be fine, but because we´re white and they´re black… if it would have been white girls, it probably would have been ok, but because they´re black girls people go; “You´re racists!” We´re not racists! They´re girls and that´s what they do for a fucking living! They do that and they get paid to do it, no matter if they´re doing it in our video or if they´re just doing it at work. What´s the difference if we use them in our video? How is that racist? I don´t get it.

Do you have any favorite albums from 2014?

Bill: No. I haven´t listened to a lot. I´m so busy and it´s hard to keep track of what happening. I´m wrapped up in my own world when I´m on tour and when I get home, do I wanna sit down and listen to music? No.

Have you heard Opeth´s new one?

Bill: No and I need to hear that. I always have records on my list of what I need to listen to when I have a minute, but I just don´t have a minute. When I go to bed, I put my headphones on and go in my bunk and put on Led Zeppelin or this band called Metric or Clutch and I was listening to At The Gates the other day. Not the new one though. I don´t know, I´m such an old man. Just the other day, I took my phone and I don´t even know how to download from iTunes to my phone anymore. I´ve updated my iTunes so many times and you used to just drag and drop and now I´ve erased everything on it. What did I do wrong? Why can´t I just drag and drop? I put like 20 albums on there. I put in David Bowie, Clutch, Led Zeppelin and Soundgarden and I was like; “Nah, I don´t wanna hear any of this stuff! I should listen to some new stuff.”, so I should´ve put the new At The Gates and Opeth in there. Maybe I´ll do that tonight. Bill: We´ve got a US tour and a Grammy nomination. We have a Japanese tour coming up and a headlining tour of Australia, finally. We´re also doing New Zealand and maybe Hawaii. We´ve got some work ahead of us.

When do you think you´ll start working on a new album?

Bill: I don´t know. I wanna get something out as soon as we can, really. It´s hard to wait so long and tour with the same songs. It gets old. I´m not sick of playing the songs, but it would be great with some new ones. We still have a couple of new ones from the album we still haven´t played live yet, so we´ll work on those for the next tour. We have summer and we´re gonna be touring and you can´t really write a record then, so it might not be until next winter. Who knows, just the other day we talked about it and Troy said; “Why don´t we just cancel summer and do another record?” We have a lot of ideas, really good ideas, but I wanna have a ton of ideas. We have a few songs left over from the last record, so those will definitely be a start.