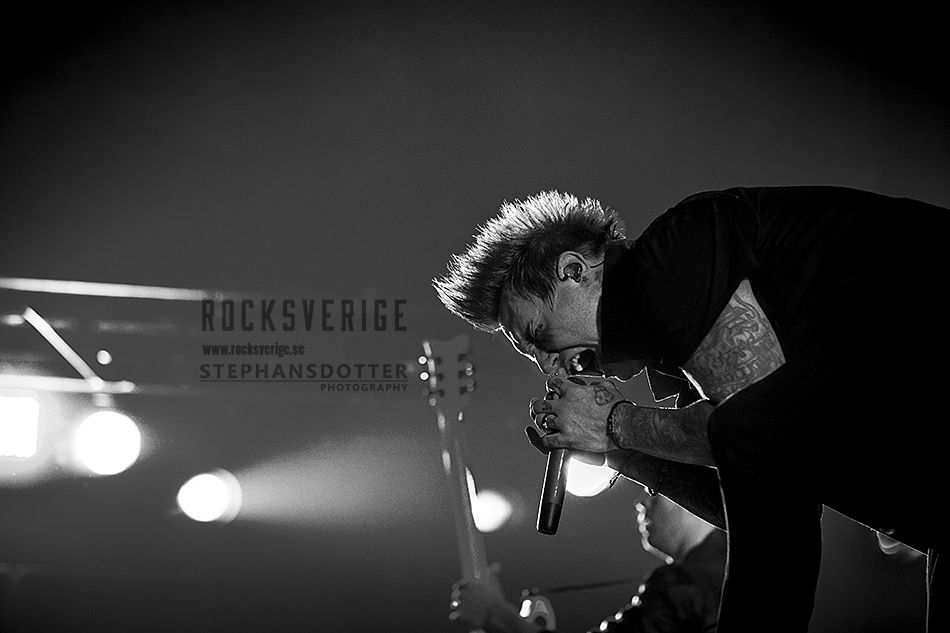 I really just focused on the party and the lifestyle. Now I look back at that and go “Dude, we fuckin´blew through so much money!”, but whatever! It was a fuckin´ good time, so it is what it is.

After all these years, what do you know today that you wish you´d known back when you started out?

Jacoby: Man, I wish I could be able to go back and tell myself a few things, like “Hey, watch out for this!”, but the young me would look at the older me and go “Fuck you, dude! I´ve got this.” I had way too much ego and I was not humble enough to listen to anybody when I was younger, so I really had to just learn how to burn in the fire to become stronger. That´s just my personality. Maybe I´d tell me to pay attention to your business more. I really just focused on the party and the lifestyle. Now I look back at that and go “Dude, we fuckin´blew through so much money!”, but whatever! It was a fuckin´ good time, so it is what it is.

It seems like every single band has gone through a lot of hardships with money and contracts an so on. Has it been the same for you guys?

Jacoby: Oh yeah, there was definitely a lot of that! We had very irresponsible people around us, just spending stupid amounts of money on whatever the fuck they wanted. We got a reality check back in 2008. We went through and did an audit on everything and really looked at everything and went “Oh my fuckin´god! What happened, dude?” We were not in touch with that and here´s a quote from David Bowie, “To become a better artist, I had to become a better businessman.”. If your business affairs are in order, then you can just focus on your art and not let your business motivate your art. That made a lot of sense to me. It was like “Alright, get this in order so it works and get people that are watching that.” I´ll peak in and make sure everything´s good once in a while and then I can really focus on being creative and the fun side of music. Biggie Smalls said it too, “Mo money, mo problems!” But it´s still fun, 20 years later.

The city you´re from, Vacaville, is that a small place?

Jacoby: It´s a small town, around 100.000 people and there´s not much going on there. It´s a very quiet town and that´s essentially why we started Papa Roach, was to fuckin´ have something to do. We started putting on our own shows, garage parties, keg parties, backyard parties and we would play anywhere and everywhere. Eventually as we started to catch on, we started going doing shows in Sacramento. We would go watch the Deftones play a lot. We would see them at their local scene and go “Fuck, they´re killing it! We can go do this!”. We started opening shows for Deftones in northern California, which was awesome for us. They were a big influence on us. We moved to Sacramento, but we were never really accepted into the Sacramento music scene. They were always going “Who are these weirdos from Vacaville?” We´ve always kinda been that band and it´s kinda been true to this day. We became part of the nu metal scene, but we always had a little bit of a punk edge to our music and our live show. The recklessness that not all of the nu metal bands had and we didn´t kinda fully identify with it, but we didn´t identify with mainstream rock either. We´ve always kinda been like the bastard son to every bill that we´ve been on. Like Papa Roach and In Flames doesn´t really make sense, but fuck it! Gimme a mic and a stage and let us go rip it and let us be who we are! I think we learned that from bands like Deftones or Faith No More or even going back in history to bands like Led Zeppelin. Within their sound they had a lot of different sounds and we express that in our music.

Did you realize early on that a rock and roller was what you were gonna be?

Jacoby: Yeah, I knew it very young. I was like 17 years old and “This is it! I´m not going to college, I don´t like school, I don´t like athourity. I like living my life my way on my terms, when I wanna do it, why I wanna do it, because I wanna do it.” Music gave me that opportunity. I can´t say that I was a very talented singer and I can´t necessarily say that I am right now (laughs), but I´ve got this thing inside my soul that just burns, man. A lot of us look at our lives for a purpose and for some reason I just feel that God blessed me with this gift and going out on stage and just rippin´it. I found my purpose very young.

Was there ever a time during these 20 years, where you felt that you would like to go back to school?

Jacoby: Not necessarily go back to school, but sometimes I have that feeling of like “Is this really my true calling in life? Is this it? Is this my life?”, but I find that every time I have that question and anytime I´m going through that, I´ll always find a reason why rock and roll is the purpose and the reason. It definitely has reaffirmed in these last couple of years, because I´ve had a hard time in my personal life, that music is just a very important tool for me personally but then also to a lot of our fans as well. I feel like we have a responsibility to them at this point in our career, to just keep going. The fire rages on inside myself and every time I got it, there´s always five more reasons to why I should stick to it.

What´s it like being a dad and being out on the road for several weeks at a time?

Jacoby: It sure is difficult for me. I´ve got three boys, 12, 10 and a one year old. That´s one of my biggest internal struggles in my personal life, missing a lot of those key moments and being able to sit down with my son. He just had a girlfriend. I´m like, “Oh my god, my son is 12 and he has a girlfriend! He´s too young!” Her mom called us and said they had to split up and we had to tell our son, “You´re not allowed to have a girlfriend.” And he was in tears. I wanted to be able to be there and have that conversation face to face with my son and just let him cry on my shoulder for a minute, “It´s alright bud! There´s plenty of time for girls in the future.” (laughs) I struggle with that, but thank God for technology! I can Skype and facetime with him. I have conversations with my kids regularly when I´m home, quality conversations in depth and not just like “Hey son, let´s go throw a ball!” I´ve asked my kids a couple of times, “Do you resent me?” and they´re like “What´s resent?” and I go, “Are you made at me that I´m gone on the road? And they say “We´re not mad at you, we just get sad sometimes.” Now I´m ok with that, because every family has their personal struggle and thank God mine, that´s our struggle. I can think of far worse struggles, so we´re doing alright.

When it comes to albums, is the latest one always the best one?

Jacoby. Always! (laughs) It´s an extension of who we are creatively and it´s not just me. It´s a collaboration between me and my brothers and we take time to create this piece of art together. We step back and look at it and we´re very proud of this new record. But then also, it´s just a snapshot in time. In music and in art, it´s just a moment. That´s what´s beautiful about creating art, it´s just about capturing a moment or a feeling or an emotion and when it´s done you move on.

Are you always writing songs or do you have to sit down and specifically go “Now it´s time to write a bunch of new songs!”?

Jacoby: With this last record, that´s exactly how I did it. I didn´t write anything on the road when I was out touring. I was just very focused on keeping my head right. It was the first time I´d been out on tour, from the beginning of the tour to the end of the tour, sober so I just really focused a lot of my energy on that. Then I came home and it was time to write a record and I was like “Oh shit!”. I went to Vegas and I didn´t have anything written. I just showed up and was like “Let´s do this!” and it was interesting, because I was frightened of it, but suddenly inside of me, it was just like a flood gate opened and every day I came to the studio with a new thought or a new idea or a new feeling about what I should write about. It was the fastest record I´ve ever written. I think that just me showing up with a clear head, gave me that opportunity.

Does it ever happen that you come up with stuff, just to realize “Shit, we already did that!”?

Jacoby: Yes, definitely! There are moments like that on every record. We wrote this song for the new record and I heard it and I was like, “It just sounds like we´re trying to write Last resort all over again.”. The demo track was called “Next resort”. We never put it out, but it was a fun excercis in writing music, but that´s the thing, when you´re writing music or creating, nobody else is listening. It´s us four in a studio or in a room creating and that´s just ultimate, total freedom. We can do stuff and go “Oh man, that´s real funky, but I don´t think it fits the record but it´s fun to write. When my drummer and my bass player set up and they´re jamming, they´re always playing some funk tunes, some old school 70´s funk and it´s cool for them to be able to express that musically, but in Papa Roach that´s not us.

Jacoby: Yeah, a couple of times. I was young, he was young and we were both partying on that tour and we had some ragers. I remember this one night, we had a video camera with us and we were all fuckin´ high on ecstacy and we were fuckin´drunk. We were on everything and it was me, my drummer Dave, Eminem, his wife at the time and one of his wife´s friends and the rapper Xzibit, and we had like a WWF wrestling event in the dressing room. Eminem was hitting me with a fuckin´chair and we go back and watch that video and go “Man, we were fuckin´young and wild!” Backyard wrestling with Eminem in the dressing room. There´s a video of it but we haven´t put it out yet. Those were the days, and nights!