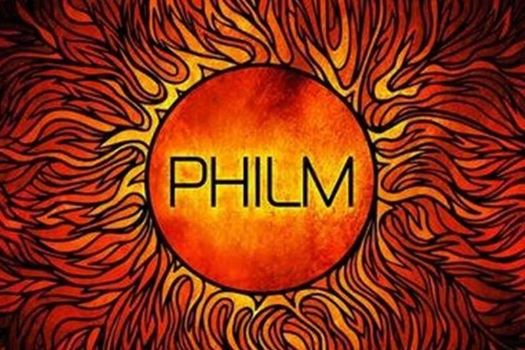 I answer this fucking question and next thing you know, Blabbermouth is all “He doesn´t see himself playing Slayer songs ever again!” and out of the entire fucking interview, that one fucking line is taken. I´m not answering it! I´m not gonna answer it because I´m fucking sick and tired of it. No offense towards you, but it´s just so redundant. But you know what? Good press, bad press, I don´t give a fuck! Just spell my name right! (laughs)

Do you consider Philm your main band now?

Dave: Yes, it´s my main band and my focus. I might venture off and do another project, but it´s not something that´s gonna take me away from Philm at this point. This is my focus right now. I´m not only playing the drums, I´m also producing it and I´m very much part of the songwriting.

Is the new Philm album “Fire from the evening sun” something you´ve been working on for a long time?

Dave: Well, the first Philm album was released in 2012 and during the recording of that album we were continuing the songwriting, so we were writing songs upon the completion of that album. We finished it and kept writing and recorded this album in April/May 2013 and the reason for the delay is because we´re going through mangers, or I should call them damagers, that wouldn´t do anything for the band, except halt the release of the album. We finally took control of our career and our lives and here we are, ready to release it and we´re excited.

How much touring are you guys gonna do with this album?

Dave: We´re playing four shows in Europe, total. We were late in booking shows and you need like maybe five months to book shows. We´re focusing on hopefully getting an opening slot or possibly just waiting to do another tour later in this year or next year. I wanna tour as much as I can and I really wanna show the fans this new band. I have a couple of really talented musicians that are very capable of holding their own. I think it´s very important to have that kind of musicianship. It´s heavy at times and it´s diverse, it´s got a lot of peaks and valleys.

Do you see yourself doing a bunch of different projects in the future?

Dave: I never know what´s gonna come my way and the door is always open. Right now I think Philm is my focus, but if something comes along and someone goes “Hey, you wanna record some music?”, I´ll obviously take it into consideration, but I don´t see myself straying too far from Philm. I´m part of the songwriting and I did produce these two albums. It´s a very creative outlet and not only the drums, but the tones and the sounds.

I spoke to Mike Portnoy a few weeks ago and he said that since leaving Dream Theater, he feels a lot more musically satisfied. Do you feel the same way, not being part of a bigger band? Does it open up a lot of new oppertunitues?

Dave: Absolutely! You´re not part of this machine that has to go on tour 90 days or 100 days out of the year, to pay for other peoples´mortages. With this, you´re doing it for yourself and it´s creativity based on what you like. You express yourself in many different ways and it´s definitely more satisfying and challenging too. You´re not with the same guys and the same formula and you´re challenged by walking into a room with these new artists and it´s like “Ok, how am I gonna make this work?” It´s great and I agree with Mike! It´s a whole different light when you´re out of your elements. Isn´t it a bit more uncertain, in a way?

About Slayer, can you pinpoint a time when it became more business than camaraderie?

Dave: Well, I think I realized that it became more business when we signed with Def Jam. We signed to a major label and they were asking us for our social security numbers and we had accountants and we were appointed a manager. It changed, it definitely changed, but that´s normal if you´re gonna work at that level. You need these people to help the machine grow.

Looking back, there´s gotta be a favorite Slayer album of yours?

Dave: I have two favorites. The first one obviously, which I can´t argue with everybody, is “Reign in blood”. That is the most amazing album and one of the most amazing albums I´ve ever recorded and been a part of. The second one is “World painted blood” and the reason why is because the band was working collectively in the rehearsal studio and Jeff was part of it. He really wasn´t too much a part of “Christ illusion”, although he was there, but I don´t think the amount of songs that he contributed were enough to make that album one of the better ones. With “World painted blood”, he was part of that and I remember being in rehearsal and him being a big part of structuring and telling me “Try this, Dave!” and “Gimme some of that and gimme some of this!” Giving me ideas. Those two really stand out. “World painted blood” was our last big push.

How do you feel about never playing Slayer songs again? Can you see yourself not doing that?

Dave: Ehhmm… ok, here we go! I answer this fucking question and next thing you know, Blabbermouth is all “He doesn´t see himself playing Slayer songs ever again!” and out of the entire fucking interview, that one fucking line is taken. I´m not answering it! I´m not gonna answer it because I´m fucking sick and tired it. No offense towards you, but it´s just so redundant. But you know what? Good press, bad press, I don´t give a fuck! Just spell my name right! (laughs) It´s all good, but I don´t wanna get into that. (Cymbal from the recordings of “Reign in blood”)

Is there another musician that you´d really wanna work with musically?

Dave: Many! Trent Reznor´s amazing! He´s an amazing artist and his songwriting is phenomenal. Jack White is coming up with some amazing stuff and there´s a jazz pianist named Chucho Valdés from Cuba. He´s phenomenal! I don´t necessarily have to work together with them and create something, just sit in a room and jam. There´s a lot of different musicians, but unfortunately some are dead. Tito Puente (1923-2000), the percussionist, I would have loved to have him set up his kit and just jam and see the connections that we´d make. But I´m also playing with musicians that I did dream about, like Bill Laswell (basist, producent) and John Zorn (multiinstrumentalist) and an artist that I never thought of working with, but I have, is Mike Patton. That´s amazing, to be part of the albums they´ve created. I´m very honored and I look forward to the future and who knows what it has for me? I´m open to everything.

Could there ever be another Fantomas album?

A guy like Reznor then, can´t you just call him up and say “Hey Trent, let´s do something!”?

Dave: (laughs) No, I´m not that kinda guy. If it happens… the ball is in their court and people know who I am. They´re all involved in their own projects and if the opportunity arises, I´m sure it´ll happen. But I don´t do that. It´s kinda unprofessional to do that.

Dave: Shit, you´re the second person to remind me! I don´t feel 50. I feel like… I don´t know? I forget what I felt like at 25 or 30. I remember feeling shitty most of the time and I would get fucked up sometimes. I feel great now and I feel like there´s more to come. Damn, 50? Fuck, that sucks! (laughs) Damnit! I feel like I could play forever. Who knows? I could be 80 years old and still be on stage.

Has the playing gotten harder over the years?

Dave: You know, it´s really odd and who knows what´s gonna happen in the future, but right now dude, I feel great! I´m counting my blessings and I´m not changing what I´m doing. I´m eating as healthy as I can, I try to walk as much as I can and exercise, I drink a lot of water and a lot of juices. You don´t abuse yourself, although I drink every now and then and I do get fucked up, but it´s not every fucking day! It´s not “Alright, shot!”. That just takes a toll on your body and I´m very grateful that I´ve kept that to a minimum. I can still fit in my jeans and I can still wear a medium t-shirt (laughs), so I´m very grateful and I don´t have any problems with my joints, whereas there are a lot of drummers that I´ve heard, that do. But again, what have you´ve been doing the past ten years, bro? Have you been drinking water or are you drinking alcohol instead of water? Alcohol drains you of your fluids. I learned many, many years ago that it isn´t a good thing.

Has there ever been a musical project or band that you´ve regretted turning down?

Dave: No! Well, Ozzy asked me to play for him once, like in 2005 or something. I don´t remember exactly. Mike Bordin was drumming for the band at the time and he asked me if I wanted to take his place. I heard the songs he was playing and I don´t know? I can´t see myself playing “No more tears”. (laughs) Believe me, I love Ozzy and I love Black Sabbath, but I just couldn´t. It´s not really my thing, but who knows what the future brings? If that came to me now, it might be a different story, but back then I was in my avant-garde/industrial world and I was into different styles of music and that just wasn´t a style that I really cared to dabble in.

Well, next year when you turn 50, you might be in Ozzy´s band?