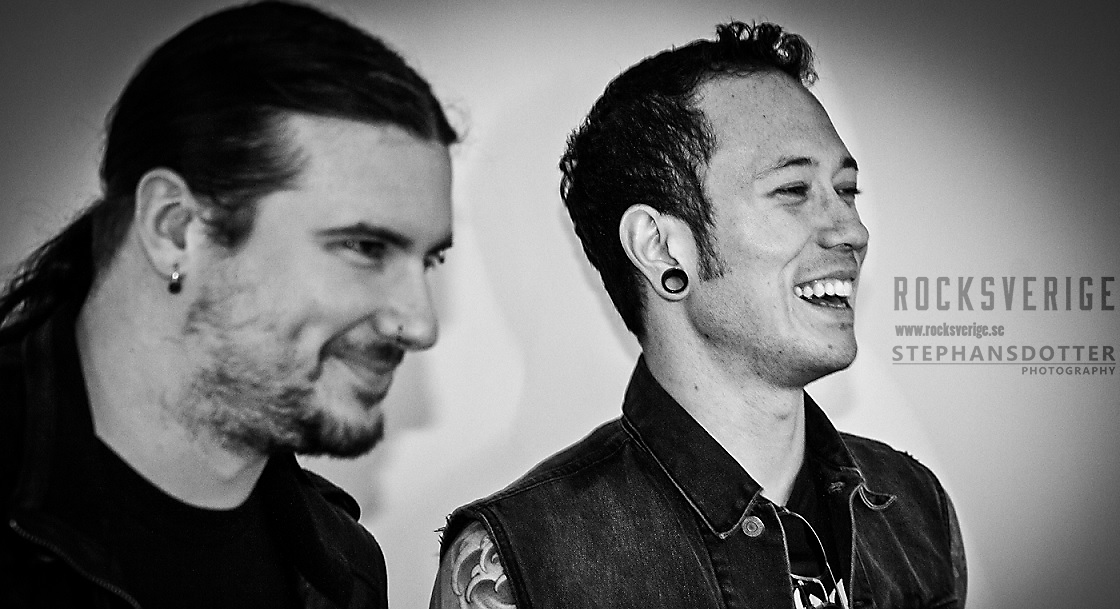 It’s almost a year since you released your record, do you got plans for a new one?

We have been writing in between the touring. We have a lot of material by now, a whole bunch of riffs and ideas. We just need a good amount of time of tour to get the record together and finalize what direction this album are going to go.

What will separate this material from your last record, Vengeance Falls?

It’s hard to say without the vocals on it yet. One thing we will definitely do again is having seven strings guitars on some of the songs. We have been messing around with different tunings and I think that the next record will have a multiply tunings. Trivium does not have any limitations anymore, so we are just going to throw in any idea that we have.

We got so much material right now so we won’t know the vibe of it until we are starting to make songs out of the material really. But from where we are right know, I think we have have some really interesting songs in the making. Some songs are in the base of the process and I think that we are ready to kick them into songs in the end of this year. We won’t be touring at all next year to focus 100% on the album.

Do you have any thoughts on who is going to produce the album?

Nothing’s set in stone yet but there is someone that’s kind of our number one wish on our wish list and he’s definitely interested, but it all just depends on timing and everything. Hopefully everything works out and we get to work with him, because I think everyone in the band wants to.

I guess it’s to early for a name then?

I don’t want to jump the gun before anything is official or anything. While writing a new record, what’s the most important thing to think of?

We have always been a guitar drifted band, so we focus on the instrumental parts first and then add the vocals. I do really think that the most important thing is to be mindful of every part of the song and make sure you don’t leave any stones unturned. It’s important to be aware of the song and write riffs that fits and that people wants to hear on the festivals.

So your songs are made to play live?

I think it’s a bit of both. I mean, we have some stuff on the records that do don’t necessarily have to play live, but we have never been that band that has to have tracks or computers on stage to pull of what we do.

Earlier this year you announced the departure of Nick, can you tell me about that?

It was just a situation that we all realized wouldn’t work out long term anymore. It have already been four years and we felt like if thing’s doesn’t feel 100% by now, they never will. The only way I can describe it right now is if you ever had any sort of relationship with someone and you come to that point in the relationship when it’s not working, you have the choice to end it there or prolong things and let it run into more problems.

We are very thankful that we had a back up plan that we really didn’t were aware of and that was Matt, our drum tech that now plays drums for us as well. Matt have been with us for two years and we didn’t know that he would be able to step in and play the music.

How much did you practice with Matt before tour?

We had 24 hours and it was during the tour. We told Matt a Sunday afternoon and the Monday after he was playing with us. We were on tour with Volbeat and they knew about the situation, so they gave us all their soundcheck time so we were able to run through the whole set with Matt before we went on stage. It was nice to be able to play the songs once before we went on stage together.

Is there any thoughts on keep playing with Matt?

We are just trying to take everything slow at the moment, the first prior is the tour. After tour, we are going to try to think out were we are going to go. We didn’t want to pressure him to the position like ”You are the drummer now and here is all the stuff you got to do.”