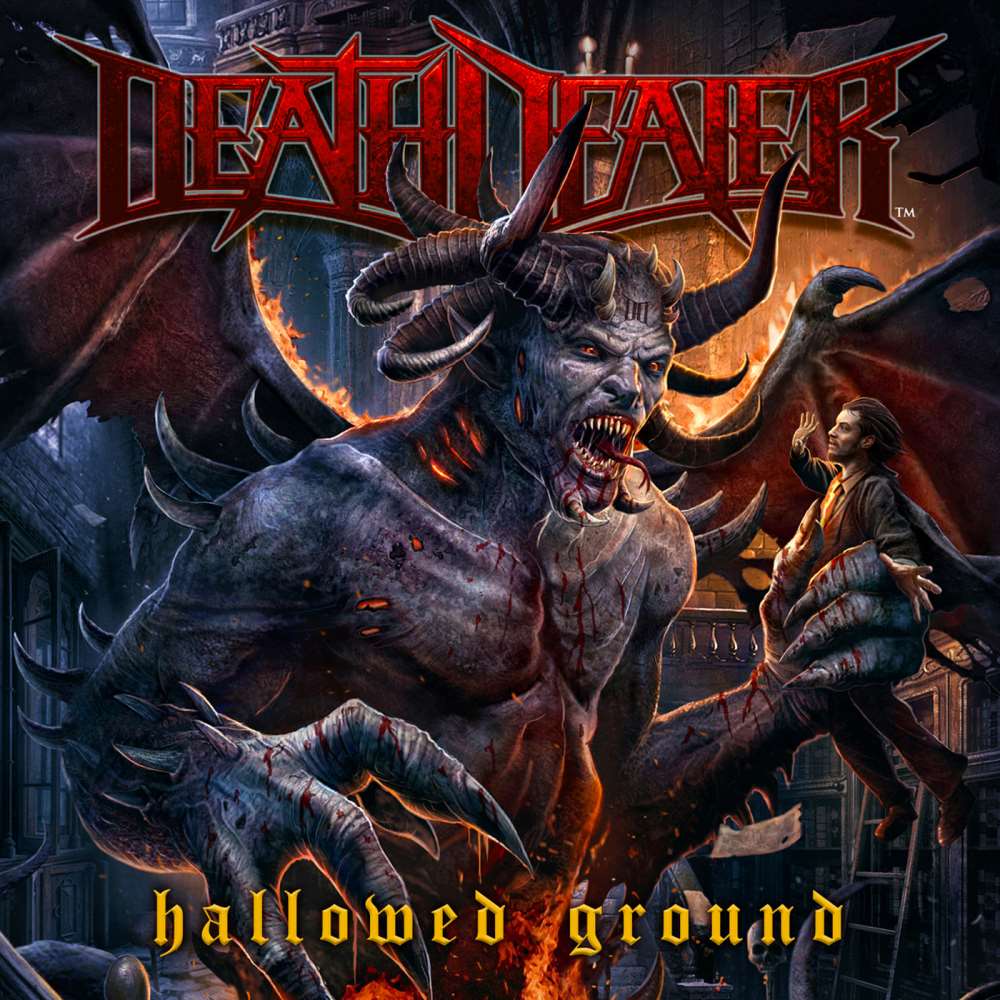 “Time goes by for everybody. As long as you live a good life and you don´t hurt people and you help people and do the right thing, it´s all good. I´ve never hurt anyone in this business and I never will. I could´ve done better financially if I did, like some other people that I´m not gonna mention. I have a clean conscience and I live a good life and I think it shows.”

Ross: Well, I would say that it´s a process of song writing maturation. I think our songs are a little deeper on this one and we have more power metal and my style on it. It´s very satisfying to listen to the whole thing.

How do you feel your own song writing has developed over the years and does it get harder coming up with stuff?

Ross: That´s a good question. With song writing and getting older, I think it´s harder. There are times where the songs just flow out of me and I´m just floored and it´s the best thing ever. Then there are other times where it doesn´t come as easy, but you can´t push it. Songs are like gifts. With Death Dealer though, we have a lot of song writers and really prolific at this point and honestly more prolific than I am at this point. When we work on songs, it´s really fun and satisfying. For me, watching the songs come to life and then finishing them and putting the finishing touches on them and it comes out and people really love it, that´s the most satisfying thing for me in the music business, as well as playing live. It´s a good feeling. How did you end up on a Swedish label (Sweden Music Group)?

Ross: Our manager found SMG. He knew a lot of the guys and placed us with them and all of a sudden they fell in love with us. They figured out very smartly that this record have the potential of really crushing it. They said “We´re putting our money on you. With a band like you and a live band like you, you can definitely make it.” The right label found the right band at the right time with the right record. It´s hard in 2015. If you look at all the bands that get anywhere, it´s the big bands and all the bands from the 80´s. Nothing else seems to be moving the needle, but we´re gonna move the needle, because they have a guy from the 80´s in the band. (laughs) There is that 70´s and 80´s thing in Death Dealer and we can do it. I actually believe it. The more people that see us, the more people that love us. Like the Motörboat Cruise (Sep 28-Oct 2), it was very successful for us.

Ross: It was a drunken orgy. All metal and all different people. You had thrash and Motörhead, Hatebreed and Suicidal Tendencies, the hardcore stuff and then us. It was great, it was really great. They made 3 million dollars in booze sales for four days. You can´t make this up. Someone asked me “How much do you think the boat sold on booze?” and I go “Well, it had to be a lot. Maybe $500.000?” and I thought I was high, but no. These metal cruises, they love it and it´s a windfall of profits for the boat company. They love every second of it. There were no fights and everybody says hello and everybody loves each other. I´m not a fan of every band, but there´s common ground for a lot of heavy metal and it´s growing around the world.

Did you get to hang out with any of the other bands?

Ross: Yeah, we all said hi and everything. Lemmy has to be taken care of all the time. He has to be looked after, but they´re awesome and we love them. I know the guys from Anthrax. I produced their first single (Soldiers of metal 1983) and I did Metal Allstars with Joey Belladonna. Slayer I never saw, but that´s cool. We met a lot of fans and people came up to us going “Finally! I´ve been waiting for a band like this for years. You´re like Judas Priest on steroids, but you´re not Judas Priest.” Death Dealer is the highest energy metal band I´ve ever seen and we give 150% on stage. We´re like a freight train.

I read somewhere recently, that a lot of the songs were written via file sharing. Would a band like this been possible back in the day, since you´re all over the Place?

Ross: Right, Stu is in Sydney, Australia, three are in LA and I´m in New York City so it would´ve been impossible. The bad things about the music business, like file sharing and such, has given rise to Death Dealer. Stu has this template so we can create demos that sound almost like our records. It gives us all a head start on song writing, which is incredible. We have taken advantage of the internet and we make it work for us. I don´t think anybody could deny our first two records.

What about The Dictators then? Are there any plans for new music?

Ross: We have. We have a brand new single and it´s called “Supply and demand”, with a B-side. I wrote the music and Mr Manitoba wrote the lyrics. We´re thinking about an album, but we´re not in any rush. The fact that we have a single without Andy, is a big move for us and it bodes well for us. Dick and I live in the city together and we have one or two song writing sessions a week and it´s a great feeling. A lot of ideas and by the way, we´re reissuing “Go girl crazy” (1975). Andrew WK has remixed three songs. 40 years later I´m getting the last laugh. My favorite is actually “Bloodbrothers” (1978).

Ross: I like it and I think it´s fantastic. It´s live in the studio, no overdubs except for the keyboards on “I stand tall” and it´s just testimonial of where the band was at the time. We had been through some records and we didn´t know what the fuck to d and we just went “What the fuck, let´s go and make this record.” and it was very satisfying.

Where did the name Ross the Boss come from?

Ross: It was when I was a kid and it had to do with baseball, which I love. My family owns a batting cage. We were playing and it was a choose up game and my buddy Robbie said “Choose Ross, he´s the boss!” and that stuck with me and for The Dictators we all picked other names and I just took Ross the Boss. Sometimes I really don´t like it and sometimes I like it. I guess I was born to be that.

What´s the difference writing music for Death Dealer and writing for The Dictators?

Ross: Nothing. People ask me how I can switch genres like that, but I just say it´s the same. A good song is a good song. I feel the same way about it. You know what riff belongs where and I´m always trying to come up with riffs for both bands. There´s no difference. It just comes.

What does Manowar mean to you these days and what´s your take on Manowar these days?

Ross: These days? Well, it´s kinda disappointing. After I was asked to leave, the musical output is… listen, I´m not gonna put down their music, but what I don´t like, is the reissuing of the old records and the rerecording of the old records without me on it. Especially “Battle hymns” (1982), that was my record and it was my record deal, my A&R guy that signed us to EMI. It just didn´t go over, but as far as the other records… the fans like them and that´s great. Is Manowar still a steady income for you these days?

Ross: Yeah, pretty much. I still have my royalties for the songs I wrote, but I have to say that I got the raw end of that deal. The band really broke after I did all the heavy lifting.

What does New York mean to you these days?

Ross: Well, it´s not like it was. It´s been gentrified and it´s expensive to live here. Manhattan is a disaster. All the rock places are gone and the bigger venues are owned by the bigger corporations. Brooklyn´s got some really great stuff going on. I was just in a great studio doing a session and it´s getting turned into apartments. It´s typical.

Do you get nostalgic of the good old days?

Ross: Yes I do. It´s not the same anymore. The badness has been taken out of it and believe me, there was some bad things about it back in the 70´s, a little dangerous. It was a dangerous place to be.

Have you ever thought about writing a book?

Did you ever cross paths with KISS back in the day.

Ross: Of course. At one point there was only three bands that had contracts in the city, it was the New York Dolls, KISS and The Dictators. There was no other place to play but this place in sunny side Queens called The Coventry. We played there with New York Dolls. One side was their side and the other was our side. A crazy night. Our crowd wasn´t really digging their crowd, I can tell you that. All of a sudden the city opened up and clubs started opening up. KISS blew up and we went on tour with them and that didn´t last long. (laughs) What´s a high point and a low point in your career so far?

Ross: A high point? I don´t know. I guess The Dictators first record and actually getting signed. Someone actually signed a bunch of knuckleheads from the Bronx. (laughs) Creating Manowar and starting another genre. A low point? Probably getting dropped (The Dictators) and then we picked ourselves up again and kept going. I had a band called The Spinatras and we made a really good record (@Midnight.com 1999) and two weeks after the record came out, the record company got sold. And this after they gave us a bunch of money, like $100.000. It didn´t matter back then. There are highs and lows. I´ve made 30 records, so there´s a lot of highs and lows. That´s just the things are. I´m just glad to be here and I truly believe in Death Dealer. I really think it´s the best metal band right now. It´s a fresh take. No one´s inventing the wheel anymore, but I can tell you this, these songs are fresh, they´re exciting, they´re rock and roll and they have edge and that´s what sets it apart.

How do you feel about getting old in the rock and roll business?

Ross: I think about it at every birthday. (laughs) There´s probably nothing we can do about that. A lot of artists feel they have to hide it and have to knock off five years of their age. My birthday is out there. I have nothing to hide. No shame. Time goes by for everybody. As long as you live a good life and you don´t hurt people and you help people and do the right thing, it´s all good. I´ve never hurt anyone in this business and I never will. I could´ve done better financially if I did, like some other people that I´m not gonna mention. I have a clean conscience and I live a good life and I think it shows.