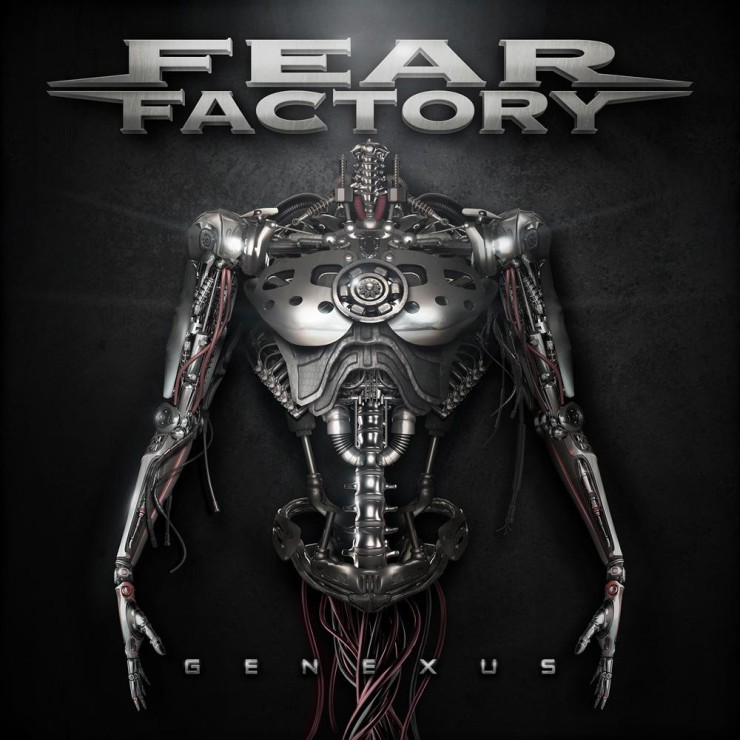 “We´re making a comic book first. (laughs) We´re working on that right now. It´ll be a series. It´s a smaller company working on it right now. Burton wrote the whole story for it.”

About the new album, as I understand it, it´s the past and the future of Fear Factory all mixed together and it´s also about man turning into machines and vice versa, correct?

Dino: (laughs) Correct. Basically what this record is based upon, is one word, and that´s “Genexus”. “Genexus” is two words put together – genesis and nexus – and it´s basically a hybrid. The word describes the next transition in evolution as man moves forward to a more mechanical state of being. Obviously where humans are machines and machines are human and where just talking about the evolution of where we are going as a society and how technology plays a very big role in our day to day life and how that progresses into how intelligent or how human like it becomes. The robotic evolution is the next step. In the movie “Ex machina” (2015) a guy makes a woman that is a machine on the inside. That´s the next step and that´s basically what we´re talking about.

It´s kinda sounds like “Terminator” and “Maximum overdrive”, that old Stephen King movie AC/DC did the soundtrack for?

Dino: (laughs) Yeah. “Maximum overdrive” was a funny movie. “Terminator” was more of a war against the machines and this is not necessarily a war. We are kinda embracing the technology. We are creating robots now, that are smart as humans, if not smarter and they will get smarter, but if the technology ends up in the wrong hands, then it turns into war, like in “Terminator”. It´s kinda scary to think about AI and robots starting to think for themselves and have emotions.

Dino: It´s just where we´re at right now and it can get worse or it can get better. This particular album is about the hybrid and musically we wanted to go that way too. Obviously our music has been a hybrid from the get go, from the heavy to the melodic. With our drums in particular, on this record, we used acoustic drums and sampled tones, so definitely a hybrid.

The word “Genexus”, is that a word you came up with?

Dino: The word doesn´t exist. I actually looked it up recently and it´s some pharmaceutical company or something like that. When I first looked it up, there was nothing. It´s a word we came up with. Genesis of course being the beginning and nexus is things coming together and that´s where we talk about machines being human and humans being machines. People might think it´s a dumb concept and go “Yeah, I´ve seen Terminator.”, but when you really think about it, the technology is really creeping up on us and it has become the norm. You once again worked with Rhys Fulber (producer). What is it that he brings to the table?

Dino: Way back in the day when we first started in 1990 and did our first record, we always had a thirst for technology, but back then we didn´t have Pro Tools and a lot of things. We were doing things very organically and trying to emulate a machine as best we could. In 1992 we did a remix album with Rhys and he had state of the art technology back then. He had all of the different samplers, he had an old Atari computer and so on. He had the technology that we didn´t have and he brought it to Fear Factory and thing we wanted but couldn´t afford, he brought it and that´s when the hybrid came about. Some call it cyber metal, some call it industrial metal and you can call it what you want, but he brought in the electronic element that we wanted and were thriving for. We embraced it and have used it ever since. He´s been an integral part of the band since day one, almost. Then we chose Andy Sneap to mix the record, which is more of the organic side of it. We chose him because we know what he can do and we thought it was a great choice for us, just to create a certain tone and vibe that we were going for and I believe he was able to achieve that.

With technology and the type of metal you play, does it sometimes get hard to know when to stop? To know when a song is done and not to mess with it anymore?

Dino: Yes, it does at times get difficult to say “enough is enough”. You´ve tweaked it as much as you can, but if you walk away from it a little while and then come back, you can go “Oh, I can change this.” These days you can do that instantly and sometimes you ruin songs that way. You over tweak them, but we have been doing it for a long time now, so we pretty much know when to leave it alone and when it´s great.

How did Deen Castronovo (Journey) end up on the album?

Dino: (laughs) Interesting, right? Obviously people know that he´s the drummer in Journey and he´s a great vocalist as well. That started back in 1995 when Burton C Bell did a project with Geezer Butler (Black Sabbath) called GZR and Deen was the drummer in that band. We´ve been friends of his and he would come out to Fear Factory shows and come watch us play and his been a fan ever since. We were thinking of people to play on our album on one song and he said “Hell yeah, I´ll do it!” and that´s how it happened. He´s playing on the song “Soul hacker”.

It must´ve been a bit different playing on one of your songs, compared to the stuff he does with Journey, which is a lot softer?

Dino: (laughs) Yeah, a lot softer, but he´s a longtime friend and it was so cool to have him on there and it worked really well. He´s a great drummer and his done a lot of other stuff, but it´s nowhere near as popular as Journey. Speaking of songs, I wonder a bit about the song “Church of execution”?

Dino: Burton likes to throw in old religious things. On the album “Mechanize” (2010) there was a song called “Christploitation” and it´s about the exploitation of Jesus Christ. On this one… the record is more about an actual autobot, a robot, and this type of the Genexus model robot witnesses the daily lives of pure humans and he realizes that there is this insanity known as religion. As the machine gets smarter and smarter, he realizes that religion is an infection and that religion is infused in humans to maintain control. Does that make sense?

Yes. You could make this into a movie?

Dino: We´re making a comic book first. (laughs) We´re working on that right now. It´ll be a series. It´s a smaller company working on it right now. Burton wrote the whole story for it, but unfortunately it won´t tie in with the album because it won´t be done by then.

You´ve played with a lot of cool bands over the years. Is there like one tour that stands out as being more fun than others?

Dino: There are so many. On one of our early tours back in the day we toured with Sepultura in 1994. Before that we toured with Sick of it all and Biohazard. A lot of memories from that tour. One of the biggest tours we´ve done was with Metallica in Europe and Australia and Japan. A whole different level of touring and a whole different lifestyle that we´d never seen. They treated us exceptionally well. You got out there and they had the stage in the round and there were people all the way around you and that was like “Oh my god!” The minute I hit the stage, I was like a fish in a fish bowl. Everywhere you turned, there were thousands of people. You´re used to a stage where you´re looking forward, not looking around, so it was a whole different ball game. We got to hang out with all of them and they´re very, very cool guys. What are your memories of your first album “Soul of a new machine” (1992) and how do you look at that album today?

Dino: I look at that album today and I´m like “Wow!” I can hear where we wanted to go and I can feel what we wanted to do and what we were trying to achieve, but didn´t exactly achieve. We achieved it on “Demanufacture” (1995) and that´s when we realized that this is what we wanted to do on “Soul of a new machine”. We got signed to Roadrunner Records right away and I still see “Soul of a new machine” as our development stage and it´s a big part of our history. Death metal meets industrial with melodic vocals on it. It was different and we got ridiculed by a lot of grindcore and death metal people, because of the melodic vocals, but we felt that that was the one thing that set us apart. For me it was definitely a learning experience in how the media is and how tough the media is. I learned that on that first record. We were just happy to play and go on tour and go to Europe and play the Dynamo Festival. It was our dreams coming true. We were naïve and it wasn´t until three years of touring on that first album, that we matured and went “Ok, this is the real world.” It was hard and the touring lifestyle is not for everybody. You just sink or swim and for us it was like “Fuck yeah!” and we embraced it.

How long did it take before you actually started making a living off of this?

Dino: Well, it took several years of course. Our drummer was living with his parents and Burton was living with me and we were seven guys in a one bedroom apartment, so we paid very little rent. I´d say we really didn´t make a living until “Obsolete” (1998). We were all able to afford our own places, but still weren´t making a lot of money. First time we signed a contract to put out a record, we were kids and we didn´t realize that the record company made all the money. We appreciated the opportunity and they were able to launch us into the world, but again, we were naïve. Because of the success of “Demanufacture” we were able to renegotiate our contract, but it wasn´t until “Obsolete” that we saw an actual income from the record company. Obviously the band was still growing and they did support us by giving us tour support, but all that money was to pay for the bus, the crew and all that stuff. We were opening up for Megadeth for $200 a night. That´s what we had to do. Some people get lucky and don´t have to do that and some bands have to work their way up and we were one of those bands. With “Obsolete” we were able to headline our own tours and that´s when we started seeing some financial success. We were actually getting paid a few thousand dollars for a show. We were excited.