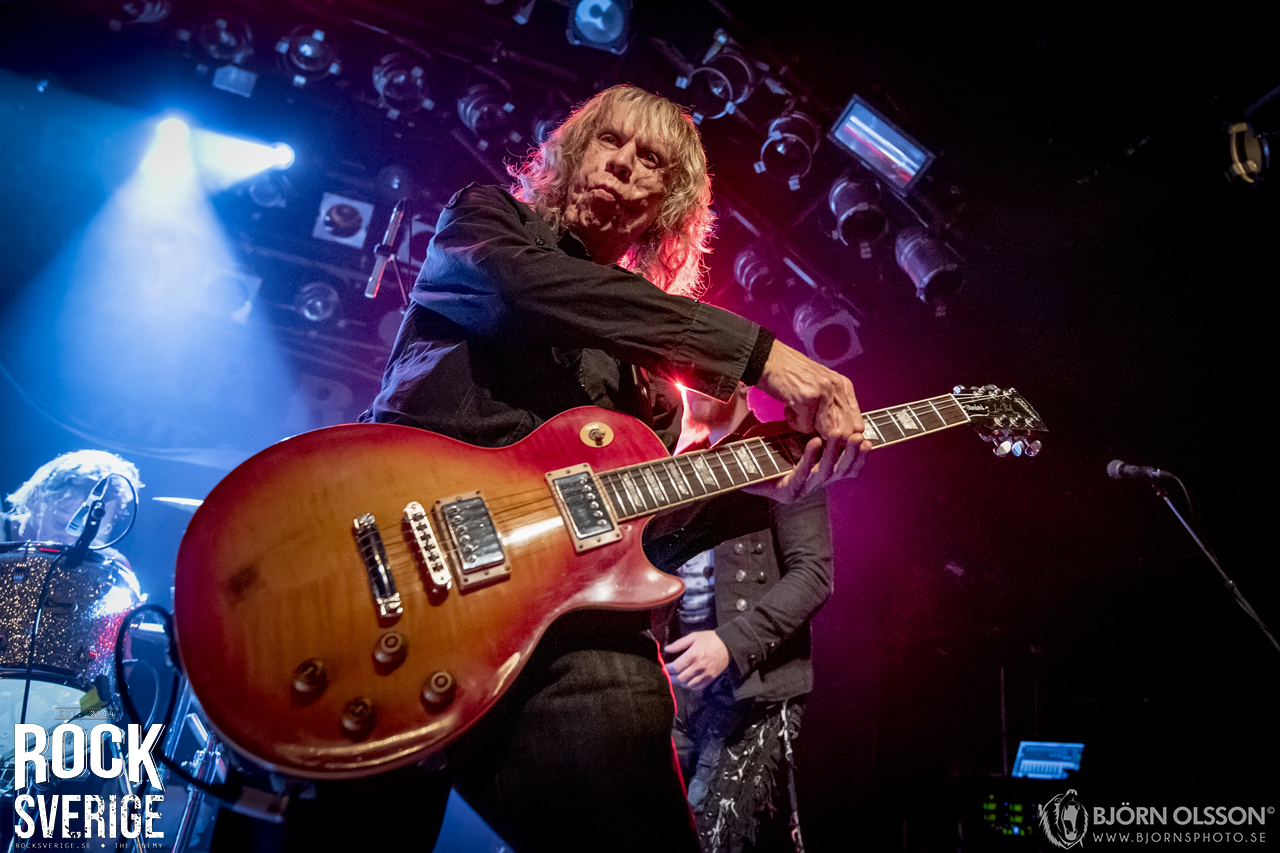 – As soon as I grabbed hold of what he was doing I tried to work it into a song and fortunately it went into “Am I evil” so that´s good. There´s a nice little bit of tapping in it. Very influential.

Eddie Van Halen passed away recently. I read an old interview where you picked 10 records that really meant something to you and the first Van Halen album was one of them. You also mentioned that you saw them in ´78 and ´84.

That´s right. What an incredible guitarist and what an incredible legacy he left, influencing thousands and thousands of guitarists. I saw them twice and they were absolutely brilliant. He was on fire Eddie was. Everybody wanted to be able to play like Eddie and it just blew my mind, like “How is he doing that? How does he get that sound?” Even a song like “Ain´t talking about love” where he´s kind of picking an A minor chord and yet it sounds incredible. We aspired to be able to play with that much feel and energy. A song like “Panama” is just a master class in rhythm guitar playing.

Yes, I´d heard it in a record shop first of all. I saw it in a record shop in Dudley browsing through the albums and they put on “Eruption” and of course I just went “What the…! How do you do that?” I remember chatting to somebody and saying “Hey, how does he do that?” and somebody said “I think he goes… (hums) and he taps with his finger.” I said “Ok, let´s have a go at that.” and as soon as I´d learned to do it, I got it into “Am I evil” and the solo in “Am I evil” and the intro is a bit “Van Halenish” As soon as I grabbed hold of what he was doing I tried to work it into a song and fortunately it went into “Am I evil” so that´s good. There´s a nice little bit of tapping in it. Very influential.

Scott Gorham told me a funny story about Thin Lizzy seeing Van Halen open up for Black Sabbath in Detroit in 78, I think it was. He was standing there with Gary Moore next to him and they watched Van Halen play and he said Gary was there for about three songs and then he disappeared. Apparently he went straight back to the hotel and practiced tapping all night. Next day at soundcheck Gary was tapping away.

Wow! Exactly, soak it up! There´s a new kid in town! (laughs)

“Lightning to the nations 2020” How did you go about picking the cover songs on the album?

I wanted to do covers. I think it´s a fine tradition of bands doing covers and I wanted to do a Metallica song. I went straight to the debut album (Kill ém all) because I thought “Well, Metallica have covered songs from our debut album, so I wanna do the same and do a song from their debut album.” I listened through the tracks and I think Diamond Head´s influence on Metallica is perhaps strongest on “Kill ém all” and there was something about “No remorse” that felt slightly Diamond Head in the writing anyway. We played it in rehearsal and I got everybody to learn the song and when we played it fitted and it did sound almost like a Diamond Head song. We didn´t have to work on it too much, it just felt really, really right. Then we´ve got “Immigrant song” A song that I´ve been a huge fan of since it came out in ´70. I´ve always wanted to write a song like “Immigrant song” and I think it´s probably one of the first songs that I ever heard where the drums, the bass and the guitar all play exactly the same part. It´s so original and I´ve never quite managed to come up with anything to match it, but I thought it´d be great… you know, we´ve got such a great singer in the band and I thought “If he´s able to do a Zeppelin song and  Judas Priest song and a Deep Purple song, we should definitely do it.” I picked one I really liked, probably not realizing that it´s quite difficult vocally. Ras didn´t blink and he just nailed it. The same with “Sinner” I´ve been a huge fan since that one came out in ´75. I love that album “Sin after sin” and I love the album before that as well, “Sad wings of destiny”. I think that´s just a brilliant album. We settled on “Sinner” after trying a couple of other Priest songs and discussing like “Island of domination” and “Tyrant” and “Rock forever”, but it´s such a statement. It´s such a big song and I think the arrangement is amazing. I said “Ok, let´s learn it! It´s quite a tricky one, but let´s learn it and see if we can do it justice.” We did and it sounds great. Then with “Rat bat blue”, it´s more of a deep cut and not so many people know it. None in the band knew it and I wanted to pick one that was not on “Machine head” and I tried to find one that didn´t feature keyboards too much, that have that Jon Lord keyboard sound that´s such a massive part of Deep Purple. I thought “Well, we don´t have a keyboard player, we have two guitar players, so let´s find something that is riffing and Blackmore playing his great riffs.” and I thought “Let´s try Rat bat blue.” Again, everybody learned it and tried it at rehearsal and it sounded great. Share a bit of love. A more obscure track rather than a big hit.

You doing “Sinner” actually made me go back and listen to that album, which I hadn´t listened to for a long time. It´s such a great song. With a band like Judas Priest, did you know, during the 80´s, that Rob Halford was gay?

No, not until he came out. No, not at all and it never occurred to me. We didn´t know about Freddie Mercury either, did we? So, until they actually came out and then “Ok, I didn´t realize.” I´ve got no idea, but then again, it´s not something I think about. I might be a bit more attuned to it now, but at the time when I was 18 or whatever, I was just into music and didn´t have a clue. (laughs)

A band like Led Zeppelin, was that a band you got to see?

I did see them once and only once unfortunately, at Knebworth. They did two consecutive weekends in August ´79 and we went to the first one. It was just fantastic and the biggest gig I´d ever been to. They got these giant video screens so you could see. It was huge. They were so big, pretty much the biggest band in the world at that point and I had been really looking forward to seeing them. Then Bonham died the following year, so I never got a chance again.

During the years, have you ever come across any of the Zeppelin guys?

I´ve met Robert Plant a few times, because he lives locally. He only lives a few miles away. He´s our local hero. I´ve met Plant probably four times. In fact, there´s a pub I drink in, within walking distance, my local, and he drinks in there sometimes. Sometimes you could be sat there talking to your mate and Robert Plant walks in. (laughs) And it´s like “Oh my god!”

Of course. I met Jimmy Page and I was almost flabbergasted. I thought “I know what to say.” and I still got all my words mixed up. You feel like you´ve got your one chance to try and convey how important their music has been to your life for 3o years or something and you get it all mumbled and mixed up. And also running through your head is that “They´ve heard all this before. Leave it.” But you have to take your moments.

When was the last time you met the little Danish guy (Lars Ulrich)?

(laughs) I spoke to him on a Zoom call about three weeks ago, which was great. We had probably about an hour catching up on things. But about a year ago or two years ago, Metallica played Manchester City football ground and I went to that and it was fantastic. It rained and they didn´t have a cover on, they were out in the open so they got soaked, but of course they´ve got radio mics and nobody got electrocuted. You could see as Lars went round the drums and the toms, the water was splashing up all over. They just played on and it was fantastic.

How was Lars and what was it like catching up again?

Great! He´s a good talker, isn´t he and he always puts me at ease. He´s got a good sense of humor, so it was great. I´ve known him now for nearly years. He knows all about me and I know all about him. I´ve stayed with him a few times and he of course stayed at my house when he initially came over in 1981. We have a bond.

When you go out with a guy like Lars, does he pick up the tab?

(laughs) He has done.

With the pandemic and all, have you guys been writing for a new album?

Yes, I have. Unfortunately, we can´t get together. I´ve said to everybody “Let´s take the opportunity to write songs.” I´ve fortunately got a little studio and I´ve got Pro Tools LEV(?) guitar that I´ve had since 2006.  Everything we had planned this year got cancelled or postponed, so the most constructive thing I can do is to write songs for the next album. I´ve been trying to do a bit each day, working on song ideas, and I think I´ve got some great ideas.

I´ve never done that yet. We pretty much keep the lineup as it is. I kind of don´t want to tread on toes too much really. I don´t think anybody thinks they´re comfortable doing that. I think that was then and I kind of leave that alone. Also, they probably wouldn´t do it. Our bass player Colin (Kimberley), I´m still friends with Colin and Duncan (Scott). Colin doesn´t play anymore. When he quit Diamond Head in 1983, he sold all his gear and he´s never played in a band since. If you asked him to play bass now, he probably would say no. Duncan doesn´t play anymore and he had a stroke about two and a half years ago and it affected his right hand and his right arm, so he would probably struggle to play the drums unfortunately. We´re still friends and we go out for a curry now and then which is great, because you´ve got so much in common. That´s it.

Yes. I´ve had some health issues and I´m 60 now and if anything´s going to stop Diamond Head, it´s going to be health at some point. I enjoy it while it´s here, It´s terrible that we can´t play this year, like loads of other bands. It just crosses my mind. I try to be more careful and I try to exercise and eat well. I´ve never been a big drinker fortunately. I do like a drink, but… you know… moderation. I don´t smoke, so hopefully I´ve got a few more years left. A friend of mine died today so it happens and I´m totally aware that mortality is just out there. I´m not taking things for granted.