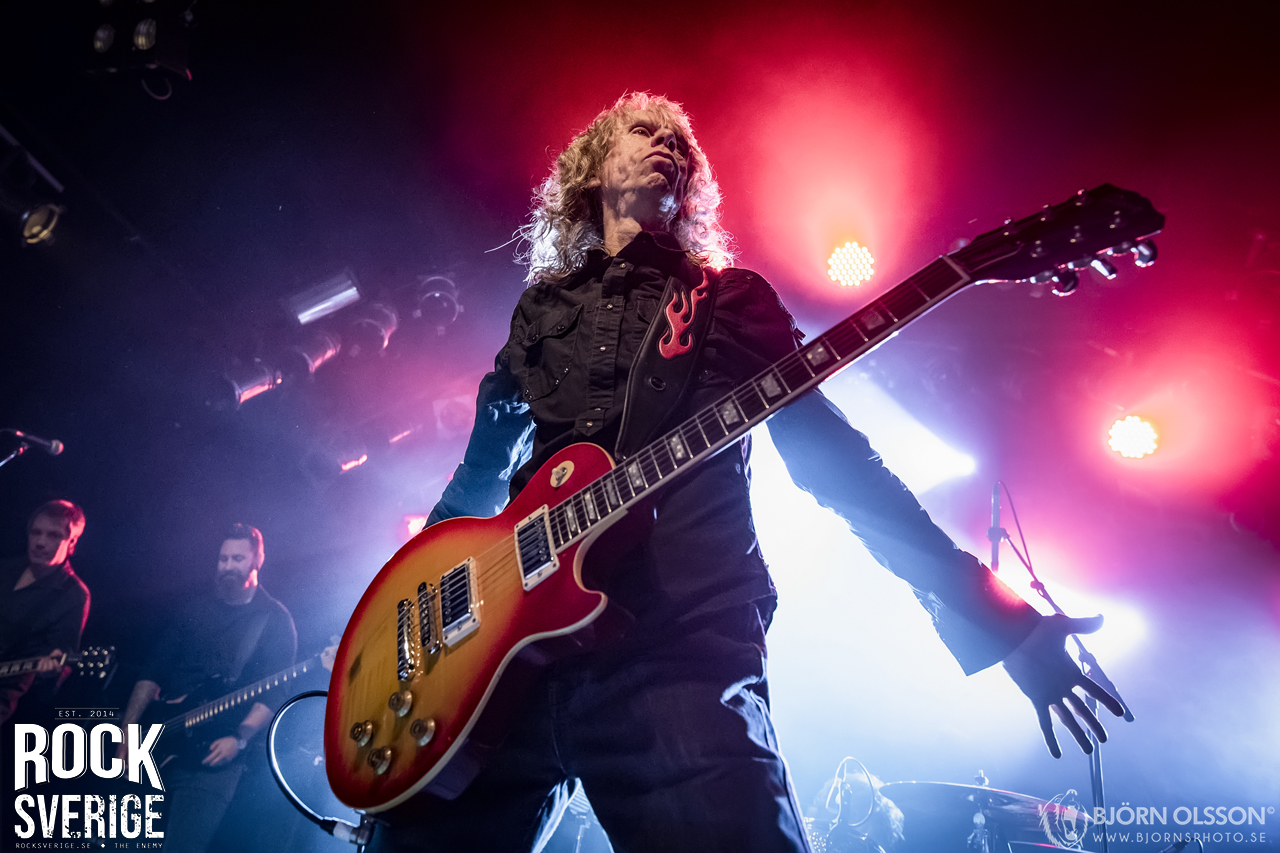 “It´s my biggest source of income. It´s great and I don´t know what I would do without it. It gives me the freedom to do what I like. I´m very grateful.

Funny thing I thought of when I shook your hand, is that some guitar players I´ve met have started doing fist bumps the last couple of years, instead of shaking hands. I think Scott Ian told me about some big guy almost crushing his hand at a M&G.

But the thing is, the left hand is the thing that… so the right hand is not as vital, but I´ve had that big guy doing that. But I don´t really like the fist bump either.

Your hands, in a way, is your livelihood. Is that something you think about while working on the house at home for instance?

Yeah, I do! I´ll be careful if I´m using maybe a saw or something, but I do cut the hedge. I´ve got a hedge trimmer. I´m just careful. I also do warmups and a lot of times my left hand won´t make a fist, but if I warm up properly, doing exercises, it comes back. Fortunately. I´ve got a little bit of arthritis in my little fingers, but it doesn´t really trouble me and that´s all at the moment.

Now that the album´s been out for a while, how do you feel about it?

I´m still really pleased. You never know if people will like it, but mostly people say it´s great and the love Ras as a singer and it still sounds a bit like Diamond Head, but it´s a bit more modern. I mean, if we were a new band now, we´d be using more modern technology, so rather than saying no and strictly be old school, “We´re gonna use analog tape!”, we just go with the flow. Technology wise we use Pro Tools and plug ins. There´s so much stuff available now. In 40 years production has changed massively. Still, everything starts with a guitar riff. I make home demos and then we work on the songs and Ras will come up with lyrics. I think the sound of guitars has changed and the amps have more gain available. It´s all sorts of things you can do now. Right up to the mix you can change the sounds of everything.

Do you have ideas for another album?

Not at the moment. I mean, I´ve done more demos and I´ve got some ideas I quite like, but at the moment we´re into touring and we´ve got an idea for something we´re going to do next year, but I don´t want to tell everybody what it is. We´ve begun work on it and we´ll just see. Next year is the 40th anniversary of “Lightning to the nations” so it would be nice to do something around that and maybe do the whole album live. We did it in 2010 and that seemed to work, it´s seven good songs in a row. It would be nice to make a bit more of it this time.

I listened to it today and it´s fascinating how it didn´t go on and sell a lot more copies than it did. You had all these bands coming out of England around that time and that album is just as good as any.

It is a strange thing and as you can imagine I´ve racked my brain a thousand times and discussed it with people for years and years. I can´t understand how we made that record in a week, recorded and mixed in a week. It´s got great songs like “Am I evil” etc. Our manager took it to labels in the UK and no one was interested. We did a pressing of a 1000 and that sold out and then we did another 1000 and I really think that deflated us a bit. We liked the record and we thought we´d made a good record and yet Iron Maiden got signed, Angel Witch, Saxon, Girlschool. We seemed to be watching bands get signed and no one would sign Diamond Head and we were really frustrated and we sort of turned on ourselves a little and kind of thought “We obviously need to write the perfect song.” and we had written the perfect song, but no one quite realized it. I mean, if we would´ve been snapped up by EMI, things might have been different. We struggled for a bit. Then we kind of evolved away from the metal thing and kind of pursued and tried to more fit into… a bit more Zeppelin, a bit more chord based and melody based. It was a funny time. In an ideal world, with the benefit of hindsight, we would just have played more of the same thing, realizing this is where it´s at. Who knew metal was going to be around for 50 years? I certainly didn´t. It felt underground in 1979. It was our tribe, but it didn´t feel like there would be huge festivals all over the world dedicated purely to metal.

Is ”Am I evil” your greatest song?

I think so. I´m very proud of it. Every time we play it, it goes down well. It doesn´t matter if we play in in a little pub in South Wales of Sonisphere. It got something. It´s very hard to replicate and I don´t know what it is, but it just works. It´s a great riff, it´s a great chorus, great lyrics… I don´t know? It´s just one in a million. I´ve come up with a lot of songs, but nothing quite touches that.

Lemmy wrote in “White line fever” (2002) that he was actually sick and tired of playing “Ace of spades” You´ve never felt that with “Am I evil”?

No, I appreciate it and I´m really glad. I love it! We save it to the end of the set and I know if it´s going well, by the time we get to “Am I evil”, it´s gonna be mad, they´ll go berserk. It´s lovely to have that up your sleeve. If you mention Diamond Head to anyone, they´re probably gonna know “Am I evil” and they might know the Metallica connection and then you´re home. (laughs)

About Metallica? Do you remember the first royalty payment you got from them?

Yeah and I think it was early 90´s, like 1990. We were in the red at first with our publisher. Diamond Head didn´t sell any records so we never really recouped on our advance. We split in ´85 so there was nothing happening. There was a publishing issue where our old publisher had some of the songs, like “It´s electric”, “Helpless”, “Sucking my love” etc and it took me a bit of time to get away from him. When we signed to MCA we also signed to Zomba publishing and they were saying all the money was coming in, but it´s going to our management, so it wasn´t coming to me. I had to get a solicitor involved and do the homework and in the end they had to get Zomba to split the payments so my share would come to me, which makes perfect sense, and Sean´s share to him. Then it went into the black and started creeping up. Of course they (Metallica) hadn´t sold that many records. In ´87 they did “Helpless” on “Garage days re-revisited” At one point Lars was helping me. He asked “Are you getting your royalties?” and I said “No, not really.” and he gave me a lawyer to contact and said “Speak to this guy at Elektra!” He put me in touch with people and he was determined that I would get my due and he did help in any way he could. It did take a bit of time, but it came eventually and it´s never stopped flowing ever since.

They played those songs early on. You get money from live performances as well don´t you?

That´s PRS and at one point I wasn´t in PRS. I think I joined in 1988 and I should´ve joined years ago, but nobody told me about it. Our management didn´t know what it was, so I had to find out for myself really. Maybe I spoke to a couple of people, possibly Lars, and they said “Do you remember PRS?” and in the end I joined myself, so the money did start flowing, yes. If Metallica performed it live at the NEC or something, then I would notice and get a statement and it would say “Live performance” It took a little bit of time for it to come through. I made it my mission in the late 80´s when Diamond Head wasn´t happening and I didn´t have much of an income.

Is it decent money? Could you possibly live on it?

It is. Yeah, I do. It´s my biggest source of income. It´s great and I don´t know what I would do without it. It gives me the freedom to do what I like. I´m very grateful.

It´s fascinating, the whole business deal of it. When you start a band, I guess you don´t think of all that and you just learn it along the way?

You learn the hard way, really. I didn´t understand what publishing was. We all signed away our publishing to our management and it took a little bit of time to get it back, because we didn´t know what we were doing. We were young, sweet and innocent. I always thought you become a big band like Deep Purple or something, or you split up and disappear and go back to your day job. I didn´t realize there´s a middle ground, where we´re at, where you can make a living and I didn´t realize about royalties and publishing and PRS. All of that took years for me to figure out bit by bit. It all got sorted, but I had no clue in the early days and our management, haven´t never done it before and weren´t really music business people, didn´t advise me so I signed crap deals. But I´m not the only person to signs crap deals.

Going back a bit. When you started out playing, who were one of the first musical heroes you got to meet?

I was a big AC/DC fan and we got to support them.

Yes. That was fantastic, to play with AC/DC. It was Bon´s last gigs. Then I met Michael Schenker, a guitar hero of mine. Years and years later, I met Jimmy Page at the O2, so I´ve met a few of my heroes. I´ve never met Ritchie Blackmore and I love Blackmore. He´s the one that got away.

Do you feel you´re in a good place today?

Yes. It´s a great band and it´s nice to be back out on tour. We´ve got some nice things planned for next year and we´ve already agreed to play Bloodstock. We´re constantly looking for support slots and tours and festivals. People are liking the album. I think we´re only doing one song tonight, but this is only the third gig and we´re still getting into the swing of playing to the Black Star Riders audience. We´re a bit heavier, so we don´t want to pound them too hard. For the first show we were really late. There was a lorry accident on the bridge and we were stuck in traffic for four hours and we were very late to the venue. They let us go on and we just did four songs. We just quickly the gear on, didn´t change and Rus didn´t use his in ears or anything, but at least we got to play and I think the crowd liked it. They watched us set up because they were all in there and then we kind of gave a nod and went “1 2 3 4!” and off we went.