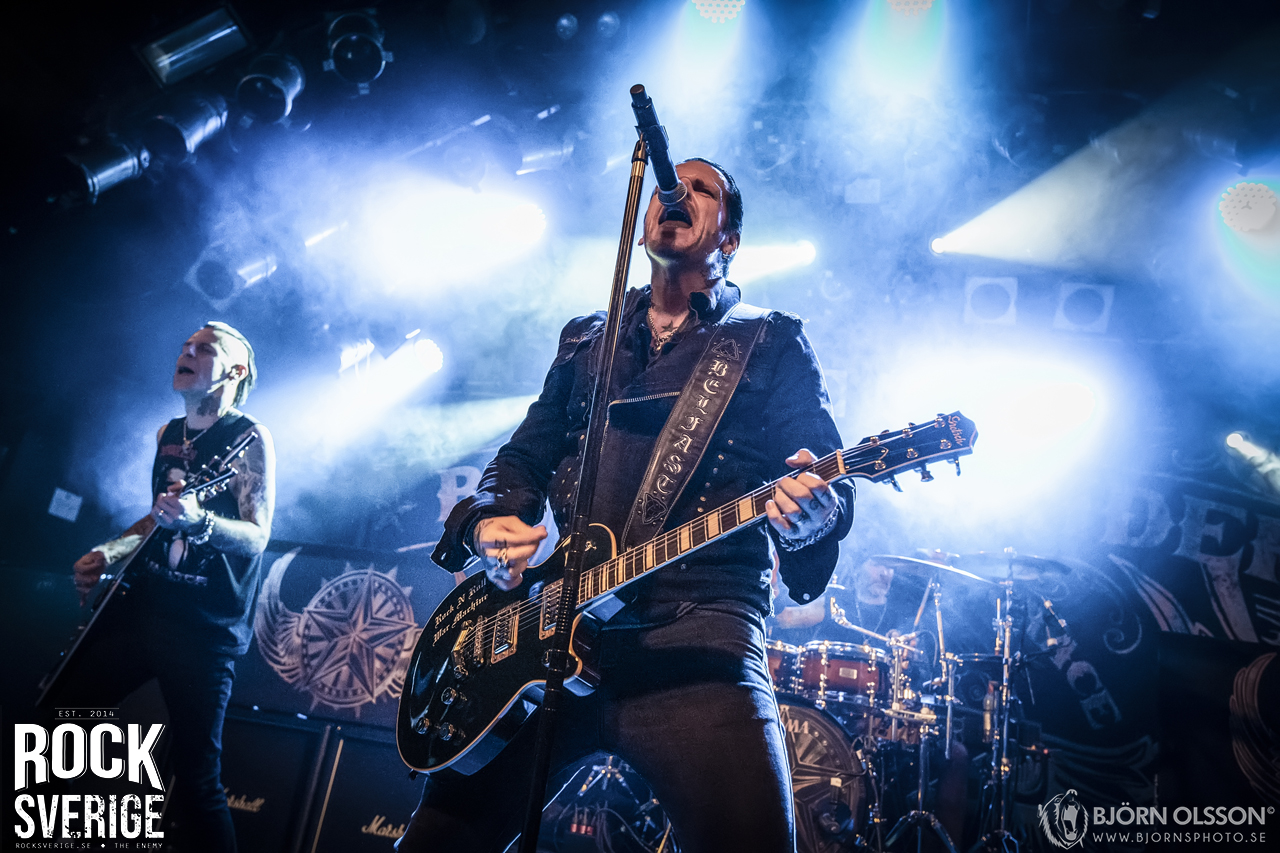 Who was the last musician you met that´s been a hero of yours?

That´s a good question. I meet Scott Gorham every day, but that´s too obvious. A really good question. I´ve met so many. I think I´ve met almost all of my heroes. Going back to Lemmy. I think he had a very profound effect on me at the age I was at the time and I learned a lot from him, you know, because he was so different. The minute he was Lemmy, he was Lemmy and I think that was like “Alright, that´s how you do it!” I think he´s probably the guy that had the most profound effect on me. Joe (Elliot) is a really good friend of mine and he´s a hero too. I value his opinion and I will call him to get his opinion on something and he always tells me the truth and that´s why I call him. He´s been an amazing supporter of mine for the last 25 years.

Does he tell the brutal truth?

Oh god yes! Joe won´t sugarcoat anything. If it´s shit he will tell you it´s shit or “Why did you do that? I saw something on YouTube and you were singing out of key. What are you doing?” and it´s great because you need to hear that sometimes. And if it´s good he will tell you it´s good. I like that, so I trust Joe. I don´t have any brothers so he´s like a big brother to me.

Since I thought Robbie (Crane) was going to join us and he worked with Poison when he was 15, I´m wondering what you were doing at that age?

Same thing. I was born on a small farm so it was already decided that I was going to be a farmer. I left school when I was 16 and started working on the farm straight away and I fucking hated it. I wanted to be a soccer player but I wasn´t quite good enough and I loved music as much as I loved soccer, so I was already starting little bands. Then there was a band from Glasgow called the Kissing Bandits and it´s similar to Robbie´s story, they´d just signed a major record deal and my sister knew the keyboard player. He said “Is your brother into music? We need someone to come and hump gear, put strings on guitars and so on. There´s no pay and he has to sleep on the floor of the hotel rooms.” and I just said “I´m the guy!” At 17 years old I go down to London and this band is playing with the Boomtown Rats and Doctor and the Medics and I just found me immersed in this whole music scene in London and just going “This is incredible!” I wanted to be a rock star since I was 10 years old, but that just solidified it. It gave me a taste for it, being on the road and seeing how it works and I was just like “I have to do this!”

Were your parents cool with that?

Yeah! My dad was. My mum would´ve preferred if I´d stayed on the farm and gotten a job working at a bank or something. There wasn´t anything wrong with that but she just didn´t really get it. My dad saw how passionate I was about music and how hard I worked at it. I worked really hard. Every spare minute I was writing songs, sending demo tapes off, getting on the bus to London and knocking on record companies´doors and doing all that. I think he saw the intent and the passion and I think of that he was very supportive.

It´s really hard 365 days a year. It´s relentless. It never stops. It´s like being in the music industry, like being a musician. You never stop and it´s got to be in your blood and you´ve got to love it and my dad did. My dad lived for it. He lived for getting up at 5.30 in the morning and work until sunset. I feel the same way about music, but not about farming. I wanted to be a rock n´roller and this was getting in the way. “I don´t want to drive a tractor, I want to play my guitar!”

What would you say was the biggest learning lesson you got from your parents?

To never give up. To work hard and never take anything for granted. Hard work, belief, confidence and humility as well. My dad was a very humble man. I played football quite a bit and if I scored a goal and was bragging about it, he´d go “Yeah, you were great. Game´s gone now. Your next game´s on Saturday. Are you gonna be as good again?” I´m like that with gigs. You´re only as good as your last show and I think I´ve carried that with me.

That generation and my grandparents generation had a different mindset, right?

Yeah, I think that generation and our generation, we´re afraid to speak about our feelings. It´s very much “Shut up and get over it!” or “My leg´s hanging off.” and the response “It doesn´t matter. You´ll grow another one.” and that can be good, but it can also be bad. I think there´s a lot of people that need to speak about their feelings and there´s certainly a lot of people that had stuff happen to them and they need to talk about it. It works both ways, but I think for me, a lot of people moan for the sake of moaning and I hate that. It´s like, if you don´t like what you´re doing, don´t fucking do it. People moan “I don´t wanna be a musician…” “You know what? It´s dead easy. Fucking do it! Because it´s a really good life and there´s a lot of people out there working way harder than you are, hating what they´re doing and don´t have the choice. You do, so either shut up and sing or fucking shut up and fucking don´t!” It´s all black and white to me and for me it´s kind of a philosophy of life, do what makes you happy and do what you believe in. If it´s making you feel good and it´s making other people happy, then you´re doing something right.

You are one of the blessed since your job is the thing you love the most doing?

With all of the changes in the music business, do you feel it´s harder work now in a way or is it kind of the same?

It´s the same. Back in the day when we were signed to major record labels, they were throwing millions of dollars at you and you owed them millions of dollars and we were still making our money off touring and merchandise, not off the record sales, unless you were one of those huge bands. Now, I actually, believe it or not, I make money off record sales, but I still make most of my money from touring and merchandise. I make money off records now because we record them cheaply, we don´t spend as long in the studio and we know roughly what we´re going to sell. I just think you adapt or you´re left behind. I think people should physically go and listen to music because I think it´s the best way to enjoy it, but there´s this thing called technology and it keeps moving forward and forward and you have to embrace it as well. I´m never been this person “Oh, it was better before.” Well , it´s never going to be like that again, so deal with it! Just fucking deal with it, man, the best you can!

Do you feel you´re at your best now, at this stage of your career?

Yes. Absolutely, but everything I´ve gone through and all the stupid decisions and mistakes that I´ve made, have got me to this point and I wouldn´t be at this point if I hadn´t been a fucking idiot back in the day or hadn´t done that… I obviously did some good things, but I also did some really fucking dumb things. It´s definitely got me to this place where I feel I know what works for me, what I´m comfortable doing and I´m not afraid to say no. I look after myself and I feel I´m singing great and I´m playing great. I love writing songs, more so than ever and I´m just really happy and pleased to be where I am in my life. And very lucky too.

You live in LA now and have so for some time. What was the reason for moving there?

It was just love. My wife was working for a record label at the time and I met her and fell in love with her. I´d just bought a house in Ireland and I was literally in it for three months and then I sold it and one of us was going to have to move. It was me and I had always wanted to live in America. It had always been a dream of mine since I was a kid. I used to watch “Starsky & Hutch” and “Dukes of Hazzard” when I was a kid in Belfast. It was an easy decision to make and again, I´m one of those people that if it doesn´t work out, I´ll just move back. It´s no big deal. It could be the best thing I´ve ever done, it could be shit and if it´s shit I´ll come back home. It will suck for a while, but you know what? I´ll get over it. Thankfully it was probably the best decision I´ve ever made. It was tough the first couple of years I was there because I was basically starting from scratch in a new country. I left all my friends and family.

Do you ever see yourself moving back?

Yeah, absolutely! My wife loves Northern Ireland. We got married there and we have tons of family there, my kids love it and eventually one day I think we will. I´ve got one daughter who is still finishing high school, all the other kids are already off to university, so we´ll see what she wants to do. She loves it over there as well and she´s already talking of trying to get into a university in the UK. I think we will. I don´t think we´ll stay in California. I don´t know. We talked about it, so we´ll see. We´re certainly open to the idea.

How do your kids look at you? Do they say “My dad is a Rockstar?”

I think they secretly like it, but they never let me know. I think they like some of the perks when it comes to getting concert tickets or certain clothes from clothing companies, the nice little perks. I think that´s when they like it, but they´re just as embarrassed of me… My 12 year old is like “Dad, drop me off around the corner from school because I don´t wanna be seen getting out…” They´re just kids and they´re no different. I´ve brought them on the road a couple of times and they enjoy the backstage and the tour bus and the catering way more than the gig. They love all that shit. The gig just gets in the way.