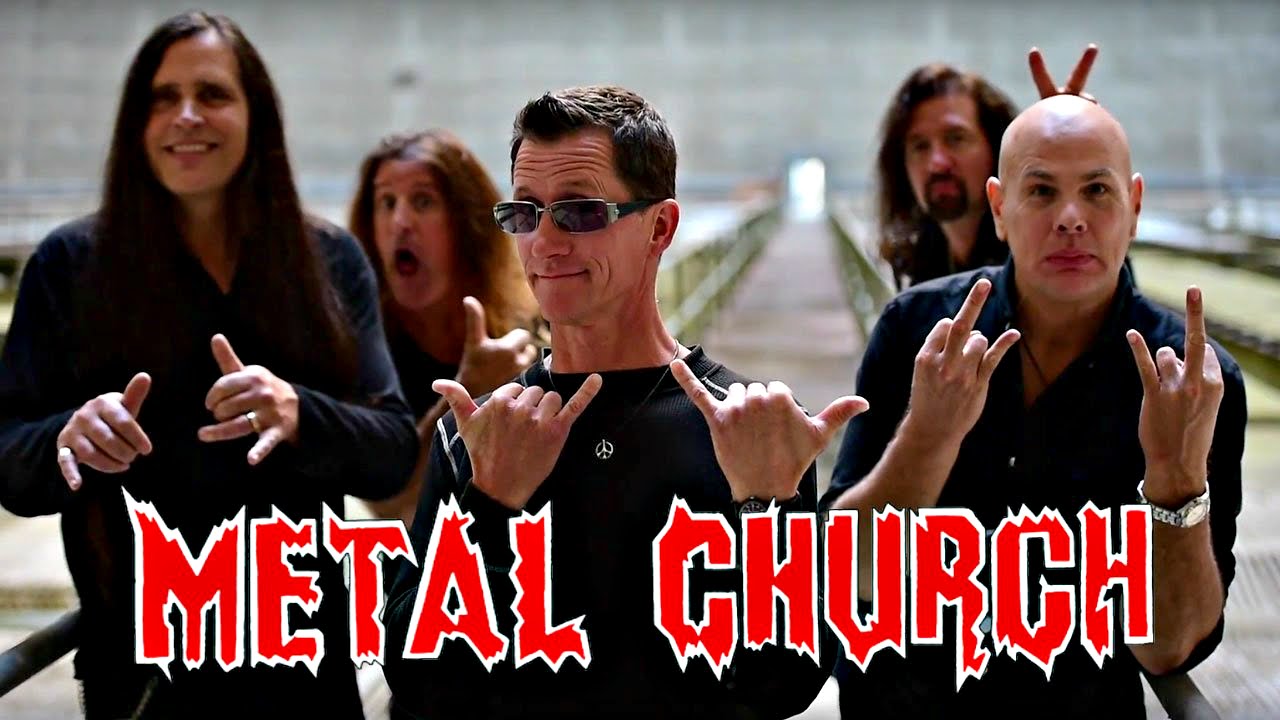 There was a period of time.. I swear, people thought… “Hey, I hear your band´s doing really well.” and I was like “Yeah, we´re doing alright.” I was in a band called Hall AFlame after Metal Church and we just got off the road with ZZ Top and it was alright, but then it took about a month and I realized they got me mixed up with Kurt Cobain (1967-1994) and I was like “Ah fuck, that´s why everybody´s saying that to me! Fuckers!”

Could you name an album that really had an impact on you when you started out?

Grand Funk “Live album” (1970)! Fuck yeah, and I still love them! That album was huge and you´re talking about playing air guitar… me and my buddy had canoe paddles and we would mime that whole album all the time. Just go for it, with canoe paddles. I still love that record and it´s one of the best live albums. They´re playing for their lives. That one and The Who´s “Live at Leeds” (1970), but Grand Funk´s “Live album” was a huge record for me. They were huge in America and they fucking rocked hard too, they really did. They don´t get the respect they deserve because at the tail end of their career they kinda went the commercial way. When all the bands were rocking hard they went “Hey, let´s make money!” and they fucked everything up. At what age did you realize that rock and roll was your thing?

About 5. I saw The Beatles on Ed Sullivan. People that were 15 at that time bought guitars the next day and I wanted drums. Our age group and older now, that´s where it started.

I talked to Ricky Warwick recently about all the great musicians that have passed away in the last two years and he mentioned that we are kinda the first generation where that is happening. Our heroes are actually passing away, either by disease or getting old or whatever. It´s weird.

Yeah, it is. A lot of it too is… the majority of it, is that a lot of the people lived the lifestyle and didn´t stop. I think that´s the actual… it´s catching up with folks. Certainly not all, because it´s just actual disease, but a lot of it. If you did blow for 15-20 years, that fucks your heart up, you know. Thank God I only got a couple of years… (laughs) Now I´m mr Health food – “I had a whole beer today!” (laughs)

A guy like David Bowie, was that someone you listened to?

I love Bowie and I love the early glam stuff in the 70´s. My favorite thing and I still got my head firmly up my ass in that era, the early 70´s rock, because we had everything from Zeppelin to Bowie to ELP and Genesis and Yes and I love the prog stuff. Then you have the hard rock with Sabbath, Heep, Deep Purple and the glam stuff and then you have the southern California Eagles stuff… there was just so much going on in that era and it hadn´t been corporate yet. It was huge and everybody was loving it and that´s when people went “We can make money on this!” and corporate America stepped in and then bands fucked everything up. I´ve got a prog band called Presto Ballet and we´re totally 70´s prog rock, Kansas stuff. I have to have all these other outlets and I´m working on an old school guitar rock album right now too, because I like the first Montrose record and old ZZ Top. The first Montrose record (1973) is one of those albums that´s a desert island album for me. It´s fucking great. It´s eight songs and by the time you´ve heard the whole thing, you just wanna go back. Albums are too long now. For me, it´s that era because that´s what really made me wanna do it, so I still draw from all that to keep me grounded into why I do this. What would you say has been a high point and a low point in your career?

The high point for me I have to say, is the release of “XI” (2016) because it actually charted higher than any album we´ve put out and the fact that that happens now, that´s pretty fucking cool. The fact that Mike came back, he´s one of my best friends in the world and we´re working together and actually in the band together this time, so that is actually one of the high points for me. Initially a high point was getting signed to Elektra back in the 80´s. That was like “Wow, it happened!” and then you get your taste of “Wow, I´m in the business!” and then the business just fucked and kills it for you. Just kills it. “Now we´ve got our bad contracts and we´ve got our rip off stories and all that shit.” That´s why the good thing about the new industry is that it´s a more direct artist to fans. The big numbers aren´t there and it´s a different thing, but the good definitely outweighs the bad, because we still get to do this. There isn´t that record company filter anymore – “He lives, he dies.” or “They´re over 30, they´re done. Next!” That shit´s gone and the people that were in that position are flipping burgers, as they should… little fuckers.

A low point then?

The 90´s. It was fucked up, man and I´m the other Kurt from Aberdeen. There was a period of time.. I swear, people thought… “Hey, I hear your band´s doing really well.” and I was like “Yeah, we´re doing alright.” I was in a band called Hall AFlame after Metal Church and we just got off the road with ZZ Top and it was alright, but then it took about a month and I realized they got me mixed up with Kurt Cobain (1967-1994) and I was like “Ah fuck, that´s why everybody´s saying that to me! Fuckers!” The 90´s was tough. You had to do it because you had to. Everything was changing. The sound had changed. It needed to. Grunge came in and it did what punk rock did in the 70´s and got everything back in perspective, but because it was so industry laden in America, so disposable… “This is what´s cool now. This sucks now.” where over here (Europe) it was more like “This is what´s cool now, but this is still cool too.” In America it was just “Ok, you guys are done!” so we had to fight for it, but the cool thing is that we didn´t go away and we´re still able to play. It´s all good, but it was tough.

Do you get nostalgic about the early days?

The 80´s? I don´t know if it´s necessarily about the 80´s, but it´s more about that innocence before the business came in and before we got signed and we were making money and figured out how it worked. The time up till we got signed and we were out touring with Metallica and when we got off the road from the “Master of puppets” tour, touring the world and we had videos and singles… I had to go get a job and that´s when I had to figure out how it worked and then I started figuring out the word recoupable and how the contracts worked and then the fun got sucked right out of it. (laughs) It was like “Ok, no more fun for you! Now it´s the reality.” I decided to go down a different road and get into the production side of things. In order to stay in the industry, I needed to learn another thing besides playing guitar, so I learned about production and started my own studio. I think that served me in the position now, especially since we make our own records. Were there any cool pranks at the end of that tour?

At the end of the tour in America during “Am I evil”, we came out on pogo sticks. We figured that would be good for “Am I evil” That was fun.

You were talking about being immortal. When Cliff Burton died in that bus accident, did that serve as a wake up call?

Yes and no. Yes, it was kinda like “Hey kids, you´re not immortal!” but at the same time it was like a “Oh yeah? We´re gonna do this anyway.” kinda thing. Not with any disrespect to Cliff. It was an interesting time and I think a lot of it was that Metallica decided to keep moving forward and then we became part of that tour. Lars and I go way back. It was a galvanizing thing. We were just like “Ok, this is our first tragedy.”, the first of that era, the first tragedy and “We are gonna rise above that.” It was weird.

Where do you see Metal Church five years from now? Do you have plans like that?

I don´t take it that far, but it´s not like we don´t plan on doing it. We´ve got a new record and I´ve got a pile of new songs ready for a new album. Presto ballet´s album is coming out in October. Metal Church is just gonna keep going, because we can now. I would like to see Metal Church playing here (Sweden Rock Festival) but maybe playing the main stage. Just keep doing it. As long as people keep showing up, we´ll keep doing it and as long as we can still come up with songs and stuff, why the hell not? It´s all good.