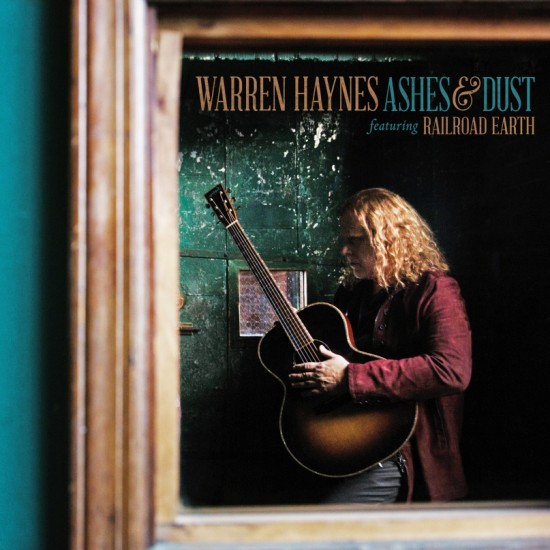 “Joining The Allman Brothers was a huge opportunity for me. The last 25 years have been amazing and I´ve been able to not only play with one of the greatest bands of all time, but also pursue all these other projects that I love and to basically play music the way I want to play and that´s not something I take for granted.”

The title ”Ashes and dust” kinda makes me think of death.

Warren: I don´t think that´s my intention, but yeah, I understand that. To me it´s more of a collection of memories. The title is taken from one of the lyrics in the song “Spots of time”, where the lyric says: “Memories that to me are everything, but to someone else maybe only ashes and dust” It´s just reflections. This album is about looking back and some of the songs were written a long time ago and some of them are brand new, but they all represent different periods of my life and different memories that are very important.

Are you a nostalgic person?

Warren: Not for the most part. I´m very lucky to have the opportunity to stay active and do what I love, so I think that keeps me inspired and keeps me from getting too reflective in general. But a lot of times when you´re writing a song, you tend to think of the past. When did you hook up with the band Railroad Earth?

Warren: They first opened for The Allman Brothers about seven years ago at Red Rocks in Colorado and I got to watch their show and I really enjoyed it. Then we played together a few times and I invited them to join me a couple of times when we were on the same festivals and I was doing a solo acoustic performance. It just kinda clicked and seemed to work well and I started thinking that it might be an interesting approach for my next record, because I was trying to decide how to present these songs in a way that was similar to the vision I had when I wrote them.

Could you see yourself working with those guys again on another album?

Warren: Well, we actually recorded about 30 songs, so there´s probably another album in the can ready to be finished now.

Was there ever a plan of making it into a double album?

Warren: That was actually my original thought. To make like a double CD or two CD´s released simultaneously or something like that, but I started second guessing that idea because it´s so different from anything I´ve ever done. I figured we´d put one album out and see how people respond to it and the response so far has been amazing, so I´m excited to get back into the studio and finish up the stuff we´ve already recorded.

About the Americana sound, there´s a lot of those bands in the US and in Sweden too. Is that the new happening thing right now?

Warren: There seems to be some sort of resurgence in folk influenced music and acoustic instrumentation and that sort of thing. I think what I´m doing is a little different than most of what´s happening in that scene, but at least there´s similar instrumentation. For me, I grew up in the mountains of North Carolina and folk music and Appalachian music and Celtic music and all that stuff, was prevalent, it was everywhere. I was influenced by that music from the time I was a small child. In the beginning I probably didn´t acknowledge liking it, because that was music that my father liked. Then around the age of 13, 14, I started thinking “Wow, this is great music!” and so I started hanging out with bluegrass musicians and singer-songwriters that were older than me and trying to learn from them and that´s been part of my influence ever since. How did the cover of “Gold dust woman” come about?

Warren: I´ve always loved that song and the idea to record it came about because myself and Grace Potter had performed it on stage a few times. It always kinda had a special feeling when we would do it together. Our voices blend well together and she´s a great singer and we kinda stumbled on a nice arrangement, but we´re doing it with more of a kinda Celtic influence and maybe even a little darker version and it seems to work really well. I like the fact that it´s very different from the original, but still maintains that same spirit.

Are there any plans for you playing over here?

Warren: I sure hope so and that´s what I´m trying, because we haven´t played there enough, even with Gov´t Mule and I´m trying to focus and see if we can make that happen.

What are the plans for Gov´t Mule?

Warren: Right now, Matt (Abt) and Jörgen (Carlsson) are doing POA (Planet of the Abts), which is their sideproject, so they´re doing that while I´m doing this. Then when it all finishes, we´ll get back in the studio and start making another Gov´t Mule studio record.

What was it that made you pick up the guitar in the first place?

Warren: I think hearing Cream, Jimi Hendrix and Johnny Winter… Those were the first three guitar heroes for me and after that I started listening to everyone else, but those three made a big impression. I had been playing my brother´s acoustic guitar prior to then, but when I turned 12 I asked my father for an electric guitar, because that was the music that was kinda speaking to me at that time. An electric guitar is the most expressive of all instruments, I think. You can give it to a 100 people and they´ll make it sound a 100 different ways.

Are you self taught or did you take lessons?

Warren: I´m mostly self taught, but I had a teacher for a few weeks that was a blues guitar player in Asheville where I´m from and he encouraged me to be self taught. He was self taught and he could tell that I was obsessed with the guitar and that I was not gonna put it down and he just said “Do what I did and just keep playing.”

Do you have one kinda album that you tend to go back and listen to? A favorite one?

Warren: It changes through the years. I probably have 30 albums that are equally important to me. It just depends on the mode that I´m in. A lot of the times it would be live records. The Allman Brothers “At Fillmore East” (1971) was a big record for me. Little Feat´s live record “Waiting for Columbus” (1978) was a big record for me, but hearing music live, like when I saw Weather Report live, Frank Zappa live, all those sort of things make an impression that´s deeper than the studio recordings can make. You gain more insight into the way the musicians are thinking.

Could you name a high point and a low point in your career so far?

Warren: I can say that I started playing in clubs when I was 14 years old and continued working as a musician my entire life. Somewhere around 24, 25, 26 would be the low point from a financial standpoint because we were all broke. We had six people living in a three bedroom house and we were three months behind on the rent. Then when I started playing with Dickey Betts around that time period, things started really getting better for me and of course joining The Allman Brothers was a huge opportunity for me. The last 25 years have been amazing and I´ve been able to not only play with one of the greatest bands of all time, but also pursue all these other projects that I love and to basically play music the way I want to play and that´s not something I take for granted.

Warren: Artists and bands and musicians in general have to reinvent themselves and figure out where they fit into the current music business and I think it´s a challenge for young artists and bands as well because the opportunities are not as great as they were when I was growing up. But if you look at it from a different angle and create a strategy based on the current reality, it´s still a doable situation. For a band like Gov´t Mule and an artist like myself, we´ve been able to take a different path. We´re doing music the way we want to do it, playing a different setlist every night, we record every show and we offer the mixes of the performances on the internet. We have a website called Muletracks.com where every show we´ve performed since 2004 is available as a download. We´ve been very lucky and sold almost three million songs as downloads and that´s something that works for us, because we play a different show every night. For bands that play the same songs, the same way night after night, that won´t work. For a lot of bands it might be a little scary to open themselves up where your worst night is on sale along with your best night, but that´s what we do. Improvisation is such a big part of what we do, that through the years we´ve kind of adjusted ourselves so that we´re not afraid to make mistakes. The mistakes are part of the music. Over the course of a tour we might play over 100 songs and that of course means that some of them may not be perfect, but what they will be is inspired. It´s inspiring to us to not play the same songs every night. Playing with The Allman Brothers, was there one song you enjoyed playing more than the others?

Warren: I always enjoyed playing “Dreams”, that´s one of my favorites, but all the lengthy improv pieces like “In memory of Elizabeth Reed” and “Whipping post”, songs that we could really stretch out and improvise on, were the most fun, because they took on a new direction every time we played them. I love that music and we made a lot of great music together and I just feel that it was a dream come true opportunity for someone like myself to be in The Allman Brothers for 25 years.

A final thing. Have you ever been approached to play with someone or record with someone, but you had to turn it down and you regretted it?

Warren: I´ve had to turn down things that I wish I were able to do, but it´s always been because I was busy doing something else, so there are no regrets in that way. There were opportunities like one time I had an opportunity to record with Jerry Lee Lewis and I was busy on another session and couldn´t do it. From a historical standpoint that was something that was frustrating, but it came about because I was working, so I guess I should just be thankful to be working. There´s been a lot of situations that I don´t necessarily want to specify, but where I had opportunities to play with certain artists even in a one off sort of situation and I was too busy to do it, but that´s a good reason to miss something I think.