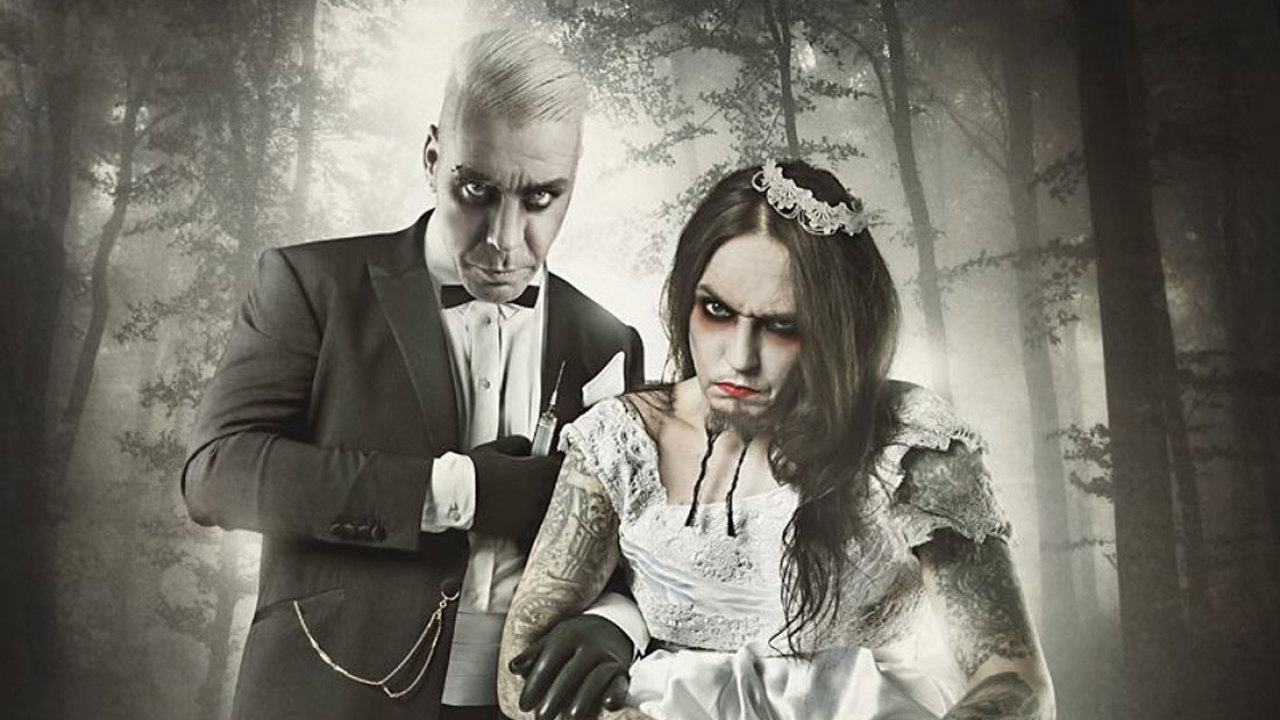 “It´s just the way Till is, I guess. (laughs) I don´t know if you understand German, but I knew a little bit about the Rammstein lyrics, but now he writes in English so I can understand what he´s saying and it inspires me to write music and so on. I guess he´s always been provocative.”

When was the first time you guys met?

Peter: About 14 years ago at some Stockholm bar, maybe? Just seeing each other.

Till: I saw him at Pub Anchor, I know that for sure.

Did you hit it off right away?

Till: No, as I remember it we spent a lot of time in Stockholm because of Jakob Hellner. I´ve been to Stockholm so many times because of Rammstein when it comes to mixing, producing and recording. Stockholm is a small city when it comes to rock bars or clubs and stuff. I was hanging out with the Clawfinger guys and they introduced me to Peter one day, but it was just hello and nothing more. Then later on we caught up for some reason.

When did you start working on the songs for the album?

Peter: Till invited me to Bråvalla Festival when they (Rammstein) were playing there, so we met up before the show and talked. Till said that Rammstein was gonna go on a longer “vacation”, “so maybe we could do something together?” I said “Sure, gimme a call when you have time!” and Till said “We´re just gonna play a few more gigs and then we´ll have a long vacation.” And right after their last gig at Wacken, he called me up and said “Let´s do it now!” and that was probably around September 2013 and that´s how we started the whole thing. Nice and easy and no one knew about anything and we didn´t even know what was gonna happen. We just took one song at a time and now we have a full album. It was kinda funny how we kept everybody on the outside of things. No record label, no nothing. It was only like the closest friends and family that knew.

Which is pretty cool considering social media these days?

Peter: Yeah, kind of. We wanted to do it our own way and we also wanted to make it at our own pace. We didn´t want to have people breathing down our necks or pushing you to get things done. We took the time we needed and thought “When it´s done, it´s done.” and then we presented it for people. Whose idea to record was it initially? Was it you Till?

Till: No, it was a different thing called Jägermeister. (laughs) I really don´t remember, but we went out this night and got really drunk. You know the way it is. We were in each other’s arms and said “One day we have to make a song together.” and Peter said “Yeah, you should come and sing on a Pain album.” and all this blah, blah, blah, but it never happened. We pushed it in front of us for years and I never found the time for it because I was so busy with Rammstein. Then we took two years off and it was the perfect time to do it.

When you started working on the album, did you know exactly what you wanted it to sound like?

Peter: No. The first song we did together was “Ladyboy” and that song comes from Till´s lyrics and he was feeding me with ideas of what could fit to these lyrics he had. He kinda said “Could you make a song that sounds a little bit like this or that?” That´s how we started it. I did the song and I gave it to him and a couple of weeks later he sent me back the vocals he did for it and I was like “Holy shit, we´ve got something here!”

Till: I took it really serious and said “Let´s do one song and put it up on the internet and see how people react?”, but Peter recognized the potential of it and said “Maybe we have a record?” and I went “Yeah, my ass!”. Then after maybe a couple of months we had done five songs and were ready to release an EP or something. We thought about that, but then Peter went on tour with Hypocrisy in South America. Three months later we started again and I went up and down to his place. Everybody knows me now, like all the conductors on the train from Stockholm to Borlänge. We say hello to each other. (laughs)

So you were actually working together in Peter´s studio and not just sending files back and forth?

Till: He did that, but I prepared myself at my place and then I went to his studio to record it. It was the best way to do it.

What was the thought behind naming the project Lindemann, since it kinda makes it sound like it´s your solo project Till?

Till: It was the only thing we could come up with. (laughs)

Peter: It started sinking in after a while. We were brainstorming for a year and we could not come up with anything. If we came up with something good, we googled it and of course there was another band called that. We were fucking around on the internet and at the end it was really desperate, like “Shit, we´ve got a great album, but we have no name!” Someone said, why don´t you call it Lindemann and I kinda took it badly and went “Hey, it´s not a fucking solo project!”

Till: My first idea was “Kraut”, because I like it and it represents some German, Swedish attitude. It sounds German but can be something Swedish too. (laughs) We had “Dicks on flies” and “Flies on dicks”, but all the good names were all taken so I hope Peter likes the name now? And there´s an old TV-show called “Lindeman” is Sweden, right? There is. The first photo that was posted of the project, who came up with that idea?

Peter: I don´t know. Was that you Till?

Till: We had this set up and we were improvising a lot. It was totally clear that we should try the wedding gown and we tried to be like a couple, you know. We fucked around with photoshop and this is the result. One of shitloads of more good stuff. That first one is actually one of the weakest.

Peter: Perhaps not the weakest, but the least provocative. One that you can show the world. The other ones are more fucked up. We´re very happy with the album and we have to have really fucking killer art to go with it. Till and the photographer spent so much time planning all these photos that we have in the booklet. Every photo represents a song, so you can imagine what “Ladyboy” and “Golden shower” looks like. I don´t know if I know anyone who´s ever tried to do this? Even if you don´t like the music, you will definitely like the art. It´s for ears and eyes both.

Do you feel there´s a need to be a bit provocative these days, to kinda reach out to people?

Peter: It´s just the way Till is, I guess. (laughs) I don´t know if you understand German, but I knew a little bit about the Rammstein lyrics, but now he writes in English so I can understand what he´s saying and it inspires me to write music and so on. I guess he´s always been provocative.

Till: It´s very different and very difficult too. I had to kinda crawl into it and Peter encouraged me to do it. To be honest, I wasn´t sure about it. My self confidence was really low, but it became better and better. I researched a lot with the lyrics and even my experience in writing e-mails in English was like zero, so I had to learn a lot and work with dictionaries and shit like that.

Was there ever talk about having German lyrics?

Till: No, I wanted to go far from any similarities to Rammstein, so it was clear that we should do it in English and if I wrote German lyrics, then Peter would have no idea what I was singing about. A song like “Skills in pills”, is that based on your own experiences?

And “Golden shower”? Any personal experiences of that?

Till: Yeah, but I was the one who was peeing. (laughs)

Was it a good experience?

Till: Oh yeah! That´s what she said. (laughs)

Peter: I think Till´s lyrics inspired me to write music and vice versa. But we definitely did the arrangements of the songs together. I had a clear vision of how I wanted it to be and Till had a clear vision of how he wanted it. We just tried whatever was best and I admire him for coming up with all these things that I didn´t even think about and we tried them and they worked.

Till: Peter played all the instruments, he produced it, programmed all of it and recorded everything. He´s a genius in front of the computer and he is the whole band.

With music like this, do you sometimes just have to tell yourself that it´s good enough and not work on it anymore?

Peter: Till tells me. I could go on forever. When I listen to it now, I don´t think I could´ve done anything differently, so I think is the maximum for what I can do at the moment. When the album is out, do you have any plans on performing it live?

Peter: We´re thinking about it. We haven´t got any concrete plans yet, but we also wanna see if people will like it or if they will hate it and want us to go back to our normal jobs. We really don´t know what the reaction is gonna be. It´s hard to say something like “Yeah, we´re gonna conquer the world!” We´re just gonna take it nice and easy and see what the reactions are gonna be like and from there, we´ll set something up.

If it happens, are you gonna be doing clubs or bigger places?

Peter: It depends. If there´s a very weak demand, then we go small.

How do you feel about the music industry today?

Peter: Now for instance, we have nice pictures to go with the album and you get more stuff than just the music. But it´s like it´s always been, you have to follow technology and see how it develops and find new ways to promote yourself. There´s a lot of bands touring now, since they don´t make any money on selling records anymore, but I still think that if you have a good album, you will sell some.

Till: The only thing I can say is that I don´t wanna start a band these days. It´s quite impossible to live off of it. The record companies don´t give you a chance, like in the old days when they went “Here´s a pile of money, go make a good record!” Music these days, in my opinion, is fast produced and homemade and all digital and low budget. As a newcomer you have no chance. Everything is cheap and low budget in my opinion and there´s nothing good coming out these days, except for DJ´s. There´s a whole new and modern DJ culture like Skrillex and those guys. There´s a total change over in the music and the quality in music and the taste in music is totally different. We´re never gonna see bands like Led Zeppelin or Black Sabbath again. It´s over.