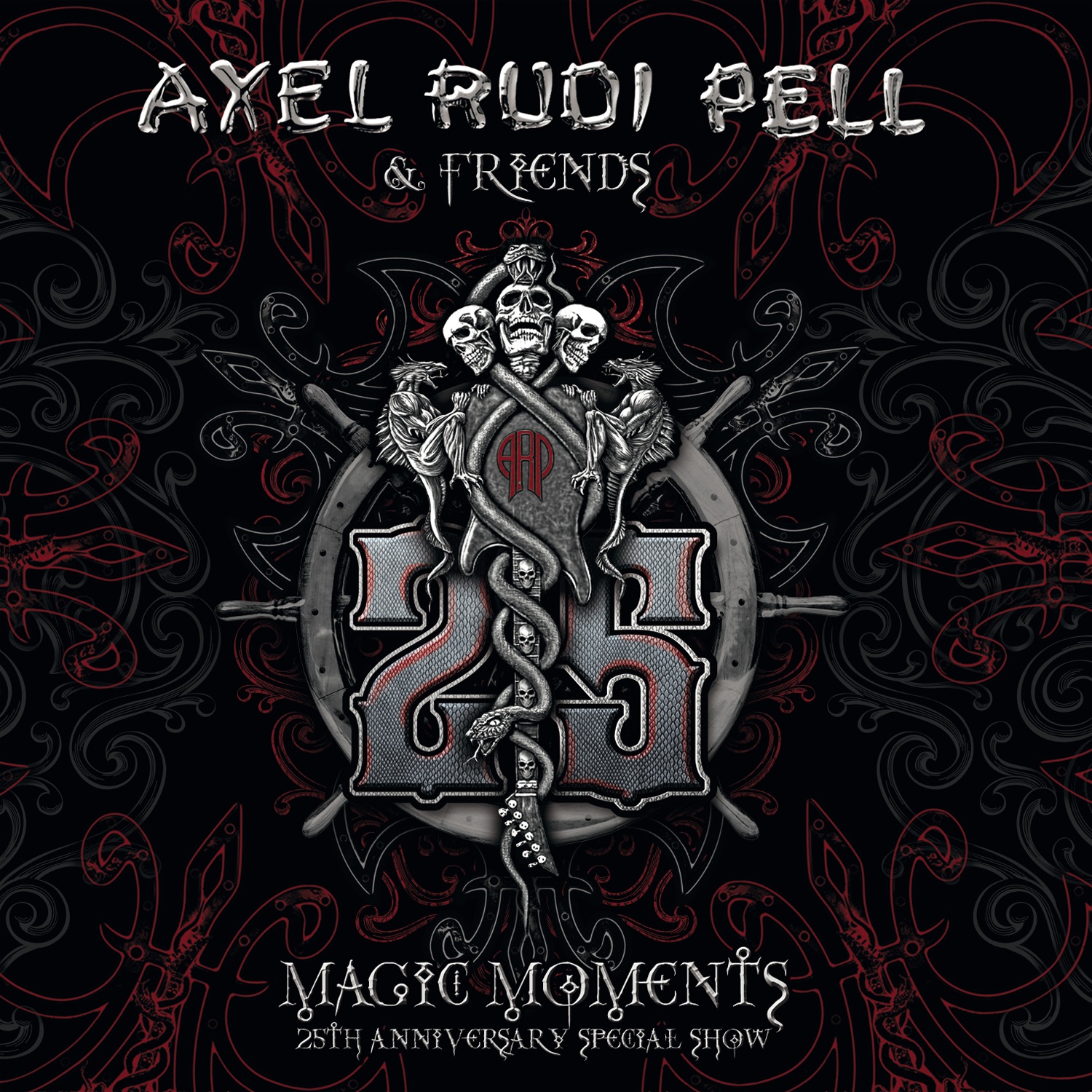 I dreamt it. I don´t know where I got it from, but I know that I lived back then and I was a knight. I was a knight in a big castle and I also got murdered with a big sword. It struck me in the right side of my body. I remember that, but don´t ask me how. I don´t have a clue. By the way, I had the same kinda beard that I have now. I also believe that I once was a dog, but that´s a different story. Don´t ask me what drugs I´m on, because I´m absolutely clean.

What are your memories from the show at Bang Your Head, which is now coming out on DVD and CD, “Magic moments – 25th anniversary  special show” (featuring Jeff Scott Soto, Rob Rock, Dougie White, Graham Bonnet and more)?

Axel: Nothing. I was drunk. (laughs) No, I´m kidding. It was a lot of fun and everything was so easy. It took me a long time to get all these guys together for one show, but in the end it was easy and a very friendly and relaxed atmosphere and everybody had fun. We had a rehearsal one day before the show and it was really cool. I really enjoyed it. It was a highlight to play with such heroes on stage and to celebrate the anniversary. It was a great moment for me. With such a release, are you there for the whole editing process and watching every clip?

Axel: No, I left that to somebody else. I didn´t have the time for it. I think they filmed it all with 25 cameras. It took weeks and months to put it together and I wasn´t there, but I got stuff during the process and watched certain clips and just told them to keep it or change it. I´m really satisfied with the outcome. It was expensive, but not as expensive as the last Rolling Stones live record. (laughs)

Sounds like a high point in your career. What´s been a low point then?

Axel: There nearly wasn´t a low point. There´s been a few low points when singers have said that they can´t do a tour or other members have said the same and the dates been booked. We got stuck somewhere, but I had to do the tour and that´s why we changed members. High points are also all the shows we´ve played and every record we´ve put out. There all my little Babies. You´ve had a number of different musicians in your band over the years. Would you say that just a positive thing or could it also be negative in a way?

Axel: I think it´s very positive. You get a little bit of fresh blood in there and sometimes you reach a point where you need to change something. I never tell anyone; “You´re out of the band, because I don´t like you anymore.” Or something like that. With every new member, we´ve become friends and it´s cool to have some fresh energy come into the band. Bobby Rondenelli for example, has been in the band for two years now and he brought some new blood into the band and it was different than what it was before.

Has he told you any good Ritchie Blackmore stories?

Axel: Oh, of course. (laughs) But I can´t tell you right now. (laughs)

As I understand it, Ritchie Blackmore is one of your favorite guitar players?

Axel: Yes, he was the guy that actually made me start playing the guitar. When I watched Deep Purple on TV at the beginning of the 70´s, I was just like; “Wow, what is this? I wanna be like him.” I wanted to be a guitar hero and play in front of a lot of fans and all that kinda shit. (laughs)

Do you find the stuff he does with Blackmore´s Night just as interesting as his old stuff?

Axel: No, definitely not. When the first Blackmore´s Night album came out, I was quite amazed. Not by the style, but the music. I thought it was a cool idea and maybe get one or two records out, but he´s still doing that and it´s a bit boring for me, because he´s just repeating himself. I like a lot of the songs because he´s a good songwriter, but I can´t listen to that stuff for more than half an hour or so. I saw him live here last year and he´s still really good on the electric guitar. He played the electric guitar on four or five songs and it was great.

How would you say you´ve developed as a guitar player over the years?

Axel: A lot. When I started I didn´t know anything. I wasn´t self taught and I took lessons for 8 or 9 months to learn the basic chords, but then I taught myself. I watched guys playing on TV and I tried to do it myself. I think I´ve developed a lot over the years. I think I´ve found my own style now and I won´t change that. I don´t wanna play like Steve Vai or Yngwie Malmsteen, because they´re in their own world and they´re unreachable for anybody. I play my style and I´m quite satisfied with that. I come up with different riffs and melodies every other month and I get inspired from all over the place.

How do you look at the first Axel Rudi Pell album today? “Wild obsession” came out in 1989. Do you still like it or are there things you´d like to change?

Axel: It´s a tough question, because that was my first baby. I produced it myself. I wouldn´t make it different and it was my first taste of my solo thing and I´m quite proud of it because it worked at the time. The songs aren´t good and the production is shit, but it was very low budget. I think we recorded and mixed it in 10 days or something? But it worked actually. The music industry is completely different today than back in 1989 when your first album came out. What´s your take on that?

Axel: Today, without the internet, promotion would be very difficult. Even if you have all the big metal mags on your side, that´s old news when the magazines are out. The internet is so fast and it´s a good way to let people know about your music. A bad thing is that every song is out there for free. On the same day as my record is out, you have 20-30 different homemade YouTube clips of one of my songs, but you can´t stop it. You´d have to hire 1000 lawyers around the world to take care of it and I can´t afford that. (laughs)

There´s no mystique today. Before the album is out, you´ve already heard snippets of songs or even full songs. Back in the day you knew nothing until the album was out.

Axel: I totally agree and I can´t say anything more on that really. I don´t wanna look at the next 25 years. Maybe you can hear the songs as they´re being recorded in the studio because everybody´s got a microphone implanted in their body. I don´t know. (laughs)

Are you working on a new studio album?

Axel: Yes and I think everybody will be amazed. I always say that, but I´m always telling the truth. We will enter the studio on the 15th of September this year and the album will be out in early January 2016. That´s the plan.

How do you usually write songs?

Axel: I write all the time. Even when the record is out, I write. I can be at the Supermarket buying some meat and a melody pops up and I´ll sing it into my voice recorder on my cell phone. That´s the way I work and then at some point I sit down and put all these snippets together and write real songs with my digital recording equipment at home. It all comes natural. Do you always have the final say in the band when it comes to songs?

Axel: Yes. That´s the only reason why ARP still work. I used to be in the band Steeler, with different guys and they all had a saying in it. It was good to learn from that. If it was like; “Hey guys, you´ve got any songs for ARP?”, then it would be a totally different band. That´s why I say; “Accept it or not.” (laughs) But everybody´s allowed to play whatever they want when we´re in the studio.

I read somewhere that you believe you had a previous life back in the medieval days. True?

Axel: That´s right. I dreamt it. I don´t know where I got it from, but I know that I lived back then and I was a knight. I was a knight in a big castle and I also got murdered with a big sword. It struck me in the right side of my body. I remember that, but don´t ask me how. I don´t have a clue. By the way, I had the same kinda beard that I have now. I also believe that I once was a dog, but that´s a different story. Don´t ask me what drugs I´m on, because I´m absolutely clean. (laughs) I don´t really wanna read too much about that stuff, because then I get too excited about it. I don´t wanna be part of that stuff when everybody says that it´s evil and they want to talk to some ghost. I´m not into that kinda thing. I wanna stay away from that.

Do you remember any kind of Spinal Tap moment that´s happened over the years, like not finding the stage or something?

Axel: That happens at every show. (laughs) Sometimes you walk around and go; “Where the fuck is the stage?” Stuff happens on every tour, nothing spectacular though, and luckily we have a tour manager. (laughs)

Can the Swedish fans look forward to any shows over here?

Axel: Hopefully we can play Sweden Rock Festival again next year. We´re begging for it. (laughs)